Thalassemia patient to Speaker Nasheed: You are 12 years too late 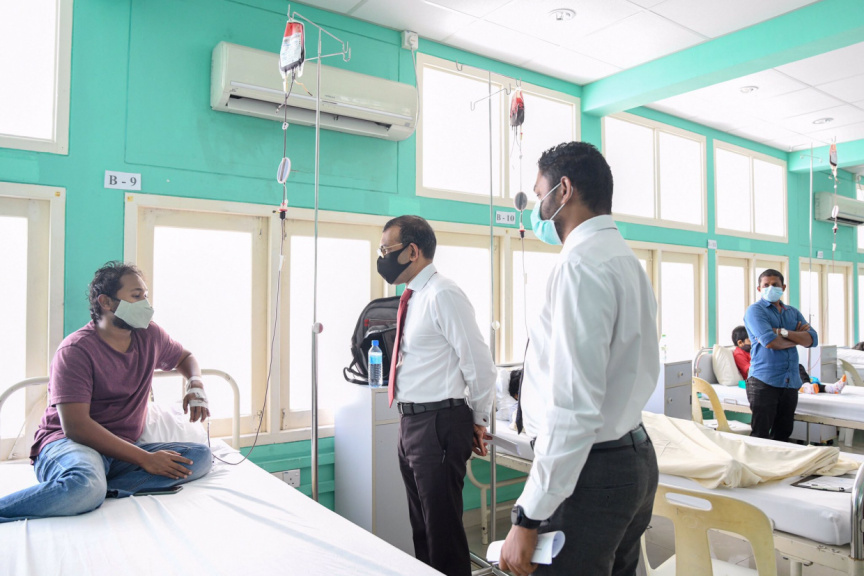 “I really appreciate you visiting @MBS_mv today Mr. Speaker Mohamed Nasheed. But I can’t “Thank You” like my other thalassemia friends have. Here are some reasons.”

This is what a young thalassemia patient said in the beginning of a series of tweets he wrote following the Nasheed’s visit to the National Thalassemia Center on Thursday.

I really appreciate you visiting @MBS_mv today Mr. Speaker @MohamedNasheed. But I can’t “Thank You” like my other thal friends has. Here are some reasons;

1. You’re 12 years late. You were supposed to visit us when you were the president of the Maldives. We tried, you were busy.

He wrote four reasons why he, along with the rest of the thalassemia community, has felt wronged by him.

He questioned why Nasheed, who had served as Maldivian president from 2008 to 2012, had not visited the Thalassemia Center during his presidency.

“You’re 12 years late. You were supposed to visit us when you were the president of the Maldives. We tried, you were busy,” he wrote.

ONLY PRESIDENT UNAVAILABLE FOR AN APPOINTMENT

He wrote that Nasheed had been the only Maldivian president the thalassemia community had been unable to secure an appointment from to share their grievances.

“You’re the only president that we could not get an appointment to share our grievances,” he wrote.

He questioned why Nasheed had vetoed the legislature passed by the Parliament to control thalassemia, not once, but three times.

“Thalassemia bill was passed by the parliament and sent to you 3 times, but for some reason, you have vetoed every single time,” he wrote.

He wrote that the thalassemia community sent Nasheed sent multiple letters, all of which had gone unanswered.

He said that some of the letters had been sent at a time when the thalassemia community had lacked essential medical supplies for over three months.

“We have sent you multiple letters regarding the various issues (it was a time that we weren’t getting our medical supplies for 3 or more months) and to this day, we have not received any reply whatsoever,” he wrote.

HOPEFUL AND EXCITED TO MEET AT LAST

He wrote that while he found some of Nasheed’s past actions troubling, he, along with the rest of the thalassemia community, had been hopeful and excited to meet him at last.

But he felt the visit was rushed.

“We were waiting for you to approach us and ask us our concerns. But you were in a hurry to leave. We tried our best to get a hold of you, but sadly [Kendhikulhudhoo]MP [Ahmed] Easa swooped between our friend and Mr. Speaker,” he wrote.

He said the short visit isn’t enough for Nasheed to gain a true understanding of the plight of the thalassemia community.

“Today, you have seen only what they wanted you to see. The entire @MBS_mv was literally polished up by the time you came there. Everything you saw was a facade. Next time, (if there’s ever going to be one) try a surprise visit for a change. Then you’ll see the big picture,” he wrote.

He stressed that his tweets aren’t political, and urged that people refrain from politicizing the issue.

“Today we’re here, tweeting for our rights because, none of the previous governments bothered to listen our concerns or help us,” he wrote.

He said that while he appreciates Nasheed’s visit, he needs for the country’s lawmakers to make a real impact by finding a solution to the problems facing the thalassemia community.

“So, yeah... I appreciate you visiting there and all. But no, I cannot Thank You. Yet! We have a lot more work to do. You, me, us and your MPs. If you and your MPs could find us a solution, I/we will forever be grateful and thankful to you,” he wrote.

Many within the thalassemia community have taken to social media to have their voices heard, expressing concern they aren’t receiving sufficient attention from the authorities and have been largely ignored.

This is how our meds look like, I've been taking this for the past year. 1st batch was discarded due to our concerns but we weren't inform about the reason for this discoloration. Laterly, we were asked to continue the 2nd batch though it was like this. https://t.co/oDAAJ7wSIG pic.twitter.com/pna3Uu3NlF

They have taken to social media platforms to voice concern over the quality of their medication, specially the last batch of citroprone, an oral iron-chelating agent that reduces liver iron concentration and serum ferritin levels.