From the gates of school to a fishing vessel, determined to never debark 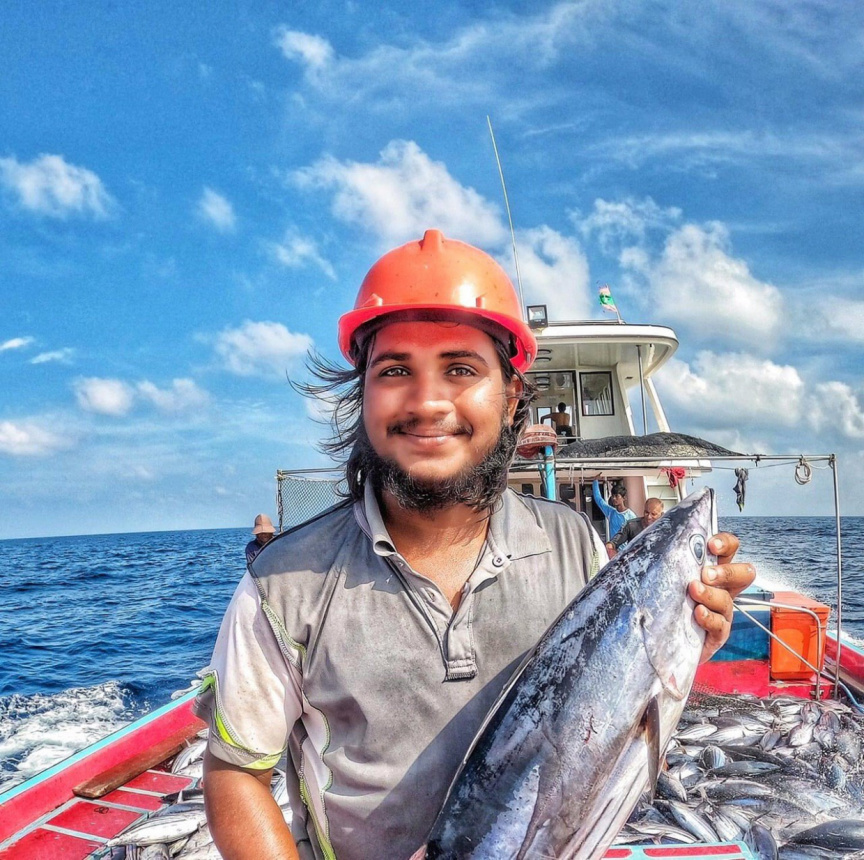 When Adam Farish finished school five years ago, he didn’t have much planned for his future. The 16-year old from L. Fonadhoo found it difficult to get employed. Not wanting to wait around, Farish decided to once again pick up the pole line he had used to fish near the beach during his childhood.

He donned on the fisherman’s attire after waving goodbye to his school uniform, determined to never let go of the pole after he embarked on to a fishing boat. The jobs that had eluded him, led to something he had actually grown fond of, and now fishing, is his entire life.

“There was nothing decided for me to do when I was younger. Entered fishing, because I wasn't 18 and couldn’t get a job when I finished school. I thought about it and suddenly decided to go fishing. And it became something awesome.” said Farish.

Fonadhoo is not one of the islands of the country synonymous with fishing, unlike some islands such as Gemanafushi. So, Farish was left to venture onto a boat from Maamendhoo in the same atoll named “Araamu.” After two years on the boat, he jumped ship to “Dolphin”, a boat from the same island. After almost three years, he is now working on a boat from Gan.

“I travel to Gan every time from Fonadhoo. I was fishing on boats from other islands before. Now I go on the bike to Gan, whenever I have to go fishing.” said Farish.

Fishing is extremely hard and immaculate work. Most of it is done in the scorching heat and pouring rain. Bait fishing has to be done at dusk. Divers have to jump into the ocean in near darkness to cast the net. There are no specific duty hours set, only days when the work is finished early or late. Days full of luck and days of not so much luck.

Farish stresses that it is not dirty work or work that is beneath anyone. He maintains that the work is less stressful and better for the mind and body compared to working in an office.

Farish said “It is indeed very different, working in an office and going fishing. In school, I also experienced some aspects of office work, I did go to an office once. There is always some responsibility on you. That’s not the case in fishing,”

“There isn't much stress or worry in fishing. You just have to behave as normal. When you do what you do, you get paid.”

Farish takes home more than the average office employee who works eight hours. Even on bad days, he gets to collect more than MVR 15,000. On good days, the number is twice as high.

The turn of the age has also turned the mindset and perception of fishing in people’s eyes. Back in the days, fishing was for everyone, young and old. Fishermen were well respected. However, the development of other areas has led to the sector being overshadowed. The number of youths even considering fishing went down. People actually began to think that fishing was for the uneducated.

This was what led to Farish and a couple of other youths to determine that they wanted to bring a change to this. That fishing was not for a specific age group and that it was something “awesome” for youths to cast their lines. The group is working to attract and portray this message to youths via social media.

“I want to say to all youths, that this is an awesome thing to do. It would be awesome if more came into this. Most go for office work because they don't know how to fish. If they knew how awesome this is, they would come for this. I haven't seen anyone that came fishing and returned back to working in an office or a resort.” said Farish.

With technology, fishing has also turned a corner. A drone named “En Hoadhi” literally translating into "bait finder" has been introduced. Equipment that measures the temperature of the water has been installed in boats, while the boats have also bigger and better with time.

Describing the change, Farish said “You can go fishing with ease and comfort now. Some boats, have ACs installed with separate beds for everyone. Cupboards for personal items that are lockable. It is awesome.”

Other than fishing, what brings peace to Farish is the scenic beauty of the ocean. The islands on the horizon and the pristine underwater life is something that truly brings content to him. He has learned many lessons from the tranquil life of nature with the hot fish soup fresh fish as his meals.

He only gained words of aspiration and courage from his family and friends when he set out on his adventure, and now he wants nothing else but to reach the top of the field. To obtain any and all training and education in the sector.

He has now completed a diving course and has completed the last level of a navigational course. What lies ahead for Farish now, is to pass on his knowledge to other youths.

Farish now wants to lead his own crew and boat after gaining sufficient experience, to venture the high seas. He is determined to color his dreams with a will power equal to any strong tide.