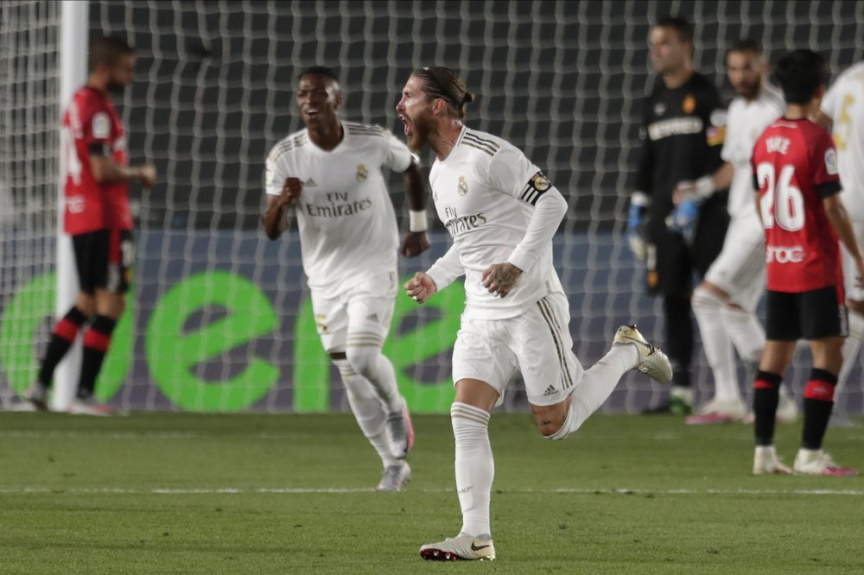 MADRID (AP) — Amid more refereeing controversy and the record-breaking debut of a 15-year-old player, Real Madrid defeated Mallorca 2-0 on Wednesday to keep its perfect record intact after the pandemic break and move back atop the Spanish league.

Vinícius Júnior and Sergio Ramos scored a goal in each half as Madrid won its fourth in a row to retake the lead from Barcelona, which on Tuesday edged Athletic Bilbao 1-0. Both teams are tied with 68 points but Madrid is ahead on the tiebreakers.

Mallorca’s 15-year-old Luka Romero, dubbed by local media as the “new Lionel Messi,” became the youngest player to appear in a Spanish league match. The attacking midfielder — born in Mexico from Argentine parents — is a few weeks younger than Francisco “Sansón” Bao Rodríguez was when he set the record by debuting with Celta Vigo in the 1939-40 season. Romero entered the match in the 83rd minute, getting his first touch of the ball a few minutes later.

Mallorca complained of a foul against one of its players in the buildup that led to Vinícius Júnior opener in the 19th minute, but the goal stood after video review. The visitors claimed that Dani Carvajal made an illegal block on Dani Rodríguez to allow Madrid to regain possession and score. Vinícius Júnior found the net with a chip shot over goalkeeper Manolo Reina after a pass by Luka Modric.

The non-call came after Madrid coach Zinedine Zidane spent much of the week defending his team from accusations that it was benefiting from refereeing decisions. Madrid had video review decisions go its way in each of its first three victories after the break.

“There is a lot of talk about that because we are leading,” Ramos said. “It wasn’t like that when we weren’t up front. They make it look like we have to thank the referees for being the leaders. People shouldn’t be making up movie stories.”

Ramos scored his third goal since the league resumed with a free kick that curled over the wall in the 56th. It was the 69th league goal overall for Ramos, who on Sunday overtook Ronald Koeman as the top scoring defender in the history of the league. He has a career-high eight league goals this season.

Madrid is playing at the Alfredo Di Stéfano Stadium at the club’s training center as the Santiago Bernabéu is being renovated.

Mallorca, still winless after the break, stayed just inside the relegation zone.

Madrid next visits Espanyol on Sunday, while Barcelona plays at Celta Vigo on Saturday.

“We have seven finals ahead of us,” Zidane said. “This will only be decided in the very end.”

Real Sociedad lost 1-0 to Celta Vigo to remain winless after the pandemic break and lose ground in the fight for Champions League places.

It was the third straight loss for Sociedad after opening with a draw when the league resumed. The result left the Basque Country club in seventh place, six points from fourth-place Sevilla in the final Champions League spot.

Sociedad was in fourth place when the league was halted after winning four of its previous five matches. It can drop to eighth after the round is completed. The club was coming off another home loss, against Real Madrid.

“We are not happy with our performance after the break,” Sociedad defender Aritz Elustondo said.

Forward Iago Aspas scored Celta’s winner by converting a penalty just before halftime. It was the team’s second consecutive victory, coming after a 6-0 rout of Alavés.

The Vigo team opened a seven-point gap to Mallorca, the first team inside the relegation zone.