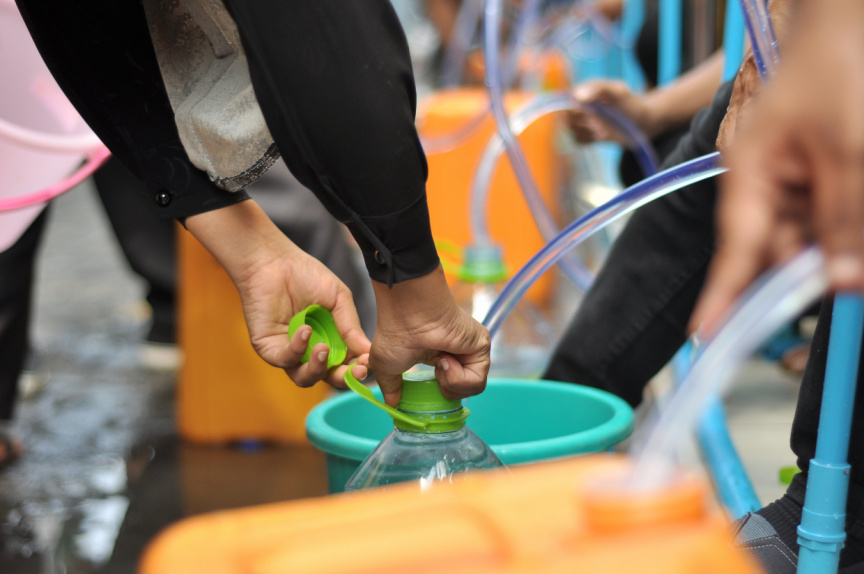 People gather to collect water amid the water crisis in Male' City in 2014. (File Photo/Sun)

A report released by the Auditor General’s Office following its audit of the Water Crisis Management Fund shows it released MVR 12.4 million more than was spent by the Male’ Water and Sewerage Company (MWSC) to manage the crisis.

The water crisis in Male’ City took place in 2014, after a fire at MWSC cut off water supply to the residents of the populous city.

The audit reveals the fund was established without a mandate on how proceeds from the fund will be spent.

The USD and MVR accounts opened at the Bank of Maldives for the fund collected total MVR 127.52 million. It included MVR 52.52 in grants and donations, and a MVR 75 million interest-free loan – which was repaid within the set one-year period.

While the Finance Ministry released MVR 10.65 million to cover the bills it deemed to be expenses related to the water crisis, the auditors found they were unable to confirm whether the funds should have been released to MWSC because the fund lacked an official mandate.

The auditors were also unable to determine how the MVR 3.84 million in bills were deemed to be unrelated expenses, and found no supporting documents.

The auditors found MWSC was released MVR 41.17 to cover damages from the crisis, out of which the company spent MVR 28.42 million. The funds were spent to procure panel boards and emergency power panels, and to cover power operations and administrative expenses.

The auditors found MWSC was therefore released MVR 12.75 million more than it had spent.

They also noted that the lack of official mandate had resulted in difficulties in managing the fund.

The Auditor General recommended that such funds be treated as trust funds, and that trust statements be prepared as established under Finance Act.

He also recommended that relevant institutions establish mandates before spending grants and donations received by the State for specific purposes.

The audit report refers to a report issued by National Disaster Management Authority which says that prior to the establishment of the Water Crisis Management Fund, the authorities had discussed that proceeds from the fund would be utilized to strengthen the Male’ City water reserve, to manage the expenses by MWSC to recover from the crisis which the insurance does not cover, and to recover the government’s spending to manage the crisis.

While the management of the fund was transferred from Finance Ministry to the National Disaster Management Authority in April, 2015, the authority did not receive a mandate on how proceeds from the fund were to be utilized.

The auditors also found that the lack of official mandate posed challenges in paying for the bills submitted by MWSC to the National Disaster Management Authority.

AG calls for probe into award of island to Dheebaja

AG instructs against compensation to Dheebaja