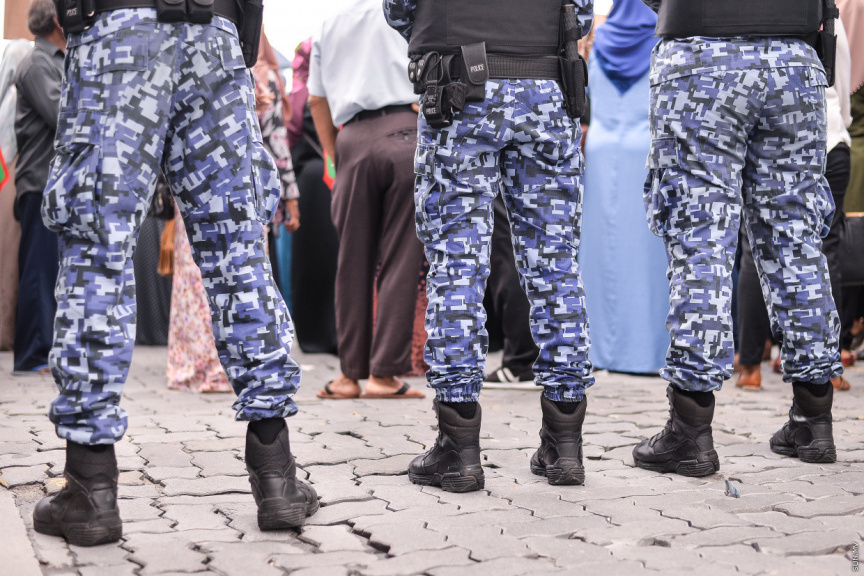 Police officers form a line to hold off protesters outside the Criminal Court on November 28, 2019. (File Photo/Sun/Fayaz Moosa)

Maldives Police Service’s disciplinary board, on Monday, dismissed three police officers accused of assaulting a member of public in an incident which took place in late 2019.

Commissioner of Police Mohamed Hameed wrote on Twitter on Tuesday morning that the incident in question had taken place on August 5, 2019.

He said that the disciplinary board, in addition to dismissing three police officers accused of assaulting a civilian, has also demoted a fourth police officer involved in the incident.

A police spokesperson said the four officers were penalized following an internal investigation run by the police professional command following a complaint they beat up and violated the dignity of a suspect taken into custody at the Fishermen’s Park in Male’ City on August 5, 2019.

The suspect in question was wanted in connection to a theft, and was suspected of attempting to steal a motorcycle parked at the Fishermen’s Park when he was found and taken into custody, said the spokesperson.

The officers will have seven days to appeal the disciplinary board’s decision.

He also said that police reform is possible and in everyone’s interest, but that it must be approached with civility.

“Ridiculing is unnecessary,” he said.

The incident in August had come at the heels of another case of police brutality in which seven Drug Enforcement Department (DED) officers were accused of beating up a suspect during a drug raid on M. Ujaalaage in Male’ City in July, a 36-year-old Bangladeshi man.

The case came to light after the officers were caught on video beating up the suspect.

The disciplinary board, in September 2019, decided to demote the seven DED officers, transfer them to other departments, and relieve them of commendations for discipline.

The decision was appealed by Hameed, who found the penalties to be far lighter than what was usually meted out for such offenses.

The officers involved have yet to be allowed back to duty despite the expiration of their suspension. The police said at the time that they will not be allowed to return to duty until a decision is finalized.

The officers also had a criminal probe conducted against them, which was sent for duty prosecution to the Prosecutor General’s Office – a process in which the investigative agency and the PG’s Office exchange information and counsel.