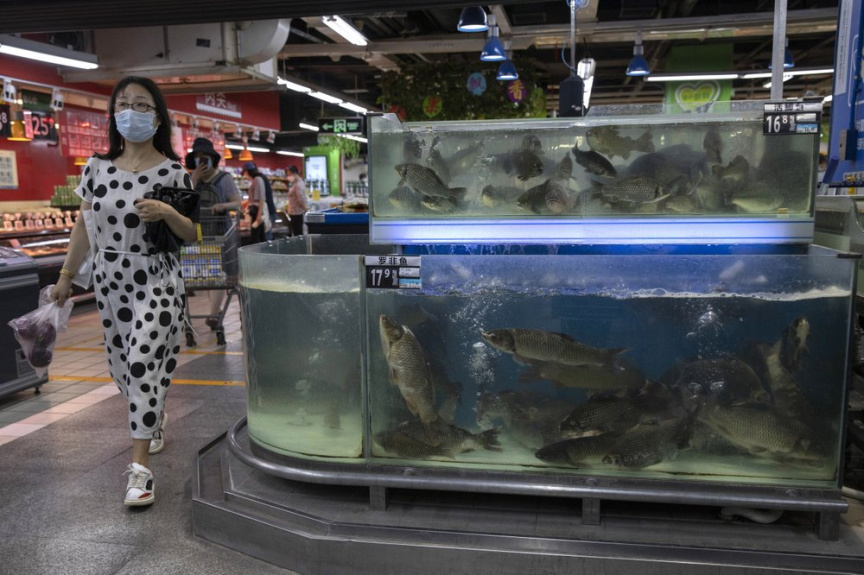 A resident wearing a face mask to curb the spread of the coronavirus walk passes live fish on display at a supermarket in Beijing, Monday, June 15, 2020. (AP Photo/Ng Han Guan)

BEIJING (AP) — China reported 40 more coronavirus infections Tuesday as it increased testing and lockdown measures in parts of the capital to control what appeared to be its largest outbreak in more than two months.

The new cases included 27 in Beijing where a fresh outbreak has been traced to the city’s largest wholesale market and bring the city’s total to 106 since Friday.

Tests were administered to workers at the Xinfadi market, anyone who had visited it in the past two weeks or anyone who had come in contact with either group. Fresh meat and seafood in the city and elsewhere in China was also being inspected.

Experts say food is an unlikely source of transmission though the virus can survive on surfaces and packaging for a period of time. An infected person who visited or worked at the market is considered a more likely source.

Residential communities around the market were put under lockdown, along with the area around a second market, where three cases were confirmed. In all, 90,000 people are affected in the two neighborhoods in the city of 20 million.

Beijing is also barring residents of areas considered at high risk from leaving the city, in an attempt to prevent the new outbreak in the capital from spreading to other parts of the country, health authorities say. Those from such areas who have already left must report to local health bureaus as soon as possible.

Numbers of passengers on buses, trains and subways will also be limited and all will be required to wear masks. The outbreak may also be disrupting plans to restart China Super League soccer matches as early as next month. Coaches and players for Beijing Guoan, the city’s top team have been tested and given a week off because their training camp is in the same district as the source of the latest outbreak, local media reported Tuesday.

China had relaxed most of its controls after the ruling Communist Party declared victory over the virus in March, but Beijing suspended Monday’s planned restart of some primary schools and reversed the relaxation of some social isolation measures.

Of the new cases reported by the health ministry Tuesday, eight were imported by returning Chinese travelers, four were reported in Hebei province next to the capital and another was detected in the southwestern province of Sichuan that has seen relatively few cases.

No new deaths were reported and 210 people remained in treatment while another 114 are being monitored in isolation for showing signs of COVID-19 or for testing positive for the virus but showing no symptoms. China has reported 4,634 deaths from COVID-19 among 83,064 cases.

— New Zealand is no longer free from the coronavirus after two women who flew from London to see a dying parent tested positive. The cases sparked a round of testing for anybody who might have been close to them, including their flight’s fellow passengers and crew, staff members at a hotel and a family member. The women are isolated and have delayed the funeral of their parent until they have recovered. New Zealand has counted 22 deaths from COVID-19, and until Tuesday, everyone else known to be infected with the virus had recovered. In total, New Zealand has had just over 1,500 cases.

— Philippine officials placed the central city of Cebu back under a strict lockdown and retained quarantine restrictions in the capital for another two weeks as coronavirus infections continue to spike alarmingly. President Rodrigo Duterte approved the moves Monday night, saying the virus campaign was not over. Many of the country’s nearly 26,500 infections and 1,000 deaths have been recorded in the Manila region.

— South Korea has reported 34 new cases of COVID-19, half of them in the densely populated Seoul metropolitan area where health officials have been scrambling to stem transmissions. The figures by South Korea’s Centers for Disease Control and Prevention on Tuesday brought the country’s caseload to 12,155 infections, including 278 deaths. Thirteen of the new cases were linked to passengers arriving from abroad. Despite concerns over rising infections in the greater capital area, the Seoul government has so far resisted calls to reimpose stronger social distancing guidelines out of economic concerns.

WHO to visit China as part of COVID-19 investigation