From the sea, to retreat: Sendi’s retirement story 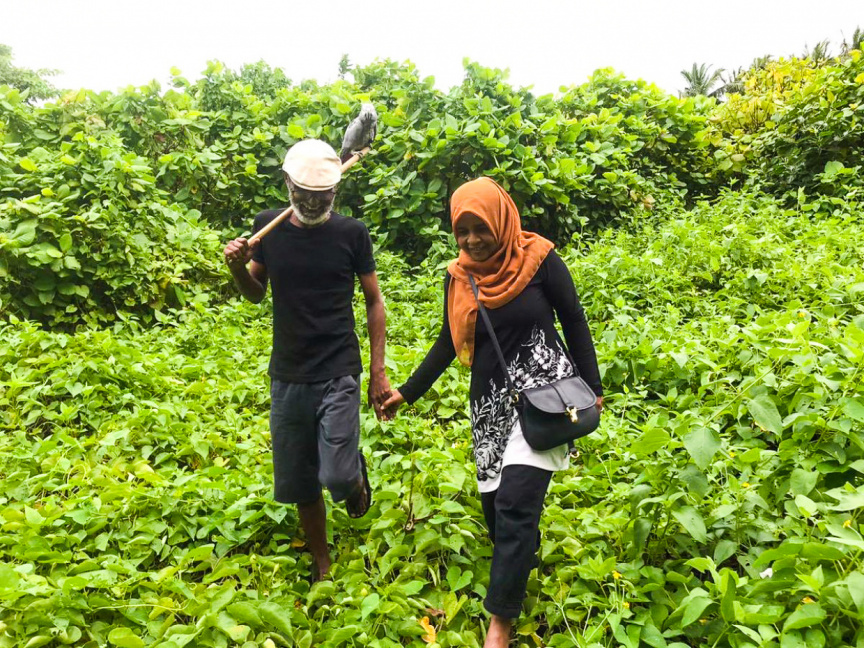 Hussain Rasheed (Sendi) with his wife in Baa Fulhadhoo -- (Photo/Sendi)

As a little boy, Hussain Rasheed (Sendi) would tail his father on snorkeling expeditions. He would go surfboard at the surf break during the weekends. Young Sendi was just a Majeediya schoolboy when he plunged on his first dive--it was to photograph the Maldives Victory wreck near Hulhule in 1981. Later he worked as an underwater videographer for a resort.

The 1980s were a time with just a handful of local divers. Sendi completed a series of diving and divemaster courses, establishing the strong foundations of his celebrated career. The veteran diver produced a vast number of local diving instructors and stepped forward on a noble mission to remould the Maldivian dive industry that was exclusively being run by foreign divers.

A vast number of letters were penned by Sendi in 2004, appealing tourism stakeholders to give local divers a shot in running dive centers at their properties. Tourism magnate Qasim Ibrahim acknowledged the proposal and took Sendi in--the first locally-run dive center in a tourist property was established on Holiday Island Resort with Sendi as the manager. This venture later expanded to a watersports institute, which would later evolve into Villa College's Faculty of Marine Studies in the late 2000s, and Sendi would be the Dean.

The celebrated career spanning 37 years was fruitful indeed. Hussain Rasheed had produced some 1,600 local divers, of which some have reached pinnacles of the industry. Sendi played a major role in forming the Maldivian Coast Guard's Diving Unit and also organizing the famous underwater cabinet session in 2009--a famous spectacle that grabbed the whole world's eyes to the Maldives.

On one fine 2018 day. Sendi decided his work was far too risky. More than 300 people dived every day, and the pressure of being responsible over their lives while out in the ocean was too much to handle. Now 50 years old, the veteran divemaster quit his job and went home. His thoughts ran around relocating to a quiet island, live a peaceful and easy-going life.

However, he had then not decided where to.

Sendi was not very keen on taking up one of his friend's offer to manage a dive center in Fulhadhoo, Baa Atoll--he had just retired! Instead, he passed on the offer to his son-in-law (also a diver) who gladly accepted and relocated to Fulhadhoo.

Fulhadhoo is a special little island on a separate geographical atoll, south of South Maalhosmadulu (Baa) Atoll. The Goifulhafehendhoo geographical atoll, the main three islands (Goidhoo, Fulhadhoo, and Fehendhoo), and the beautiful lagoon they lay on is a spectacular sight. This atoll is the location where French navigator François Pyrard de Laval's unfortunate shipwreck took place, and Fulhadhoo was the very island he was stepped on and spent a few tough weeks on.

Goifulhafehendhoo Atoll, or Horsburgh Atoll on the Admiralty Chart, had always fascinated Sendi. The islands and lagoons are too magnificent. Once, he visited his daughter and son-in-law and he was mindblown by beauty and serenity of Fulhadhoo.

"I went straight-up crazy. I always thought of retiring to a peaceful island away from havoc. Later my wife came for a visit too and suggested relocating. She said, 'let's find a house here, we should not leave those two here alone with the diving school'",

And thus it was decided. He bought land from Fulhadhoo and is currently building a home for his little family, complete with guest rooms for visiting family and friends. Until then, Sendi and his wife are living as tenants, at a house on Fulhadhoo's beachfront. Swing the windows open and he sees the ocean, a major companion of his life.

A day in his life

Sendi's earliest memories are of his family's many voyages around the country. His family would sail to Enboodhoofinolhu just south of Male on day trips. They would catch fish, eat, and enjoy together. Holiday seasons were of his rather large family voyaging to the northern atolls. His father Ismail Rasheed has family in Vaikaradhoo, North Thiladhunmathi (Haa Dhaalu) Atoll.

Eriyadhoo in North Miladhunmadulu (Shaviyani) Atoll was an island leased to his father Ismail Rasheed for agricultural activities. The family frequented at Eriyadhoo. They lived in cadjan shacks, bathed from wells, and ate his father's agricultural produce and freshly caught fish.

Today, Sendi's lifestyle revolves around being simple and carefree. His mornings start with Fajr prayers, followed by a trip down to the beach to catch some fish. If he is lucky, he would catch a han'dhi.

"My wife does not like me fishing too much. She complains that our fridge is always full and bans me to go fishing anymore. Sometimes I empty out the fridge by sending the contents of it to people in Male, so I can go fish again," Sendi said, chuckling.

Right before midday, the retired divemaster would stock water at home, clean the floors, and rest. After Dhuhr prayers and lunch, he would take a walk around the beach with his pet African Grey parrot of 18 years.

Sendi would also visit neighbors and engage in small talk. According to him, the people of Fulhadhoo are too precious.

"A prime reason we chose Fulhadhoo is the people. The extremely sweet and friendly people. Anyone who steps outside would return home bearing some sort of food offering from a neighbor. Nobody would ever go hungry here," said Sendi.

Goal to live on zero

Sendi's father Ismail Rasheed cultivated many different vegetables in the Maldives. He had brought an array of saplings from abroad. His island, Eriyadhoo, would be blossoming with passionfruit, lime, chili, cucumber, and watermelons.

Retiring to Fulhadhoo was the perfect opportunity for Sendi to take on this experience himself too. He acquired some agricultural land and is currently attempting to grow pumpkins and banana palms too. He longs to grow binbi (finger millet) to feed his grandkids food made from binbi flour, just like how things were done during his own childhood.

"My goal is to live on zero, without spending money. If I am able to grow maize, I will mill it and produce flour. I am researching whether I can produce sugar from sugarcane. If that does not work out, I shall learn how to make palm sugar from coconut toddy,"

"When its time to eat, I just have to walk two minutes and pluck some maabulhaa or some dhiguthiyara (septicweed). I must live a healthy lifestyle when I have exceeded 50, right?" he said.

Now seldom does this distinguished veteran visit Male, perhaps to deliver a lecture at Villa college or to visit his mother. But every time he steps on the city, he is counting every second impatiently to return to his new home of Fulhadhoo.