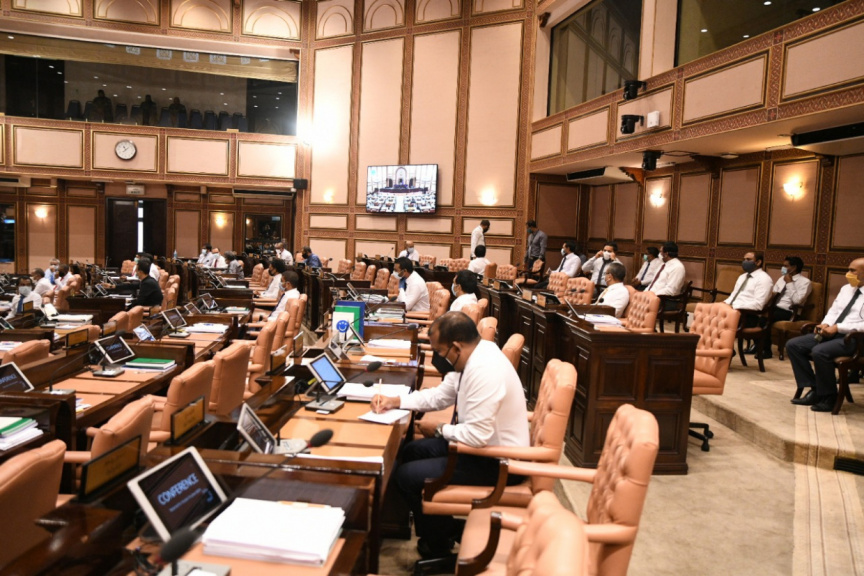 Parliamentarians during a sitting (Photo/People's Majlis)

The Maldivian Democratic Party is deeply divided over the government-proposed constitutional amendment to extend the current term set to expire just next Wednesday.

The constitutional amendment to extend term of incumbent councilors was designed to work alongside the ratified sunset law ratified in April that allowed the Local Councils election scheduled earlier that month to be postponed as late as January 6, 2021.

Both the Attorney General and the Majlis' Counsel General's legal opinions on the subject stated that a general law cannot be used to override a constitutional provision, and that the only solution is to amend the constitution.

The motion presented by MDP lawmaker for Hanimaadhoo Constituency Abdul Gafoor Moosa was passed during last night's Majlis sitting, with 61 out of 62 attending MPs voting in favor. The motion was presented after Parliament Speaker, former President Mohamed Nasheed said during Wednesday's daytime sitting, that MPs found it difficult acept the Attorney General and Counsel General's legal opinions. And that the next course of action was to seek the top court's opinion.

Though the constitutional amendment faced aversion from some MDP parliamentarians, the government's proposal sponsored by MDP MP for Bilendhoo Constituency Ahmed Haleem, was accepted by the Majlis with 60 MPs voting in favor. The bill was sent for consideration of the Committee of the whole House.