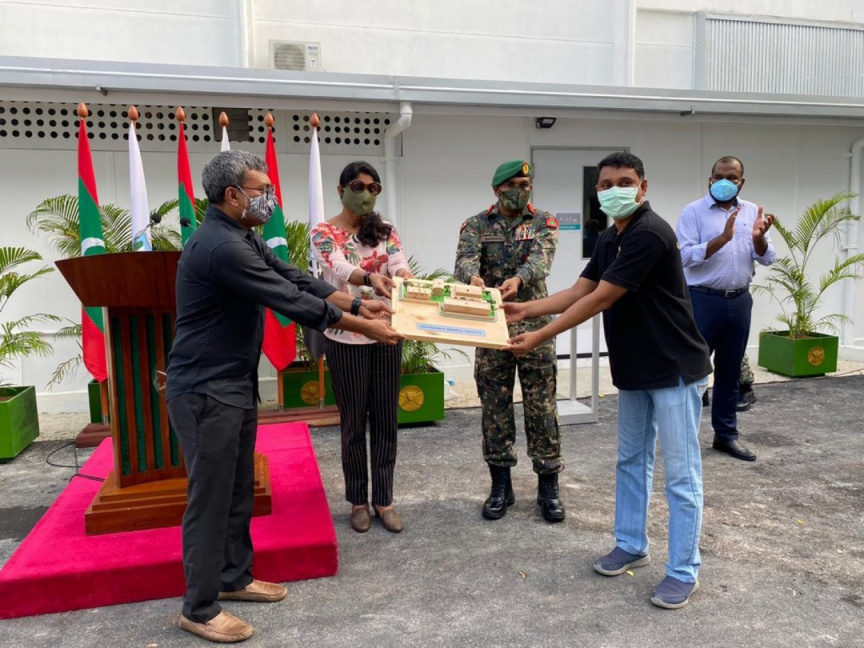 Ceremony to mark the handover of the COVID-19 village facility in Hulhumale'.

A government facility to treat COVID-19 patients named as the COVID village has been completed and handed over to IGMH.

The facility was built in Hulhumale’. The ceremony to hand over the facility to IGMH was attended by Defense Minister Mariya Ahmed Didi. MNDF forces were one of the main state institutions behind the facility.

Situated in front of the Tree Top Hospital, the facility was built by MNDF as well as other state institutions.

Minister Mariya, speaking at the ceremony stated that the facility felt like a huge accomplishment to her and the work for the facility was conducted under the direct orders of the President.

Challenges were posed in completing the work, most notably the virus cases confirmed from the MNDF officers working on the site, which caused delays and strain in the project, noted the Minister.

She also thanked everyone who worked on the facility and risked their lives by doing so.

The work on the COVID village was commenced on April 1. The project was overseen by the Defense Force and was partaken by Fenaka Corporation, Planning Ministry, Leo Construction, Rasheed Carpentry as well as a number of other private companies. MNDF also noted the assistance provided by the President’s Office, National Disaster Management Authority, HDC, STELCO, MWSC, and WAMCO.

MNDF military engineers, electrical and mechanical engineers as well as SIGNALS teams took part in the work to complete the facility in 45 days.

The facility will be distributed into five blocks. Block A which has four floors was developed to house 222 beds. Block B which has just one floor will have 68 beds. Block C is designated as a healthcare worker's accommodation facility. Block D was developed as a service building that will hold laundry rooms, offices, and meeting rooms. Block E has a cleansing facility and an autoclave machine.

Around 350 MNDF officers were involved in the work almost non-stop. MNDF stated that 76 officers worked inside the facility after being quarantined due to a positive case of the virus.