China boosts spending but no big steps for virus-hit economy 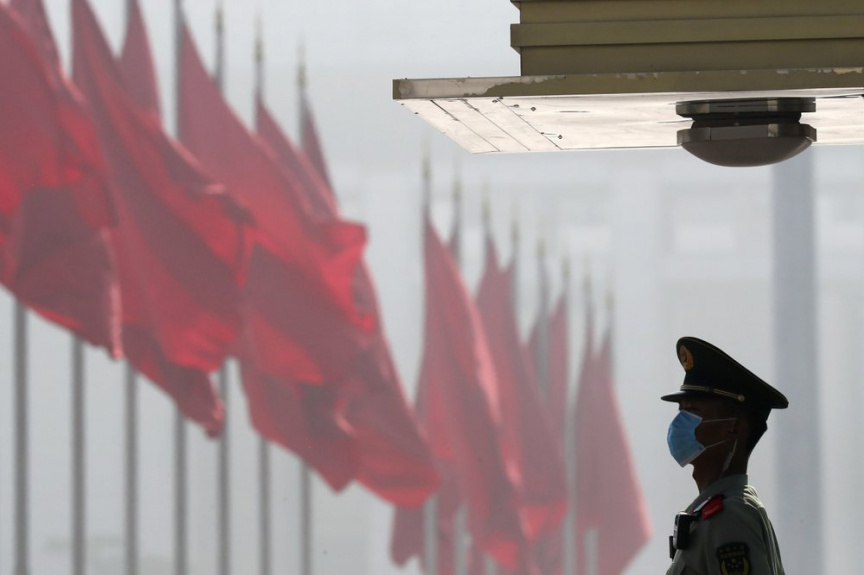 A Chinese paramilitary policeman stands guard near Tiananmen Square before the opening session of China's National People's Congress (NPC) at the Great Hall of the People in Beijing, Friday, May 22, 2020. (AP Photo/Ng Han Guan, Pool)

BEIJING (AP) — China’s top economic official on Friday promised higher spending to revive its pandemic-stricken economy and curb surging job losses but steered clear of launching a massive stimulus on the scale of the United States or Japan.

Premier Li Keqiang, in a speech to legislators, said Beijing would set no economic growth target, usually a closely watched feature of government plans, in order to focus on fighting the outbreak.

The battle against the virus “has not yet come to an end,” Li warned. He urged the country to “redouble our efforts” to revive the struggling economy.

The coronavirus pandemic began in central China in December and prompted the government to isolate cities with 60 million people, adding to strains for the ruling Communist Party that include anti-government protests in Hong Kong and a tariff war with Washington.

China has reported 83,000 virus cases and 4,634 deaths and was the first economy to shut down factories, shops and travel to fight the virus. It became the first to reopen in March but is struggling to revive activity.

Private sector analysts say as many as 30% of the country’s 442 urban workers — or as many as 130 million people — lost jobs at least temporarily. They say as many as 25 million jobs might be lost for good this year.

The government’s budget deficit will swell by 1 trillion yuan ($140 billion) this year to help meet targets including creating 9 million new urban jobs, Li said. That is in line with expectations for higher spending but a fraction of the $1 trillion-plus stimulus packages launched or discussed by the United States, Japan, and Europe.

“These are extraordinary measures for an unusual time,” the premier said in the nationally televised speech.

Li said Beijing set no growth target due to the “great uncertainty” of the epidemic and to enable officials to focus on other goals.

The world’s second-largest economy contracted by 6.8% over a year earlier in the three months ending in March after factories, offices, travel and other businesses were shut down to fight the virus. Forecasters expect little to no growth this year, down from 2019’s 6.1%, already a multi-decade low.

The big deficit “indicates significant policy support for the domestic recovery,” Louis Kuijs of Oxford Economics said in a report.

However, Beijing is reluctant to launch a stimulus that would add to already high Chinese debt and strains on the financial system, Kuijs said.

Li also promised to work with Washington to carry out the truce signed in January in their fight over Beijing’s technology ambitions and trade surplus. The premier gave no details, but President Donald Trump has threatened to back out of the deal if China fails to buy more American exports.

Strains with Washington have been aggravated by Trump’s accusations that Beijing is to blame for the virus’s global spread.

Also Friday, the government announced the military budget, the world’s second-biggest after the United States, will rise 6.6% to 1.3 trillion yuan ($178 billion). The military budget excludes some large items including acquisitions of major weapons systems.

This year’s annual session of the ceremonial National People’s Congress is being held under intensive anti-disease controls. Officials are holding news conferences by video instead of meeting reporters face to face. Reporters are required to undergo laboratory tests for the virus before being allowed into the press center.

Also this year, legislators are due to take up long-stalled efforts to impose a national security law on Hong Kong. The measure, a sign of Beijing’s determination to tighten control over the territory, has prompted complaints by opposition figures there and a threat by the Trump administration to withdraw Hong Kong’s preferential trade status.

Li, the premier, gave no details. But Beijing has pushed for measures in Hong Kong such as punishment for showing disrespect for the Chinese flag and increasing patriotic-themed education in schools.

The decision appears to have been prompted by anti-government protests in Hong Kong that began in June over a proposed extradition law and have expanded to cover other grievances and demands for more democracy. A similar measure was withdrawn from Hong Kong’s legislature in 2003 following massive public protests.

Li called on government officials to make progress in an array of areas including employment, trade, attracting foreign investment, meeting the public’s basic living needs, and ensuring the stability of industrial supply chains.

Li warned that ensuring economic growth was “of crucial significance” even though Beijing set no official target. Pressure on employment has “risen significantly,” he said.

Automakers and other manufacturers say production has rebounded almost to normal levels, but consumer spending, the main engine of economic growth, is weak amid widespread worries about potential job losses.

Forecasters say China is likely to face a “W-shaped recovery” with a second downturn and millions of politically volatile job losses later in the year due to weak U.S. and European demand for Chinese exports.

Li said despite the focus on the virus, the ruling party also hopes to achieve longer-term goals this year including eliminating rural poverty. Among other things, the epidemic has disrupted work toward achieving the party’s promise to double economic output and incomes from 2010 levels by this year.

“We will give priority to stabilizing employment and ensuring people’s livelihood, resolutely win the battle to overcome poverty, and strive to achieve the goal of building a moderately prosperous society,” the premier said.