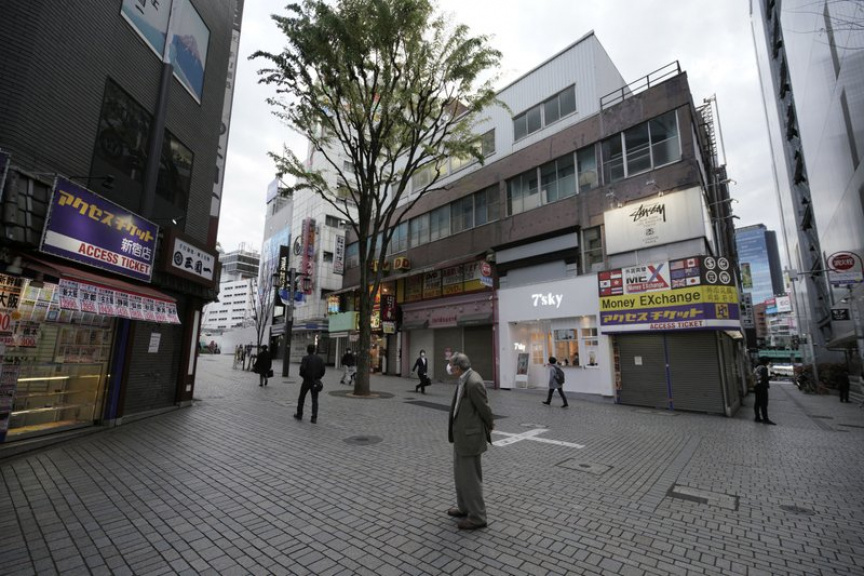 In this April 24, 2020, file photo, a man wearing a face mask to help stop the spread of the new coronavirus stands in a middle of a walking street in the Shinjuku ward in Tokyo. (AP Photo/Eugene Hoshiko, File)

TOKYO (AP) — Recession-hit Japan’s exports plunged nearly 22% in April, marking its worst drop in more than a decade, as the coronavirus pandemic slammed global demand for autos, machinery and chemicals.

Imports fell 7% from a year earlier, according to the Finance Ministry.

The drop in exports was the worst since October 2009 in the aftermath of the 2008 financial crisis, as export-dependent Japan struggles to juggle the health risks of COVID-19 with the dire need to keep the economy going.

Exports to regions most badly affected by the pandemic took the biggest hits.

Shipments to the U.S. plunged 38%, while imports rose 1.6%, causing the politically contentious trade surplus to decline by 75% from a year earlier, to 181 billion yen ($1.7 billion).

Japan’s exports to the European Union tumbled 28% in April, while imports from the region declined 8%.

Trade with China, which was the early epicenter of the coronavirus outbreaks and is now reviving its economy, was less affected. Exports slipped 4% and imports from China jumped 12% year-on-year.

By sector, exports of vehicles, machinery, chemicals and textiles fell most sharply.

Automakers, like Toyota Motor Corp. and Honda Motor Co., which form the pillar of the economy, have reported nose-diving profits as sales shrink around the world and plants in some parts of the world stop production.

Japan is in a technical recession after a contraction that began in the last quarter of last year deepened in January-March. Analysts say worse may lie ahead.

Like many other nations, Japan has asked people to work from home and do social distancing to curb the virus’ spread. Restrictions were eased this month in regions with few or no new infections, though they remain in place for Tokyo and some areas.

Tourism and travel have dwindled. Restaurants are closed or allowing only takeouts, and those that have stayed open are seeing fewer customers.

Even before, the world’s third-largest economy barely eked out growth over some periods. The recent trade conflict between China and the U.S. has also hurt Japan.

Dozens of US Marines in Japan’s Okinawa get coronavirus

Japan braces for more rain as death toll rises to 66