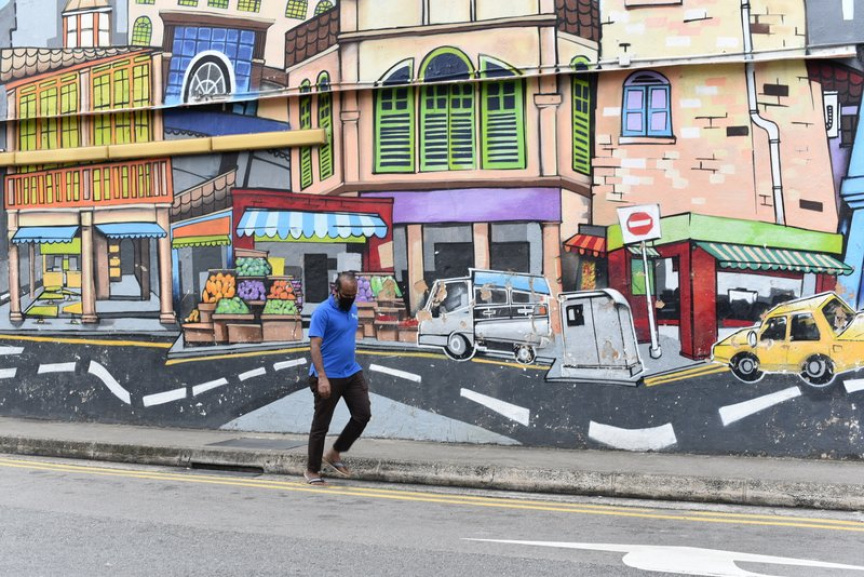 A man with a facemask walks past a wall mural in Singapore’s Little India district on Saturday, May 16, 2020. (AP Photo/YK Chan)

KUALA LUMPUR, Malaysia (AP) — Singapore sentenced a drug suspect to death at a court hearing held on the videoconferencing app Zoom because of the city-state’s coronavirus lockdown, in a decision slammed by a human rights group as callous and inhumane.

Defense lawyer Peter Fernando said the Supreme Court announced the penalty to his client, Punithan Genasan from Malaysia, in a virtual hearing Friday. Genasan was in jail, while Fernando and prosecutors participated in the hearing from different locations.

A Supreme Court spokesperson said courts have been conducting hearings and delivering judgments remotely to minimize the spread of the virus. The spokesperson, who declined to be identified under court policy, confirmed Genasan’s case was the first “where a death sentence was pronounced by remote hearing in Singapore.”

Singapore however, is not the first country to do so. Human Rights Watch said a man in Nigeria was also sentenced to death via Zoom earlier this month, reportedly for murder.

“This has been the arrangement made by the court ... with essential hearings conducted via Zoom. We have no complaints,” Fernando said Wednesday. He said he will meet Genasan on Friday to discuss an appeal.

The Singapore court ruled that Genasan, 37, was involved in drug trafficking in October 2011. Court documents said the judge found he recruited two drug couriers and directed them to transport and deliver 28.5 grams of heroin.

Singapore applies the death penalty to a range of offenses including drug trafficking, murder, kidnapping, waging war against the government and use of firearms. It has defended capital punishment as a deterrent for the most serious crimes. Most of the cases are drug-related.

The city-state imposed a partial lockdown in early April after it was hit by a second wave of virus infections sparked by foreign workers living in crowded dormitories. It has reported more than 29,000 virus cases, among the highest in Asia, but only 22 deaths. It plans to gradually lift restrictions next month.

Human Rights Watch said the death penalty is already cruel and inhumane, and the use of Zoom to announce it made it worse.

“It’s shocking the prosecutors and the court are so callous that they fail to see that a man facing capital punishment should have the right to be present in court to confront his accusers,” said the group’s deputy Asia director, Phil Robertson. He said it raised concerns about why Singapore is rushing to conclude the case via Zoom.

Amnesty International urged Singapore to abolish capital punishment, whether announced via Zoom or in person. Its death penalty adviser, Chiara Sangiorgio, said Singapore is only one of four countries that currently execute people for drug offenses.

“At a time when the global attention is focused on saving and protecting lives in a pandemic, the pursuit of the death penalty is all the more abhorrent,” Sangiorgio said.