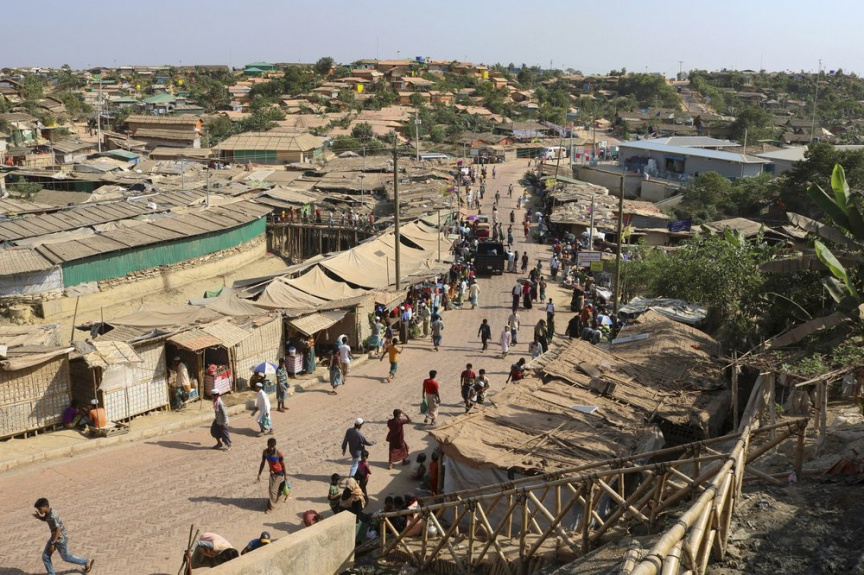 In this April 12, 2020, file photo, Rohingya refugees walk through one of the arterial roads at the Kutupalong refugee camp in Cox's Bazar, Bangladesh. Authorities on Thursday, May 14, 2020 reported the first coronavirus case in the crowded camps for Rohingya refugees in southern Bangladesh, where more than 1 million refugees have been sheltered, a Bangladeshi official and the United Nations said. (AP Photo/Shafiqur Rahman, File)

DHAKA, Bangladesh (AP) — Authorities have reported the first coronavirus case in the crowded camps for Rohingya refugees in southern Bangladesh, where more than 1 million refugees are sheltered.

The person from the Rohingya community and a local person who lives in the Cox’s Bazar district who also tested positive have been isolated, Mahbub Alam Talukder, the country’s refugee commissioner, said Thursday.

Teams have been activated for treatment of the patients as well as tracing people they may have encountered and quarantining and testing of those contacts, Louise Donovan, a spokeswoman for the U.N. refugee agency, told The Associated Press.

Aid workers have been warning of the potential for a serious outbreak if the virus reached the camps. With about 40,000 people per square kilometer (103,600 per square mile) living in plastic shacks side by side, which is more than 40 times the average density of Bangladesh, the refugees would be dangerously exposed to the virus.

Each shack is barely 10 square meters (107 square feet) and many are overcrowded with up to 12 people.

Most of the Rohingya have fled Myanmar since August 2017, when Myanmar’s military launched counterinsurgency operations in response to rebel attacks. Security forces have been accused of mass rapes, killings and burning thousands of homes.