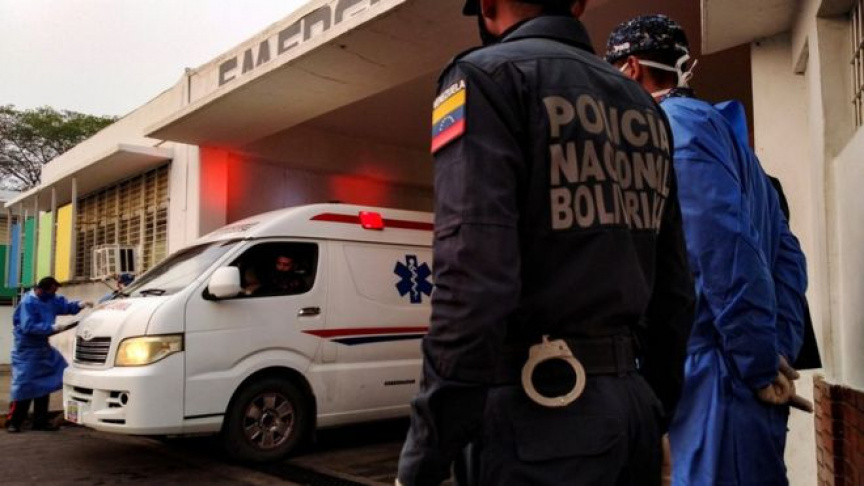 An ambulance arrives with prisoners outside a hospital after a riot erupted inside a prison in the Venezuelan state of Portuguesa. (Photo/Reuters)

CARACAS, Venezuela (AP) — A riot erupted at a prison in central Venezuela on Friday, killing at least 40 people and injuring 50 more, including a National Guard officer who was wounded by an explosion and the warden, who suffered a knife wound, authorities said.

The upheaval at the Llanos Penitentiary Center started with an inmate protest demanding that their relatives be allowed to deliver them food and then an armed confrontation broke out between inmates and guards, lawmaker María Beatriz Martínez told The Associated Press.

The National Guard officer was injured by a grenade explosion, said Martínez, who had access to an early report prepared by the town’s security forces. The prison is located in the city of Guanare, 450 kilometers (280 miles) south-west of the capital of Caracas.

The warden was injured by at least one inmate wielding a knife, Varela said.

A once-wealthy oil nation, Venezuela is gripped by a deepening political and economic crisis. Street violence is common in the nation that has had nearly 5 million residents flee in recent years as public services crumble.

Venezuela has roughly 30 prisons and 500 jails that can hold an estimated 110,000 inmates. Human rights officials say the prisons are violent and badly overcrowded, with gangs that traffic weapons and drugs in control.

According to the human rights group Venezuelan Prison Observatory, the Guanare prison was built to hold 750 inmates but is jammed beyond capacity with 2,500 inmates.

A similar riot occurred a year ago in a nearby jail also in the state of Portuguese, where 29 inmates died at a police jail that housed several hundred detainees. Violence broke out when armed inmates objected to officers entering the jail.