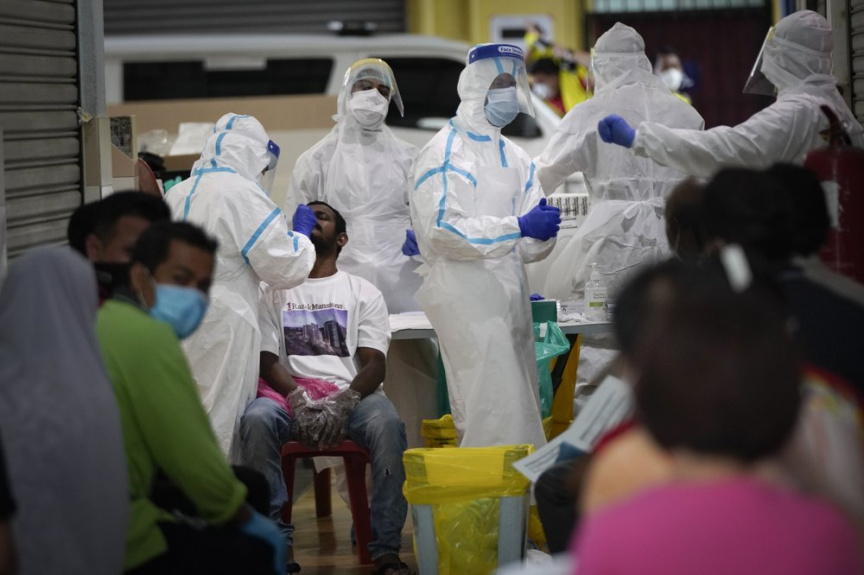 A health worker collects sample for coronavirus testing from a worker at a locked down wet market as one of its traders tested positive for COVID-19 in Petaling Jaya, Malaysia, Tuesday, April 28, 2020. (AP Photo/Vincent Thian)

KUALA LUMPUR, Malaysia (AP) — Malaysian lawyers and an international rights group have voiced concern over what they say is excessive sentencing of violators of the country’s coronavirus lockdown.

Malaysia, which has confirmed 5,851 cases and 100 deaths from COVID-19, has arrested more than 21,000 people since a partial lockdown began March 8. Violators face a fine or a jail term of up to six months.

It’s not clear how many people have been imprisoned, but a number have been handed jail sentences ranging from a few days to several months.

The Bar Council, which represents some 15,000 lawyers, urged courts to temper justice with compassion because the offenses don’t involve violent crime. Bar president Salim Bashir said in a statement that incarcerating violators raises the risk of virus transmissions in courts and already crowded prisons.

While flouting the lockdown must not be taken lightly, Bashir said, “Sending violators to jail is a cure that is worse than the disease.”

The Bar Council also said it was disturbed over cases of disparity in sentencing between ordinary people and those with influence. Malaysia’s deputy health minister on Tuesday was let off with a 1,000 ringgit ($229) fine for having a lunch gathering at a religious school.

In contrast, a university student was sentenced to seven days in jail and a 1,000 ringgit fine for leaving her house to take a cake to her boyfriend. She faces an additional two months in jail if she fails to pay the fine.

Human Rights Watch said Malaysia should stop jailing violators because it’s counterproductive to reducing the virus spread. It also said the temporary detention facilities being used for lockdown violators should instead be used to reduce overcrowding in Malaysia’s existing prisons.

— HOLIDAY WORRIES IN SOUTH KOREA: South Korean officials have issued public pleas for vigilance to maintain hard-won gains against the coronavirus as the nation enters its longest holiday since infections surged in February. Vice Health Minister Kim Gang-lip said Wednesday that 180,000 people are expected to visit the resort island of Jeju during a six-day break from Thursday to Tuesday, despite the island government pleading travelers not to come. Kim urged travelers to wear masks, not to share food and stay at home if they have fever or respiratory symptoms. South Korea’ has confirmed 10,761 cases, including 246 deaths.

— TOKYO SITUATION STILL SERIOUS: Tokyo Gov. Yuriko Koike on Wednesday called for an extension of Japan’s nationwide “state of emergency,” which requests people to stay home and social distance. She noted that reported daily cases of COVID-19 in Tokyo have topped 100 people recently. The state of emergency lasts through May 6, which marks the end of the Golden Week holidays that began this week. The government has asked people not to travel during the holidays. There is no lockdown in Japan, and some businesses and restaurants remain open.

— CHINA CONGRESS SET: China has decided to hold the annual meeting of its ceremonial parliament late next month after postponing it for weeks because of the coronavirus outbreak. The official Xinhua News Agency said Wednesday that the National People’s Congress would open in Beijing on May 22, according to a decision made by its standing committee, which handles most legislative affairs outside the annual two-week session of the full body. The convening of the full session, which would encompass about 3,000 members, indicates China’s growing confidence that it has largely overcame the pandemic that was first detected in the country late last year.

— AUSTRALIAN MINING MAGNATE URGES INQUIRY DELAY: An Australian mining magnate and partner in the government’s pandemic response says a global inquiry into the coronavirus should be delayed until after the U.S. presidential election. Andrew Forrest, who became a billionaire exporting iron ore to China as founder of Fortescue Metals Group, said such an inquiry made “common sense,” but should be held after the November election so “there’s not going to be a political dog in this fight.” Australia’s calls for an independent inquiry are damaging bilateral relations with China, which accused Australia of parroting the United States.