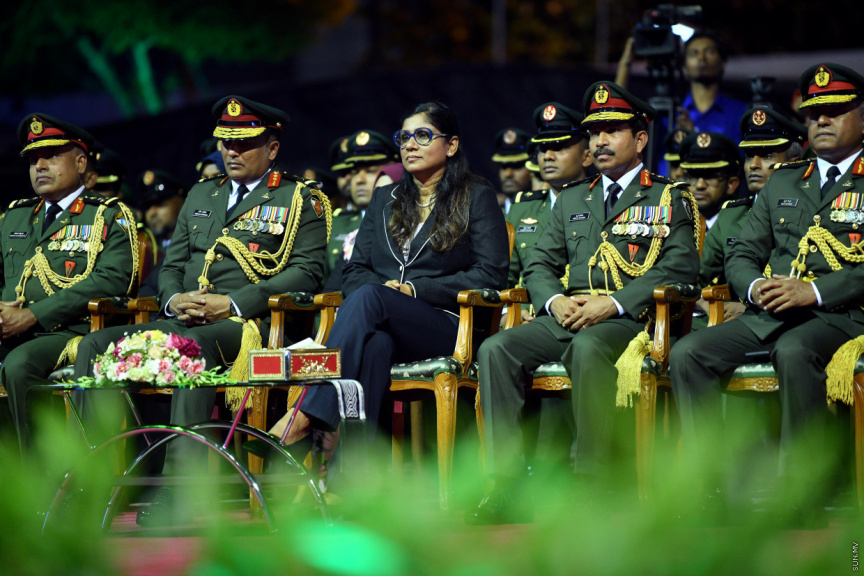 Defense Minister Mariya Ahmed Didi at a ceremony of MNDF. Minister Mariya stated that MNDF was ready and capable of facing any situation on November 3, 2019. (Sun Photo/Fayaz Moosa)

The Defense Minister of Maldives Mariya Ahmed Didi has described the ambitious efforts by the Maldives National Defense Force (MNDF) in the country’s attempts to control the Covid-19 virus as a situation equivalent to a war.

The minister was speaking in an interview with state media when she made the remarks. She highlighted the extremely important work conducted by the National Emergency Operations Center which operates under the Defense Ministry and is leading the fight against the virus.

“In the words of soldiers, our main and most exhausting work is focused on the war against the virus that is Covid-19. That is what we are doing day and night.” Said the minister.

She noted that every department of the armed forces was mobilized for the situation and stated that the army would be working in close proximity with patients of the virus for which the unmeasurable love of the citizens was directed towards them.

The minister said that the messages recognizing the sacrifices of the armed forces and their families currently numbered too high when compared with the commemorative messages of the anniversary of MNDF.

“A lot of measures are being taken for the safety of the soldiers in here, however, we are fighting against a virus that is invisible to the naked eye.” Said the minister.

She also hailed the accomplishments of the armed forces in accordance with the motto designated for this year, which is loosely translated as “the courage of the armed forces – the safety and security of the nation” and noted that this was something to be rejoiced about.