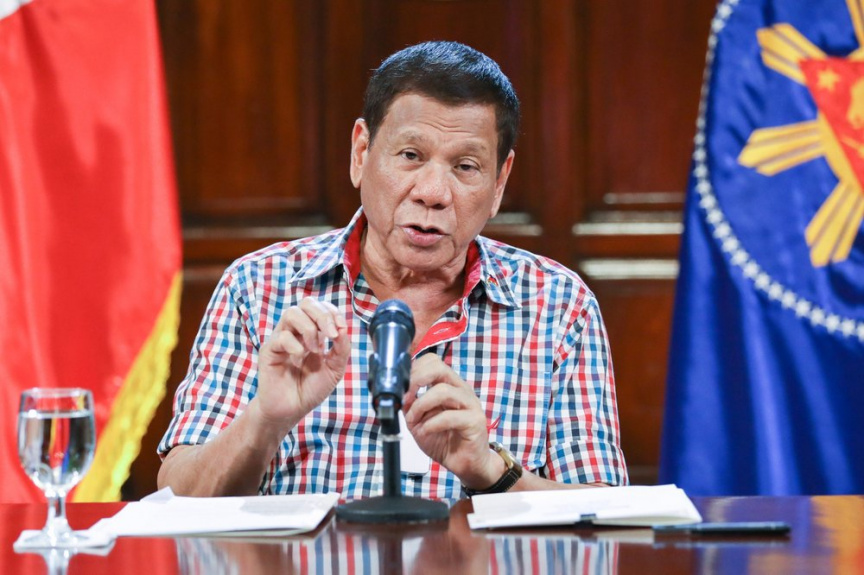 In this April 16, 2020, photo provided by the Malacanang Presidential Photographers Division, Philippine President Rodrigo Duterte speaks to the nation about the government's efforts to prevent the spread of the coronavirus that causes the COVID-19 disease during a televised address from Malacanang palace in Manila, Philippines. President Duterte threatened martial law-style enforcement of a monthlong lockdown in the main northern region of of the country as violations of the quarantine soared. (Karl Norman Alonzo/ Malacanang Presidential Photographers Division via AP)

BANGKOK (AP) — Philippine President Rodrigo Duterte threatened martial law-style enforcement of a monthlong lockdown in the main northern region of the country as violations of the quarantine soared.

Duterte said in a late-night televised speech Thursday he would order the military and police to strictly enforce social distancing and curfews if compliance would not improve. Police said they have accosted about 120,000 quarantine violators since last month, including people who engaged in cockfighting and drinking sprees.

“The police and military will enforce social distancing and curfews. They will. It’s like martial law. You choose. I don’t like it,” Duterte said but added that he may be forced to “if the country gets compromised and you won’t show discipline.”

Duterte, who took office in mid-2016, already had drawn concern about potential human rights violations for his bloody anti-drugs crackdown in which thousands of mostly poor drug suspects have been killed.

Some irate local officials have taken enforcement of his coronavirus lockdown to extremes, including a village guard who locked five drunken curfew violators in a dog cage and others who paraded violators to shame them in public or made them sit under the scorching sun for hours.

The Philippines has reported 5,660 infections, the most in Southeast Asia, including 362 deaths from COVID-19.