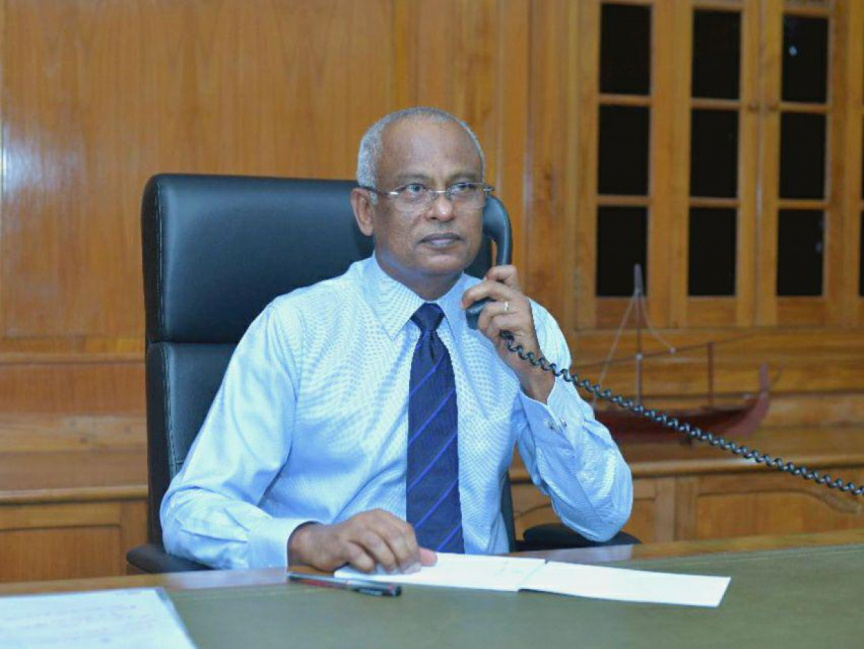 President Ibrahim Mohamed Solih discussed the ongoing situation regarding the spread of the global pandemic, Covid-19, over the telephone with the United Nations Secretary-General, Antonio Guterres on April 16, 2020. (Photo/President's Office)

President Ibrahim Mohamed Solih discussed the situation in the Maldives regarding the spread of the Covid-19 global pandemic with the United Nations Secretary-General, Antonio Guterres, tonight.

The President in the phone call commended the Secretary-General for his leadership during this ongoing global crisis and provided an outline of the measures the Maldives has implemented at the national level to contain the virus.

The President also discussed areas in which the UN could be of assistance to the Maldives as well as Small Island Developing States (SIDS), before moving on to the challenges faced during the situation with the virus.

The President briefed the Secretary-General on the early interventions taken by the government in response to the first positive case on March 7.

The country declared a State of Public Health Emergency on March 12 and through strict border control, screening and quarantine measures, successfully prevented community spread for over a month.

Welcoming the UN’s recent establishment of the ‘Response and Recovery Fund’ to aid low and middle-income economies that have been heavily impacted by the virus’ spread, the President requested the UN’s assistance to the Maldives.

He also highlighted that countries such as the Maldives are predominantly dependent on international tourism and trade, and are disproportionately impacted by the measures that have to be imposed to effectively contain Covid-19. The President welcomed the Secretary-General’s initiatives to restructure debt repayment windows and to forgive debts, for countries with vulnerable economies.

President Solih thanked the Secretary-General for taking the time to discuss the ongoing pandemic and reiterated his gratitude and support for the work of the United Nations in the fight against COVID-19.