Assange’s partner reveals they had 2 children and urges bail 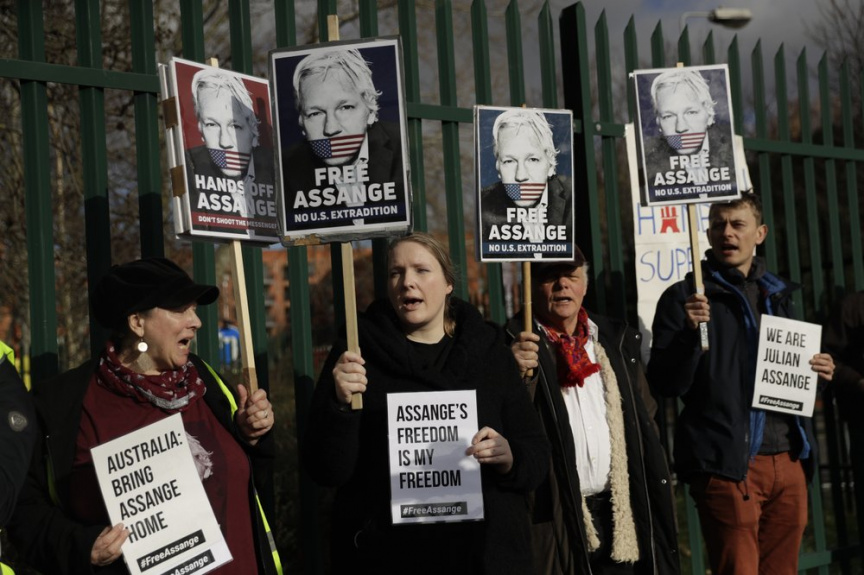 Supporters of Julian Assange hold placards as they protest on the second day of a week of opening arguments for the extradition of Wikileaks founder Julian Assange outside Belmarsh Magistrates' Court in south east London, Tuesday, Feb. 25, 2020. (AP Photo/Matt Dunham)

LONDON (AP) — Julian Assange’s partner revealed Sunday that she had two children with him while he lived inside the Ecuadorian Embassy in London and she issued a plea for the WikiLeaks founder to be released from prison over fears for his health during the coronavirus pandemic.

Assange has been imprisoned at London’s Belmarsh prison since police dragged out of the embassy a year ago. He is awaiting a May 18 hearing on his extradition to the United States, where he faces espionage charges over the activities of WikiLeaks.

In a video uploaded onto YouTube, Stella Moris said she met Assange in 2011 when she helped out his legal team and that they got together four years later. Moris says their children are 3-year-old Gabriel and 1-year-old Max.

Moris said in a statement last month in support of Assange’s bail application that she had gone “to great lengths to shelter our children from the climate that surrounds him.” Assange respected her wish for privacy, she wrote in the statement dated March 24 and seen by The Associated Press.

“My close relationship with Julian has been the opposite of how he is viewed, of reserve, respect for each other and attempts to shield each other from some of the nightmares that have surrounded our lives together,” she said.

Moris said she decided to make the statement a day after the British government put the country under lockdown, because “our lives are on the brink and I fear that Julian could die.” She worried about the coronavirus taking root in the prison and Assange’s “increased risk of exposure.”

Jennifer Robinson, counsel to Assange and Wikileaks and a barrister at Doughty Street Chambers, said Moris had “not taken this decision lightly, having fiercely protected her family’s privacy for many years.”

“She wanted to speak in support of Julian’s bail application given the grave risk to his health in prison during the COVID pandemic and the judge refused her anonymity.”

The extradition hearing is fixed for May 18 after a judge at Westminster Magistrates’ Court rejected calls for an adjournment until September over what Assange’s legal team said were “insuperable” difficulties preparing his case because of the virus pandemic.

''Assange was offered US pardon if he cleared Russia''

Embassy to prison: Assange settles in for legal battle