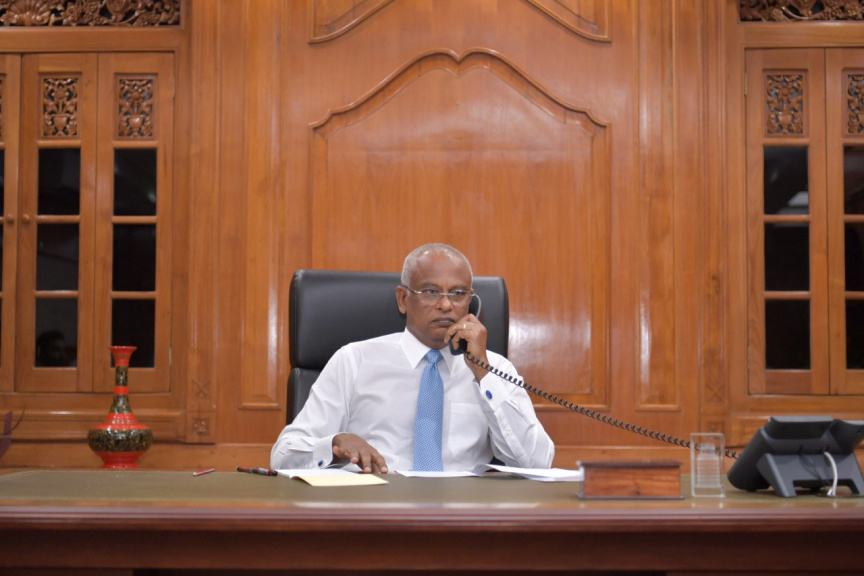 President Ibrahim Mohamed Solih has held discussions with the Director General of the World Health Organization (WHO), Dr. Tedros Adhanom regarding the ongoing COVID-19 pandemic.

The discussions held over phone sawthe President express appreciation for the WHO’s efforts to raise awareness on protecting communities from the spread of virus, and its ongoing efforts to preparing resources against the virus. President Solih aloso expressed his gratitude to the WHO country team in the Maldives.

The President stated that there has been no community spread in the Maldives as he gave a brief overview of the situation in the country.

He noted the early steps and interventions taken to to stop the virus, such as declaring a state of public health emergency and enacting measures to prevent public gatherings as well as imposing travel restrictions on high risk countries.

Measures such as prohibiting travel between resorts and inhabited islands, restricting on arrival visas, and the requirement for all Maldivians returning from abroad to be quarantined for a two week period were also noted by the President.

The President emphasised that the country was prepared for a worst-case scenario where a spike in number of cases are identified. President Solih noted that the preparations were begun in January and involve increasing the number of patient beds and intensive care facilities available as well as the development of test services throughout the country.

The President also noted that the precautionary measures put in place across the globe have created challenges in sourcing and procuring essential items. President Solih requested the WHO’s assistance in such matters before thanking the Director-General for the WHO’s contribution of test kits to the Maldives.