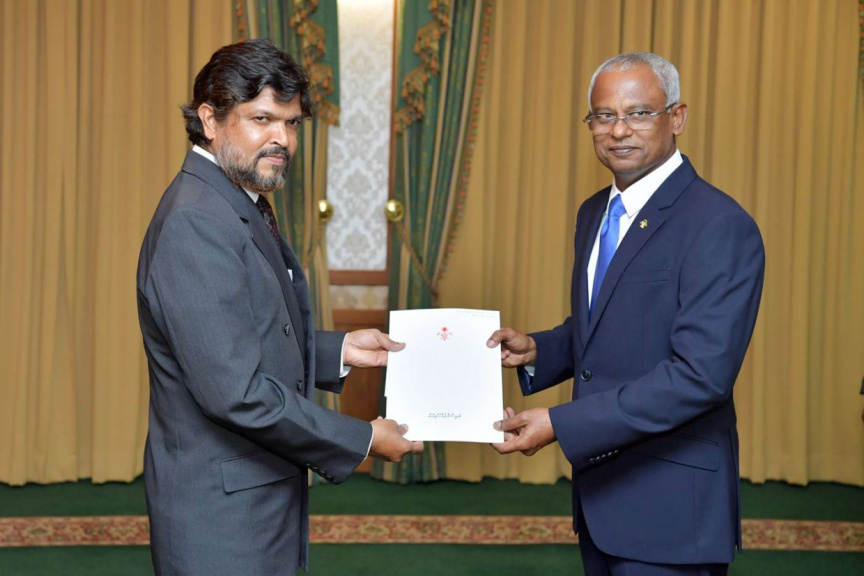 Ahmed Numan (L) is presented with his letter of appointment as the Commissioner General of Customs by President Ibrahim Mohamed Solih (R) on December 11, 2018. (File Photo/President's Office)

President Ibrahim Mohamed Solih has conveyed condolences to the family of the late Commissioner General of Customs Ahmed Numan.

The president in a tweet conveyed sincere condolences for the passing away of Commissioner Numan and stated that he heard the news with deep sadness. The President also sent out a prayer to guide the late-Commissioner to heaven, and patience to their families.

Numan had passed away at a hospital in Bangalore, India, on Tuesday after battling an illness. Maldives Customs has announced its flags will fly at half-mast for the next three days. Numan was appointed the Commissioner General of Customs on December 11, 2018.

He was also a key member of the political party, Adhaalath Party (AP), and was serving as a member of the AP’s Advisory Committee and as the chair of AP’s Human Rights Committee.

Numan had also served as Chairman of Fenaka Corporation, and in senior positions within STELCO and Housing Ministry.