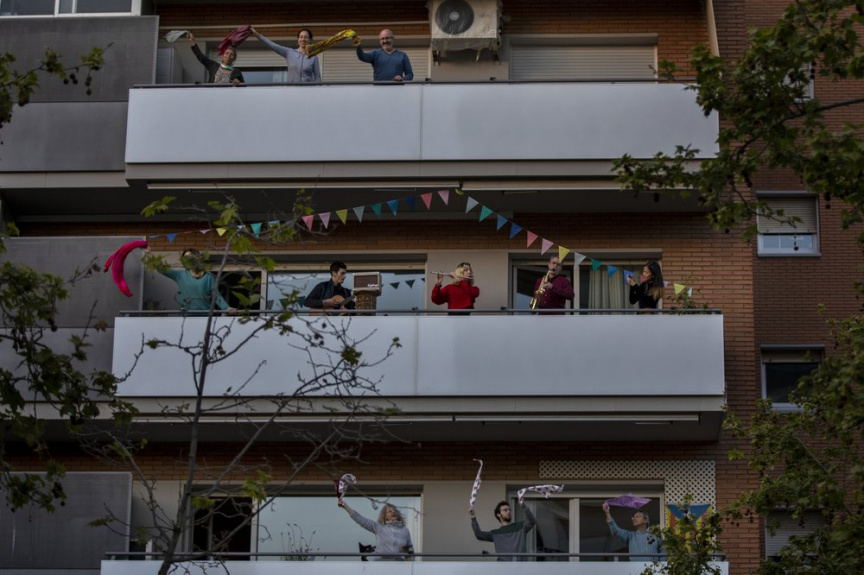 People play instruments as other dance on their balconies in support of the medical staff that are working on the COVID-19 virus outbreak in Barcelona, Spain, Sunday, April 5, 2020. (AP Photo/Emilio Morenatti)

MADRID (AP) — A week ago, emergency rooms and intensive care wards in Spain and Italy were overflowing with woozy, coughing coronavirus patients and literally buzzing with breathing machines.

So many died that Barcelona crematories have a waiting list of up to two years, forcing some people to bury loved ones temporarily in cemeteries with the expectation of exhuming them for cremation later on.

But now the two countries that have suffered more virus deaths than anywhere else in Europe are starting to see their crisis ease, while Britain, where the prime minister was hospitalized in intensive care Monday, seems headed in the opposite direction.

Between them, Italy and Spain saw nearly 30,000 deaths and 265,000 confirmed infections in the pandemic. They, and other European countries that locked down weeks ago and ramped up testing, are now seeing the benefits.

Prime Minister Giuseppe Conte promised Italians Monday that they will soon ’’reap the fruit of these sacrifices” in personal liberties made to fight the coronavirus.

Conte declined during a press conference to say when the nationwide lockdown, now in its fifth week, would be lifted. The current measures expire April 13, but how and when Italy will enter a next phase of ’’co-existing” with the virus will depend on a technical panel of experts. The country’s business lobby is also eager to restart production, which also has been significantly blocked by the lockdown.

Britain’s outbreak was headed in the opposite direction as the country reported more than 600 deaths Sunday, surpassing Italy’s daily increase for the second day in a row.

“I think that we are just a week away from the surge of this,” the deputy chief executive of Britain’s NHS Providers, Saffron Cordery, told Sky News.

In Spain, deaths and new infections dropped again on Monday. The health ministry reported 637 new fatalities, the lowest toll in 13 days, for a total of over 13,000 dead. New recorded infections were the lowest in two weeks.

Emergency rooms in the hard-hit Madrid region of 6.6 million were returning almost to normal a week after scenes of patients sleeping on floors and in chairs.

Patients awaiting treatment in Madrid-area ERs went down Monday to 390 cases, one-tenth of the arrivals last week, the regional government said. The number of people being treated for coronavirus in intensive care stabilized at about 1,500 for five straight days.

“This new phase does not mean we can let down our guard. We are assessing the measures that we will need to adopt,” Ábalos said.

At the San Carlos Clinic Hospital in Madrid, nearly 15% of the hospital’s 1,400-strong staff contracted the coronavirus, in line with the national average,

“Our priority at the moment is to bring health workers back to work,” said Dr. Julio Mayol, the facility’s medical director.

Still, there are fears for a new outbreak as Spanish authorities begin talking about loosening the grip on mandatory confinement, and the strain on hospitalizations will still be seen for another week while that in intensive care units for another two weeks, Mayol said.

Italy still has, by far, the world’s highest coronavirus death toll — almost 16,000 — but the pressure on northern Italy’s ICUs has eased so much that Lombardy is no longer airlifting patients to other regions.

In the northern city of Bergamo, one of Europe’s virus epicenters, hospital staff were still pulling long, difficult shifts even if the numbers of new patients had eased a bit.

“There has been no reduction in the work,” said Maria Berardelli, a nursing coordinator at Pope John XXIII hospital. “There have been fewer admissions to the emergency room, but our intensive care units are still full, so the activity hasn’t been reduced.”

Illness has been compounded by shocking economic pain as all the world’s largest economies have ground to a halt, including in Italy and Spain. In France, which slightly trails its two neighbors to the south in deaths and infections, the government shut the country down two days after Italy — and has also seen a slight easing.

The U.K. initially resisted taking some of the tough measures seen in other European countries, which banned large events, shut schools and closed their borders to slow the spread of the COVID-19 illness.

The government’s first advice was that people should wash their hands frequently. As the number of cases soared, the response escalated to include the closure of schools, bars, restaurants and non-essential shops and a nationwide order for everyone but key workers to stay home.

Now, Austria and the Czech Republic are openly discussing how to ease some of the crippling restrictions. Austria’s chancellor said the plan is to let small shops and garden centers reopen next week, with limits on the number of customers inside, and the rest on May 1. The Czech government is proposing an end to the ban on travel abroad as of April 14 and the reopening of small stores.