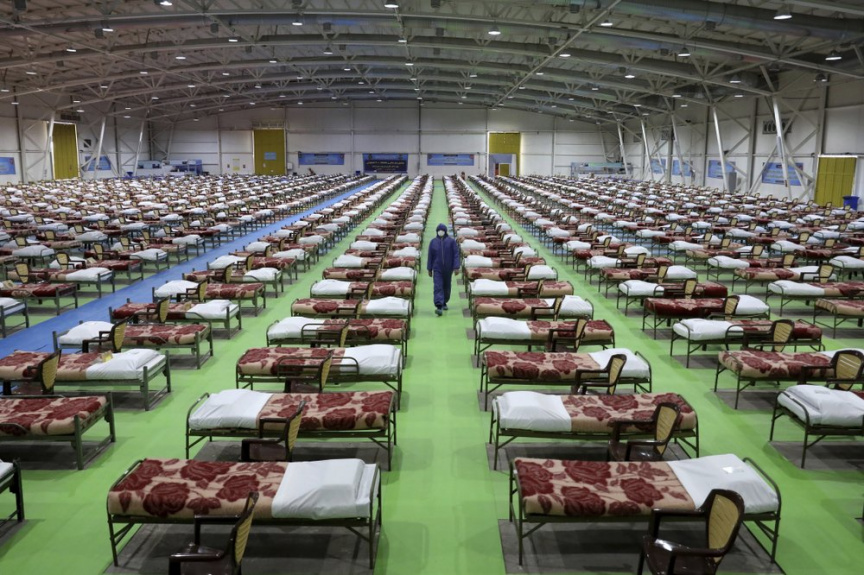 A member of the Iranian army walks past rows of beds at a temporary 2,000-bed hospital for COVID-19 coronavirus patients set up by the army at the international exhibition center in northern Tehran, Iran, on Thursday, March 26, 2020. (AP Photo/Ebrahim Noroozi)

TEHRAN, Iran (AP) — Iran’s president on Sunday lashed out at criticism of authorities’ lagging response to the worst coronavirus outbreak in the Middle East, saying the government has to weigh economic concerns as it takes measures to contain the pandemic.

Syria meanwhile reported the first fatality from the virus in the war-torn country, which has five confirmed infections. State news agency SANA said a woman died upon reaching an emergency room and tested positive for the virus, without saying where it happened.

Syria has closed schools, restaurants and nightclubs, and imposed a nighttime curfew last week aimed at preventing the virus’ spread. Its health care system has been battered by nearly a decade of civil war, leaving the country particularly vulnerable.

Libya, which has also been mired in chaos since 2011, reported another five cases, bringing its total to eight. The country is split by rival governments, each backed by an array of militias, that have been battling over the capital, Tripoli, for nearly a year.

Iran’s President Hassan Rouhani said authorities had to consider the effect of mass quarantine efforts on Iran’s beleaguered economy, which is under heavy U.S. sanctions. It’s a dilemma playing out across the globe, as leaders struggle to strike a balance between restricting human contact and keeping their economies from crashing.

“This is not the time to gather followers,” he added. “This is not a time for political war.”

Even before the pandemic, Rouhani was under fire for the unraveling of the 2015 nuclear deal he concluded with the United States and other world powers. President Donald Trump withdrew the U.S. from the agreement and has imposed crippling sanctions on Iran that prevent it from selling oil on international markets. Iran has rejected U.S. offers of humanitarian aid.

Most people suffer only minor symptoms, such as fever and coughing, and recover within a few weeks. But the virus can cause severe illness and death, especially in elderly patients or those with underlying health problems. It is highly contagious, and can be spread by those showing no symptoms.

In recent days, Iran has ordered the closure of nonessential businesses and banned travel between cities. But those measures came long after other countries in the region imposed more sweeping lockdowns. Many Iranians are still flouting orders to stay home in what could reflect widespread distrust of authorities.

Iran has urged the international community to lift sanctions and is seeking a $5 billion loan from the International Monetary Fund.

Elsewhere in the region, Qatar reported its first death from the new coronavirus late Saturday, saying the total number of reported cases there was at least 590.

The tiny, energy-rich nation said it flew 31 Bahrainis stranded in Iran into Doha on a state-run Qatar Airways flight. But since Bahrain is one of four Arab countries that have been boycotting Qatar in a political dispute since 2017, Doha said it could not fly the 31 onward to the island kingdom.

“Bahraini officials have said they will send a flight for them at some undefined point in the future,” the Qatari government said in a statement.

Bahrain said it planned a flight Sunday to pick up the stranded passengers. The kingdom said it had its own repatriation flights scheduled for those still stuck in Iran and warned Qatar that it “should stop interfering with these flights.”

In Egypt, at least 1,200 Sudanese are stranded at the border after Sudan closed all its crossings, according to Egyptian officials at one of the crossings. They spoke on condition of anonymity because they were not authorized to brief media.

Sudan, which is still reeling from the uprising that toppled President Omar al-Bashir last year, has six confirmed cases, including two fatalities. It’s one of several countries in the region where the health care system has been degraded by years of war and sanctions. Authorities closed the borders to prevent any further spread. The second death was announced as a positive coronavirus case earlier Sunday, more than two weeks after the person’s return from the United Arab Emirates.

Sudan’s Information Minister Faisal Saleh said Sudanese authorities are looking for lodging in Egypt for the stranded passengers. He said authorities have quarantined at least 160 undocumented migrants who were sent into Sudan from war-torn Libya earlier this month.

Residents in Egypt’s southern city of Luxor say they are providing shelter to the stranded Sudanese.

“We have provided food and medicine to the Sudanese brothers,” said Mahmoud Abdel-Rahim, a local farmer. “People hosted women, children and elders in their homes.”

Egypt, which has reported 609 cases and 40 fatalities, imposed restrictions on cash deposits and withdrawals to prevent crowding at banks as payrolls and pensions are disbursed. Authorities began imposing a nighttime curfew last week.