Trump: No quarantine, but travel advisory for NY, CT and NJ 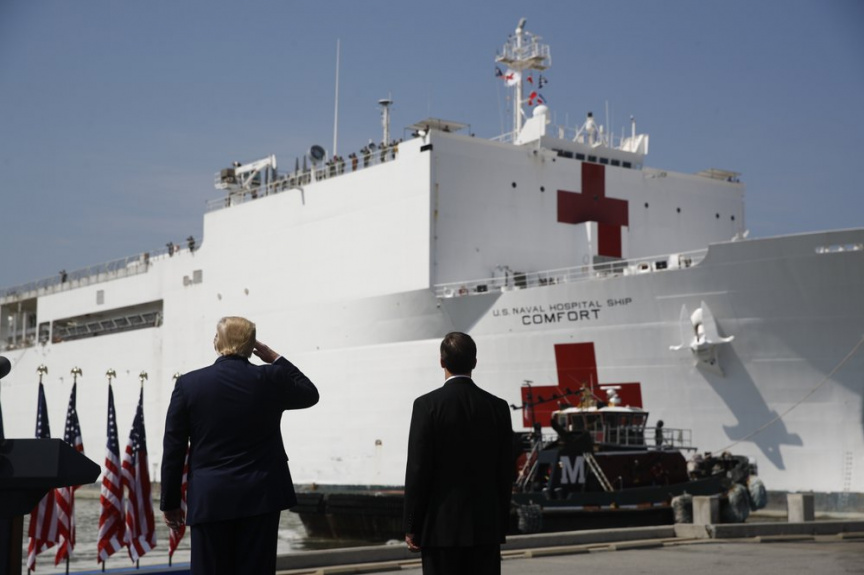 NORFOLK, Va. (AP) — President Donald Trump backed away from calling for a quarantine for coronavirus hotspots in New York, New Jersey and Connecticut, instead directing Saturday night that a “strong Travel Advisory” be issued to stem the spread of the outbreak.

Vice President Mike Pence tweeted that the CDC was urging residents of the three states “to refrain from non-essential travel for the next 14 days.”

The notion of a quarantine had been advocated by governors, including Republican Gov. Ron DeSantis of Florida, who sought to halt travelers from the heavily affected areas to their states. But it drew swift criticism from the leaders of the states in question, who warned it would spark panic in a populace already suffering under the virus.

Trump announced he reached the decision after consulting with the White House task force leading the federal response and the governors of the three states. He said he had directed the Centers for Disease Control and Prevention “to issue a strong Travel Advisory, to be administered by the Governors, in consultation with the Federal Government.”

He added: “A quarantine will not be necessary.”

New York Gov. Andrew Cuomo, who has criticized the federal government’s response as his state became the country’s virus epicenter, said roping off states would amount to “a federal declaration of war.” Cuomo said the prospect of a quarantine didn’t come up when he spoke with Trump earlier Saturday, adding that he believed it would be illegal, economically catastrophic, “preposterous” and shortsighted when other parts of the U.S. are seeing cases rise, too.

“If you start walling off areas all across the country, it would be totally bizarre, counterproductive, anti-American, anti-social,” Cuomo told CNN. He added that locking down the nation’s financial capital would shock the stock market and “paralyze the economy” at a time when Trump has indicated he’s itching to get the economy back on track.

Trump made his initial remarks while on a trip to Norfolk, Virginia, to see off a U.S. Navy hospital ship heading to New York City to help with the pandemic. At the event, he spoke to a sparse crowd at the naval base and cautioned Americans to take virus protections, even though he himself, at 73, is in a high-risk category and among those who have been advised to refrain from all non-essential travel.

The federal government is empowered to take measures to prevent the spread of communicable diseases between states, but it’s not clear that means Trump can ban people from leaving their state. It has never been tested in the modern era — and in rare cases when any quarantine was challenged, the courts generally sided with public health officials.

Courts have ruled consistently for years that the authority to order quarantines inside states rests almost entirely with the states, under provisions in the Constitution ceding power not explicitly delegated to the federal government to states. The federal government, though, would have power under constitutional clauses regulating commerce to quarantine international travelers or those traveling state to state who might be carriers of deadly diseases.

Still, “it is entirely unprecedented that governors or the president would prevent people from traveling from one state to another during an infectious disease outbreak,” said Lawrence Gostin, a Georgetown University law professor and public health specialist who questioned Trump’s ability to order a quarantine on states.

But as Trump traveled to Norfolk, he tweeted: “I am giving consideration to a QUARANTINE of developing “hot spots”, New York, New Jersey, and Connecticut. A decision will be made, one way or another, shortly.”

“A lot of the states that are infected but don’t have a big problem, they’ve asked me if I’ll look at it, so we’re going to look at it,” Trump said.

When asked about legal authority for quarantine, the incoming White House chief of staff, Mark Meadows, said officials are “evaluating all the options right now.”

Administration officials were discussing less-stringent measures as well. One idea under consideration would be to tell residents of the hard-hit areas to isolate themselves and not travel for two weeks, just as the Centers for Disease Control and Prevention has instructed anyone who recently left New York to self-quarantine for 14 days, according to one person familiar with the negotiations who spoke on condition of anonymity to discuss ongoing deliberations.

The measure wouldn’t necessarily come with any legal force or penalty, just the hope that people would comply in an effort to try to contain the virus spread.

The governors of Florida, Maryland, South Carolina and Texas already have ordered people arriving from the New York area to self-quarantine for at least 14 days upon arrival. In a more dramatic step, Rhode Island police have begun pulling over drivers with New York plates so that the National Guard can collect contact information and inform them of a mandatory, 14-day quarantine.

Trump said the idea of isolating many in the trio of Democratic strongholds in the Northeast was pushed by DeSantis, one of the president’s most outspoken supporters. It came a day after Trump made clear he wanted governors to be grateful when asking for federal support for the pandemic.

Florida is a perennial swing state, and one Trump must win come November — plus he recently moved his residence from New York to Florida. It also has a population of 21 million with a large percentage of old people, who are particularly vulnerable to the virus.

DeSantis confirmed he had spoken with the president about the possibility of a quarantine for the New York City area. Speaking Saturday to reporters, DeSantis said Florida will soon set up a checkpoint along Interstate 95 to screen travelers from that area, similar to one already in place along Interstate 10 to screen people from Louisiana. Many airports in Florida also are screening travelers from certain areas, requiring them to self-isolate for 14 days.

The U.S. leads the world in reported cases with more than 121,000. There were roughly 2,000 deaths recorded by Saturday night, according to John Hopkins University.

New Jersey Gov. Phil Murphy tweeted Saturday night that he’s been in communication with Trump and Pence and that their guidance “does not change the rules that have been established and in place for over a week now” in New Jersey. He said the frontline response effort, like health care and supermarket workers, are still needed. “I encourage all New Jerseyans to continue practicing aggressive social distancing and take personal responsibility to help us get through this public health emergency.”

Connecticut Gov. Ned Lamont, also a Democrat, said at a news conference that Trump’s words about a quarantine have created a “certain amount of confusion” and that “confusion can lead to panic.” He said such a quarantine order would be “impossible to enforce given the spider web of roads” and that he hoped the White House would clarify what it wants.

After speaking in Norfolk, Trump watched as the USS Comfort slowly made its way out of port. The 1,000-bed hospital ship had been undergoing planned maintenance, but was rushed back into service to aid the city.

It is scheduled to arrive Monday at a Manhattan pier days after its sister ship, the USNS Mercy, arrived in Los Angeles to perform a similar duty on the West Coast.

For most people, the new coronavirus causes mild or moderate symptoms, such as fever and cough that clear up in two to three weeks. For some, especially older adults and people with existing health problems, it can cause more severe illness, including pneumonia, or death. The vast majority of people recover.

US to reopen land borders in Nov. for fully vaccinated

US man executed for killing 3 workers in ’94 robbery