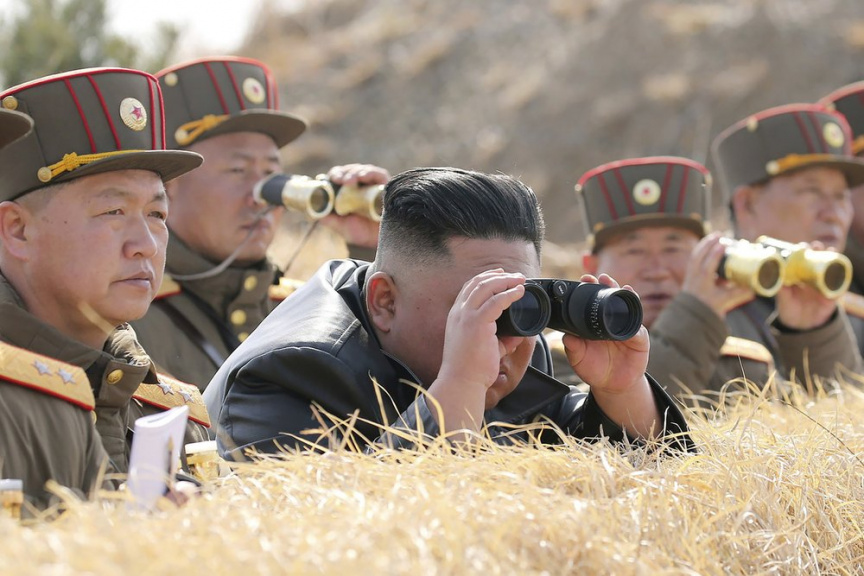 South Korea’s Joint Chiefs of Staff said the projectiles were fired around 6:45 and 6:50 a.m. from an area around the county of Sonchon, western North Korea. They flew 410 kilometers (255 miles) cross-country on an apogee of 50 kilometers (31 miles) before landing in waters off the eastern coast.

South Korea and the U.S. were analyzing the launches. Seoul’s military urged the North to immediately stop its “very inappropriate” military demonstrations when the world is struggling to cope with the coronavirus pandemic.

The North conducted two previous rounds of similar short-range launches and other military exercises this month after leader Kim Jong Un entered the new year vowing to bolster his nuclear deterrent in face of “gangster-like” U.S. sanctions and pressure.

While the North is clearly determined to advance its missile capabilities, Japan’s Defense Minister Taro Kono said Pyongyang’s demonstrations could also be aimed at “bracing the regime together” amid the coronavirus crisis.

It wasn’t immediately clear what North Korea tested. Flight data released by the South Korean and Japanese militaries suggest that the North could have tested one of its new mobile, solid-fuel missile systems it first demonstrated last year.

Military analysts say such weapons, which are designed to overwhelm missile defense systems with their maneuverability and low-altitude flights, potentially strengthen the North’s ability to strike targets in South Korea and Japan, including U.S. bases there.

North Korea in recent months has also demonstrated what it described as a “super large” multiple rocket launcher, which experts say was likely tested earlier this month.

The KCNA said Kim expressed satisfaction over the exercise that was aimed at evaluating combat readiness. The report didn’t mention any direct comments by Kim toward Washington or Seoul.

Pyongyang’s official Korean Central News Agency also said on Saturday that the North has decided to hold a session of its rubber-stamp parliament on April 10. It wasn’t immediately clear what would be discussed.

Nuclear talks have stalemated since the collapse of the second summit between Kim and President Donald Trump in early 2019, when the Americans rejected North Korean demands for major sanctions relief in exchange for a partial surrender of its nuclear capabilities.

Following the breakdown in talks, the North ended a 17-month pause in ballistic activity and conducted at least 13 rounds of weapons launches last year while pressuring Washington and Seoul for concessions. Those weapons also included a developmental mid-range missile that could be launched from submarines.

Some experts say the lull in North Korean launches between November and March could have been caused by the coronavirus pandemic, which started in mainland China in December.

Although Kim has vowed to build up his nuclear arsenal and achieve a “frontal breakthrough” against sanctions while urging his nation to stay resilient in a struggle for economic “self-reliance,” some experts say North Korea’s self-imposed lockdown amid the coronavirus crisis could potentially hamper his ability to mobilize people for labor.

North Korea has not publicly confirmed a single case of the COVID-19 illness, but state media have described anti-virus efforts as a matter of “national existence.” Experts say an epidemic in North Korea could have dire consequences due to the country’s poor health system and shortage of medical supplies.

The country has banned foreign tourists, shut down nearly all cross-border traffic with China, intensified screening at entry points and mobilized health workers to monitor residents and isolate those with symptoms.

Kickboxing match in Bangkok leads to spike in infection