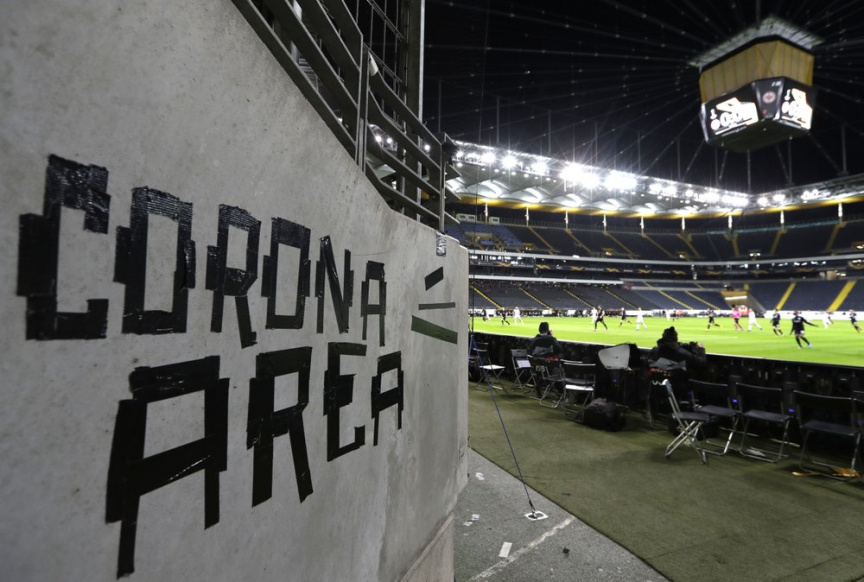 In this Thursday, March 12, 2020 file photo shows a sign taped by Eintracht fans on a wall of the stadium during a Europa League round of 16, 1st leg soccer match between Eintracht Frankfurt and FC Basel in Frankfurt, Germany. (AP Photo/Michael Probst)

GENEVA (AP) — The congested soccer calendar is being pushed beyond its limits by a global pandemic ahead of the 2022 World Cup.

The coronavirus outbreak is testing the wisdom of soccer’s global drive toward creating and expanding international competitions in the gaps between already busy domestic programs.

A slew of postponements this month knocked the World Cup qualifiers behind schedule before even starting in South America. Asian qualifiers now have little or no wiggle room.

FIFA said Friday that “with goodwill and flexibility from all sides, appropriate solutions will be found to allow the matches to take place in due course and with minimal disruption.”

Europe faces an increasingly inevitable decision Tuesday to delay the 2020 European Championship by one year. That would leave too few dates for its preferred World Cup qualifying format.

After a difficult week, including a near-total soccer shutdown in Europe, the World Cup qualification plan agreed by FIFA and six continental confederations is in turmoil.

It will miss a scheduled March 2022 target to finish without compromise from stakeholders who have conflicting interests.

FIFA and World Cup organizers in Qatar want to make the finals tournament draw in April 2022. The 32-team tournament kicks off for the first time ever in November — a controversial switch that now offers valuable breathing space.

Here’s a look at the knock-on effects of the coronavirus outbreak on soccer:

Much of soccer’s global schedule works around the International Match Calendar managed by FIFA.

The agreed fixture dates for national team games — finals tournaments, qualifying groups and playoff games, plus friendlies — are mandatory periods for clubs to release their players.

The current calendar runs through 2024.

FIFA led negotiations with clubs that want to limit releasing their players, leagues aiming to keep weekends free for their games, and unions aiming to protect players from burnout

Every two years, national teams play 18 games in nine double-header weeks, plus a longer period for a continental championship or a World Cup.

Europe and South America are aligned. In 2020 and 2024 there are four double-headers — in March, September, October and November — plus the European Championship and Copa America in June and July. In 2021 and 2023 there is a fifth double-header in June.

More competitive games have been added which squeeze out friendlies that are mostly unpopular and less valuable.

Now a pandemic has hit, there is no space for backup plans.

UEFA created Nations League groups for its 55 national teams in 2018, with a Final Four mini-tournament last June, then expanded the next edition starting in September.

CONMEBOL added an extra Copa in 2016, which the United States hosted and top CONCACAF teams played in. It also aimed for back-to-back tournaments in 2019 and 2020 to align with Europe’s four-year cycle.

The fixture list for Argentina and Lionel Messi, and Brazil and Neymar, was clearly set out for this year and next. A total of 18 World Cup qualifying games plus the 2020 Copa America.

All FIFA calendar dates were booked through November 2021 with no reserve days.

It’s already behind schedule after the first two rounds of World Cup qualifiers scheduled on March 26 and 31 were postponed on Thursday.

If the qualifying group of all 10 CONMEBOL nations is to finish by November 2021 there is no easy solution.

Stretching into the two FIFA dates in March 2022 should not be available because the fifth-placed South American team is due to play in inter-continental two-leg playoffs. The opponent would be from Asia, CONCACAF or Oceania.

The schedule falls further behind if the virus outbreak affects national team games in June — either because soccer is still in shutdown or domestic leagues are still playing. Messi’s Barcelona and Neymar’s Paris Saint-Germain are shut down for at least two weeks.

CONMEBOL has not postponed or canceled the 2020 Copa, to be co-hosted by Argentina and Colombia.

An update could follow after UEFA’s meeting on Tuesday maps out a plan for Europe.

UEFA is on track to postpone Euro 2020 by one year. It looked the favored option even before England, France and Germany finally suspended their top-tier leagues on Friday.

Four places in the 24-nation lineup must be decided in playoffs that were scheduled on March 26 and 31. It is unclear when they can be played.

When UEFA consults member federations, clubs, leagues and player unions on Tuesday, the top priority is likely to be options for restarting and completing club competitions. This includes UEFA’s Champions League which could move to single knockout games.

Postponing Euro 2020 from its June 12-July 12 slot would create space amid so much uncertainty. Titles need to be awarded, relegation and promotion places confirmed, and entries decided for the next season of UEFA’s Champions League and Europa League.

Creating Euro 2021 would take the June slot held by the Nations League Final Four. That event looks a non-essential luxury.

A Euro 2021 also disrupts plans for those European nations currently intending to use all 10 available FIFA calendar dates next year for six-team World Cup qualifying groups. Those are due to be drawn on Nov. 29.

Europe has 13 entries in the 2022 World Cup. Ten have been allocated to winners of qualifying groups due to finish in November 2021, and three to winners of playoffs the following March.

Soccer’s world body has less stress overseeing Asia’s lengthy qualifications for the 2022 World Cup, despite postponements in March and June. Africa’s next phase does not resume until October, while CONCACAF and Oceania start next season.

FIFA’s bigger problem is the expanded Club World Cup — a pet project of President Gianni Infantino due for an inaugural 24-team edition kicking off in China in June 2021.

How that tournament — which has no broadcasting or commercial deals yet announced — fits alongside a potentially delayed Euro 2021 and 2021 Copa America is hard to see when soccer is stopped by the pandemic.