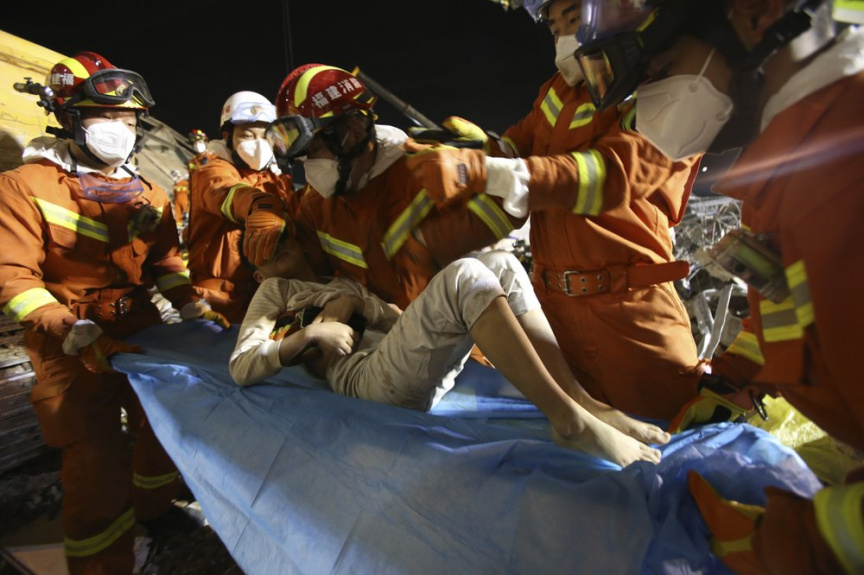 In this March 9, 2020 photo released by Xinhua News Agency, rescuers place a boy pulled from the rubbles of a collapsed hotel on a stretcher in Quanzhou, southeast China's Fujian Province. (Zeng Demeng/Xinhua via AP)

BEIJING (AP) — A 10-year-old boy and his mother have been rescued 52 hours after being trapped in the collapse of a virus quarantine site in southeastern China where 20 people have died.

Video released by rescuers showed the two being pulled from the debris of the hotel that collapsed on Saturday. The woman and boy were discovered late Monday night and they were freed around midnight after three hours of painstaking digging.

The hotel in the city of Quanzhou had been a quarantine site for people exposed to the new coronavirus, which for most people causes only mild or moderate symptoms, such as fever and cough. For some, especially older adults and people with existing health problems, it can cause more severe illness, including pneumonia.

The death toll in the collapse rose to 20 on Tuesday, with 10 people missing. A total of 71 people had been inside the hotel when it crumbled in mere seconds.

The building had been illegally reconstructed several times, the official Xinhua News Agency quoted an unidentified senior official saying Tuesday. Shang Yong, deputy head of the Ministry of Emergency Management, told reporters a comprehensive accident investigation will be launched to identify the cause of the collapse, and any official found responsible would be held to account.

Construction of the building began in 2013 and it was converted into an express hotel in 2018.

Two supermarkets on the first floor were being remodeled, and a pillar reportedly deformed a few minutes before the collapse, Xinhua said Sunday, quoting a district official.

Rescuers have been issued protective gear and disinfectant to minimize exposure to the virus.

The vast majority of people recover from the new virus. According to the World Health Organization, people with mild illness recover in about two weeks, while those with more severe illness may take three to six weeks to recover.

In mainland China, where the virus first exploded, more than 80,000 people have been diagnosed and nearly 60,000 have so far recovered.

Most parts of China are quarantining people from high-risk areas or even those who traveled abroad or simply outside their home regions areas for 14 days.

Many stranded in China resort city amid COVID lockdown