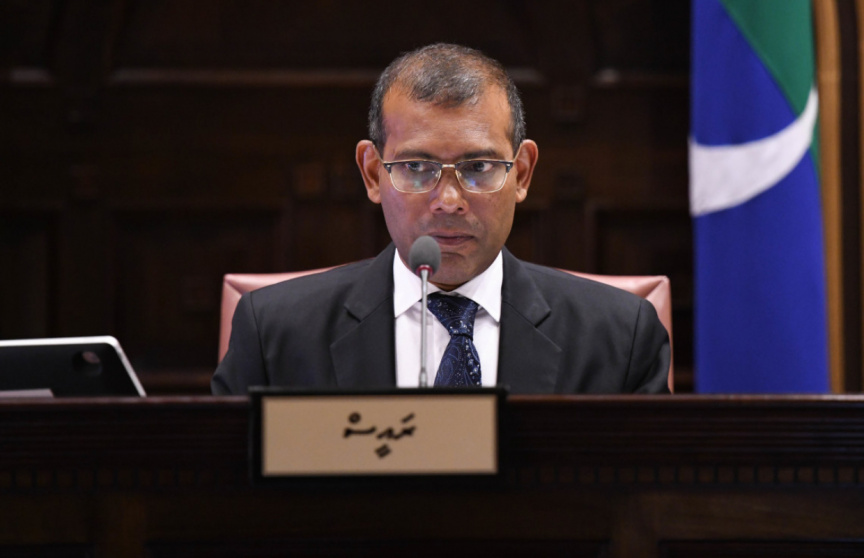 Speaker of the parliament and MDP president Mohamed Nasheed. (Photo/Parliament)

Speaker of the parliament and MDP president Mohamed Nasheed had also indirectly stated his disapproval to postpone the election.

“Protecting the public hygiene, according to the law, is a direct responsibility of the council, and councilors would have to take the first steps to overcome the flu,” said Nasheed.

Nasheed also added that steps to increase safety will be taken when the election is held.

“Queues might have to be made with three feet distances in between. Boxes may have to be increased by a lot. But the honorable MPs wish to carry on.” said Nasheed.

Thulusdhoo MP Ibrahim Naseer even called to speed up the election.

MPs calling to postpone the election are expressing concern over the fact that it will result in people gathering in numbers to vote, which might be dangerous. West Henveiru MP Hassan Latheef responded to these concerns by saying that there would be no fear if the standards recommended by WHO are upheld.

“It can be arranged, for instance, to vote in queues with three feet in between. I am sure that the Election Commission is working on several steps, such as placing sanitizers near every ballot box.” said the MP who is also the chairperson of MDP.

MDP PG group leader, Ali Azim also stated that the party had always advocated to hold elections on the scheduled dates and had the same thoughts for the local council elections.