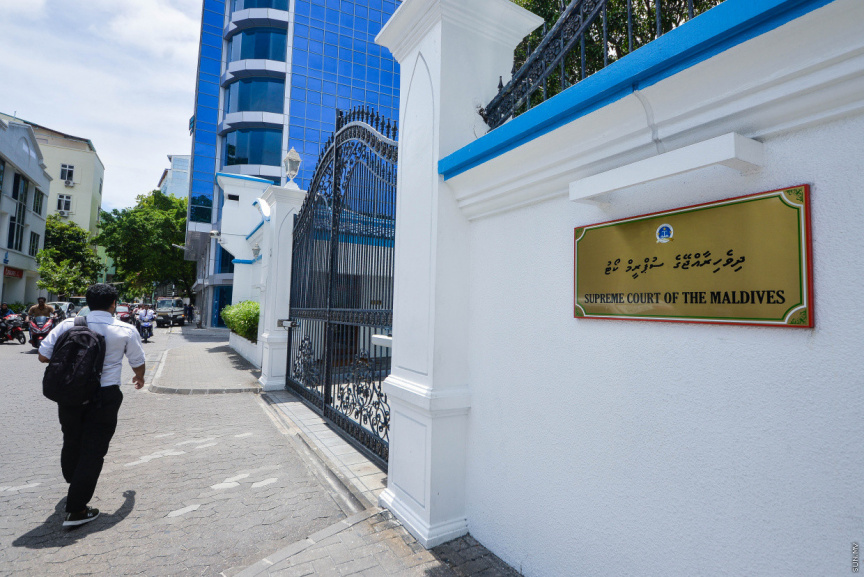 The Supreme Court has issued an injunction to annul a decision by the Elections Commission (EC) to reject the candidacy of a man who had applied to run in the upcoming local council elections, and compel the commission to accept the candidacy.

EC had rejected the candidacy of the man in question, Abdulla Khaleel (Salsaleebuge, H. A. Ihavandhoo), who had applied for membership of the H. A. Ihavandhoo Council, based on declaration of criminal and debt records of candidates for the local council elections issued by the Department of Judicial Administration (DJA) which showed that Khaleel had failed to comply with a court order for settlement of an outstanding debt.

But when Khaleel asked the Ihavandhoo Court for clarification, it stated that the record of failure to pay his fine for an obstruction conviction had been a clerical error. The court said that it paperwork proving the receipt of the fine payment, had sent a message to the Criminal Court informing it of the error, and had revised his record.

Khaleel had lodged a case with the Supreme Court asking EC’s rejection of his candidacy be declared void, and issue an injunction compelling EC to accept his candidacy.

A candidate who has been sentenced by a court of law to pay a debt may qualify for a national election for as long as the candidate has been compliant with the court order in settling the debt.

The Supreme Court, in its ruling, noted that EC claimed Khaleel had failed to present any documents proving lack of outstanding debt within 48 hours of the commission’s decision to reject his candidacy.

The commission said it believed the authority to alter the decision regarding Khaleel’s candidacy to lay solely with the Supreme Court, and asked that the court therefore make its decision.

Chief Justice Muthasim Adnan opinioned that there was reasonable ground to alter EC’s earlier decision, and the judgement was supported by Justice Aisha Shujun Mohamed and Justice Husnu Al Suood.

The decision had therefore been unanimous.

Govt. cancels visas for Umrah due to Covid-19 fears