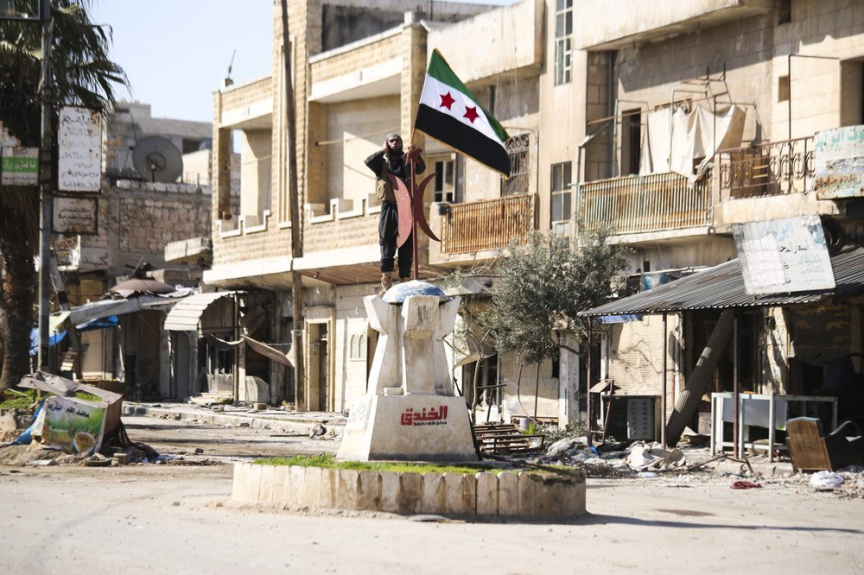 Turkish backed Syrian rebels enter the own of Saraqeb, in Idlib province, Syria, Thursday, Feb. 27, 2020. Turkey-backed Syrian opposition fighters Thursday retook a strategic northwestern town iof Saraqeb, opposition activists said, and cut off the key highway linking the capital, Damascus, with the northern city of Aleppo, days after the government reopened it for the first time since 2012. (AP Photo/Ghaith Alsayed)

ANKARA, Turkey (AP) — Turkey on Friday raised the death toll from a Syrian government airstrike on its forces in northwestern Syria the day before to 33 Turkish troops killed. It was the largest death toll for Turkey in a single day since it first intervened in Syria in 2016.

The deaths, which came in an attack late Thursday, were a serious escalation in the direct conflict between Turkish and Russia-backed Syrian forces that has been waged since early February. The earlier reported death toll was 29 troops.

Rhami Dogan, the governor of Turkey’s Hatay province bordering Syria’s Idlib region, said 32 wounded troops were being treated in hospitals. Turkey has had 54 soldiers killed in Syria’s northwestern Idlib province since the beginning of February.

Shortly after the attack, U.N. Secretary-General reiterated his call for an immediate cease-fire and expressed serious concern about the risk to civilians from escalating military actions,,” U.N. spokesman Stephane Dujarric said.

“Without urgent action, the risk of even greater escalation grows by the hour,” Dujarric said.

The airstrike came after a Russian delegation spent two days in Ankara for talks with Turkish officials on the situation in Idlib, where a Syrian government offensive has sent hundreds of thousands of civilians fleeing towards the Turkish border.

The offensive has also engulfed many of the 12 military observation posts Turkey has in Idlib.

Turkey hosts some 3.6 million Syrians and under a 2016 deal with the European Union agreed to step up efforts to halt the flow of refugees to Europe. Since then Erdogan has repeatedly threatened to “open the gates” in several disputes with European states.

After the airstrike, angry crowds gathered outside the Russian consulate in Istanbul, Anadolu said. Standing in front of a line of riot police and a water cannon, they chanted “Murderer Russia, murderer Putin.”

The airstrike came after Turkey-backed Syrian opposition fighters retook a strategic northwestern town from government forces on Thursday, opposition activists said, cutting a key highway just days after the government reopened it for the first time since 2012.