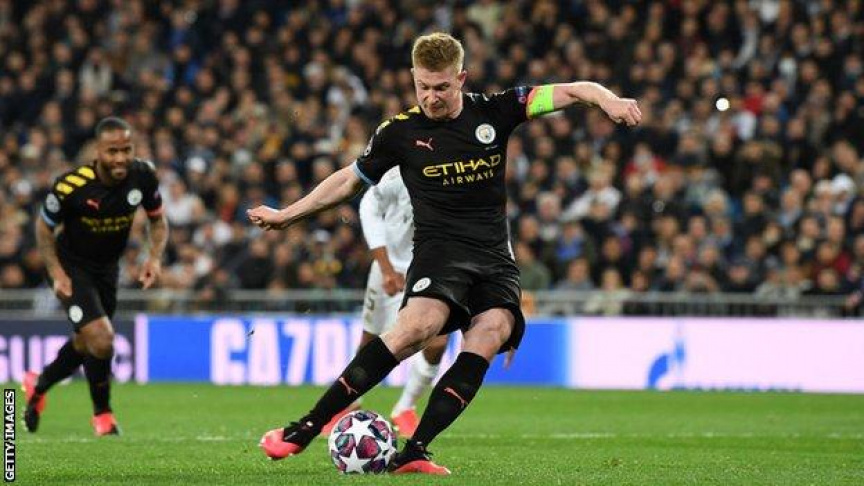 Manchester City produced a late fightback that can only be described as stunning with goals from Gabriel Jesus and Kevin de Bruyne securing a 2-1 win at Real Madrid in the Champions League last-16 tie.

It was Madrid that scored first in the match as they capitalized on a defensive error between City midfielder Rodri and center-back Otamendi to take the lead. Brazilian forward Vinicius Junior raced towards goal with the ball before teeing up Isco to slot home.

Captain Sergio Ramos then shot over as Real Madrid looked to increase their advantage. However, it was Pep Guardiola's City that equalized 12 minutes before time when Jesus slotted in from close range.

In an impressive away display by the reigning English champions, Guardiola's side made things even better for themselves when substitute Raheem Sterling was fouled inside the box. Kevin De Bruyne stepped up to confidently convert from the spot.

Real Madrid were reduced to 10 men with five minutes remaining as Ramos brought down Jesus who was lively throughout the match. The Brazilian forward was brought down as he ran through to goal and Ramos was shown a red card.

City is now in the driving seat as they head to the second leg which will be played at home at the Etihad Stadium on March 17, 2020.

French side Olympique Lyon produced a spirited display to take a surprise lead in their Champions League last-16 tie with Juventus.

The first leg of the tie was won by Lyon thanks to a goal from Lucas Tousart.

Tousart scored the only goal of the match as Lyon won 1-0.

Italian champions Juve started confidently but failed to create any clear chances in the match.

The visitors with a starting eleven that included the likes of Cristiano Ronaldo and Paulo Dybala continued to have more possession but struggled to penetrate the Lyon defense, failing to register a single shot on target.