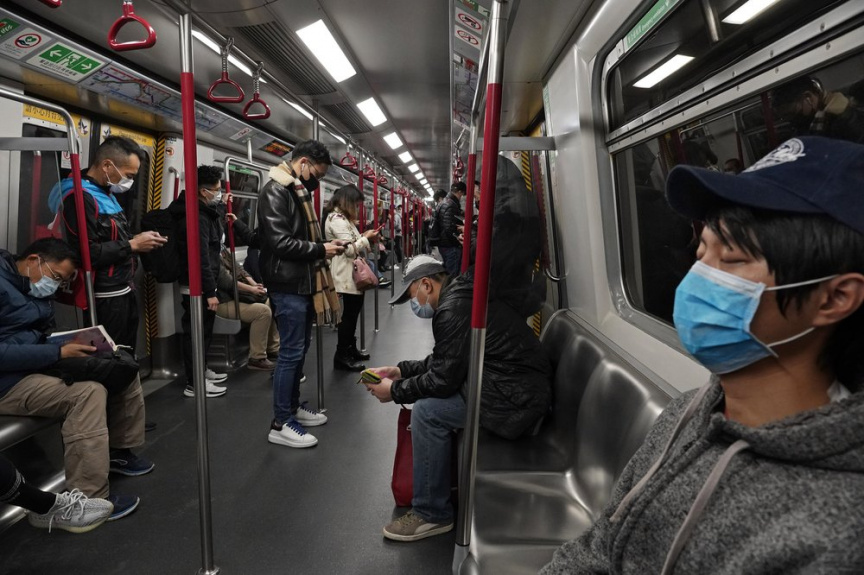 Significant jumps in cases outside China have raised concern of the outbreak getting out of control.

South Korea reported a jump in cases Monday and now has 763. It’s the third-highest national total behind China and Japan.

New outbreaks in Italy and Iran have also raised concern.

THIS IS A BREAKING NEWS UPDATE. AP’s earlier story is below:

South Korea on Monday reported 161 more cases of a new virus that has spread rapidly around a southwestern city, bringing the nation’s total to 763 cases a day after the president called for “unprecedented, powerful” steps to combat the outbreak.

Two more deaths were confirmed, raising South Korea’s death toll to seven from the COVID-19 illness, which is caused by a newly identified coronavirus that has infected tens of thousands of people, mostly in China.

More than 140 of South Korea’s new cases were in and near the city of Daegu, where most of the country’s infections have so far occurred. Six of the seven deaths were linked to a hospital in Cheongdo, near Daegu, where a slew of infections were confirmed among patients in a mental ward.

While officials have expressed hope they could contain the outbreak to the region surrounding Daegu, some experts noted signs of the virus circulating nationwide, pointing to a number of cases in the capital, Seoul, and elsewhere that weren’t immediately traceable.

Far from where the illness first emerged, authorities in Italy battled to contain Europe’s first major outbreak and Iran reported eight deaths — the highest toll outside of China. Some of the disease clusters identified in recent days have shown no link to China, a worrying sign of the virus spreading beyond control.

The Iranian health ministry said there were now 43 confirmed cases in Iran, which did not report its first case of the virus until Wednesday.

In Italy’s northern Lombardy region, which includes the nation’s financial capital, Milan, the governor announced Sunday that the number of confirmed cases stood at 110. Italy now has 152 cases, the largest number outside of Asia, including three deaths, the most recent on Sunday.

Venice, which is full of tourists for Carnival events, reported its first two cases, said Veneto Gov. Luca Zaia, whose region includes the lagoon city. It wasn’t immediately known if the two infected had participated in Carnival festivities.

As Italy scrambled to check the spread of the virus, authorities announced that all Carnival events had been called off as well as major league soccer matches in the stricken region. Cinemas and theaters were also ordered shuttered, including Milan’s legendary La Scala.

Warning that China’s virus epidemic is “still grim and complex,” President Xi Jinping called for more efforts to stop the outbreak, revive industry and prevent the disease from disrupting spring planting of crops. China has counted about 77,000 cases and 2,400 deaths.

Xi defended the ruling Communist Party’s response as “timely and effective” in a video conference with officials in charge of anti-disease work, according to the official Xinhua News Agency.

“The current epidemic situation is still grim and complex,” Xinhua cited Xi as saying. “Prevention and control are at the most critical stage.”

The number of new Chinese cases has seesawed daily but has remained under 1,000 for the past four days. The outbreak is still largely concentrated in the central province of Hubei and its capital, Wuhan, where the illness was first identified in December.

Wuhan and nearby areas remain under a lockdown, with most transportation halted and public events canceled, to try to stop the spread of the illness, and China has built hospitals and sent thousands of medical staff to help the area’s overwhelmed health-care system.

South Korean President Moon Jae-in said his government had increased its anti-virus alert level by one notch to “Red,” the highest level. It allows for the temporary closure of schools and reduced operation of public transportation and flights to and from South Korea.

The new school year for kindergartens, elementary, middle and high schools in South Korea was put off by one week until March 9.

Moon said the outbreak “has reached a crucial watershed,” and that the next few days will be critical. “We shouldn’t be bound by regulations and hesitate to take unprecedented, powerful measures,” he said.

Most of the South Korean cases have been reported in and around the country’s fourth-largest city, Daegu, which has a population of 2.5 million. The biggest cluster of cases has been linked to a local branch of the Shincheonji church, which mainstream Christian organizations have viewed as a cult movement.

The Shincheonji church said it shut all its local branches since a church member tested positive for the virus on Feb. 18.

Daegu Mayor Kwon Yong-jin said the city’s total could increase significantly because authorities were intensively examining of church members with virus-related symptoms, which include fever, cough and in severe cases, shortness of breath and pneumonia.

South Korea has the third-highest national total of COVID-19 cases behind China and Japan. Most of Japan’s cases were from the Diamond Princess cruise ship, where nearly one-fifth of its 3,711 passengers and crew became infected.

‘Time is everything’: World braces for spread of virus