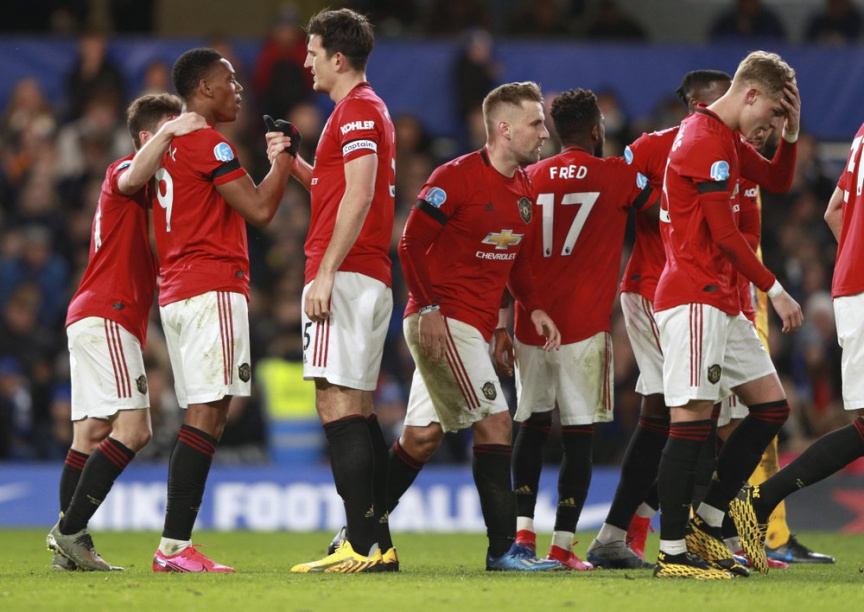 LONDON (AP) — Manchester United threw open the race for the final Champions League qualification spots in the Premier League by beating fourth-place Chelsea 2-0 thanks to headers by Anthony Martial and Harry Maguire on Monday.

Martial glanced in a header off a right-wing cross by Aaron Wan-Bissaka to give United the lead in the 45th minute at Stamford Bridge, before Maguire planted home a corner from January signing Bruno Fernandes in the 66th.

Maguire, United’s captain, was perhaps fortunate to still be on the field, with the match officials opting not to punish the England defender for appearing to kick out at Michy Batshuayi after tumbling off the playing surface in front of the dugouts.

“I know I caught him but I felt like he was going to fall on me and the natural reaction was to straighten my leg so that if he was to fall on me, to hold him up,” Maguire said. “It probably looks worse than it was.

Chelsea was on the wrong end of two other decisions by VAR, firstly disallowing a volleyed goal by Kurt Zouma in the 56th because of a push by Cesar Azpilicueta on United left back Brandon Williams. Azpilicueta seemed to have been pushed a split-second earlier by Fred.

Then, with 13 minutes to go, substitute Olivier Giroud had a goal ruled out by VAR for a tight offside, leaving Chelsea manager Frank Lampard looking thoroughly glum as he sat in his technical area.

Chelsea has long been in fourth place, but has only won three of its last 11 games in the league to give a slew of rivals clubs hope of catching up.

One of them is United, which climbed to seventh place with this win - three points behind Chelsea and two adrift of fifth-place Tottenham.

“This season, we have been far too inconsistent,” Maguire said. “We have won at Manchester City, beat Chelsea at home, got a point against Liverpool, but we have let ourselves down against the teams where the pressure is on to break them down.”

Injury problems are starting to bite at Chelsea, too. Top scorer Tammy Abraham and winger Callum Hudson-Odoi missed the game because of injury, while central midfielder N’Golo Kante lasted 11 minutes before hobbling off. Center back Andreas Christensen didn’t come out for the second half after sustaining a knock to the head late in the first period, just before Martial beat the Denmark defender to a header for the first goal.

Lampard’s main gripe, though, was his team’s failure to finish off chances once again. Batshuayi was the biggest culprit, spurning two great chances in the first half in his first start in the league this season.

“We are fourth because of some of the good stuff we’ve done and because of the nature of the league, everyone taking points off each other,” Lampard said. “But there’s a lot of work to do because you can see the problem - that’s putting the ball in the back of the net.

“I feel like a broken record. We have to put things to bed by scoring goals.”

Chelsea hosts Tottenham on Saturday and would finally get overtaken with another loss.

Nigeria striker Odion Ighalo, who signed for United on deadline day in the January transfer window, came on in second-half stoppage time for his debut and had a late chance saved by Willy Caballero, who again started in goal ahead of Kepa Arrizabalaga.

Two players struck the post from free kicks in the second half, Fernandes for United and Mason Mount for Chelsea.