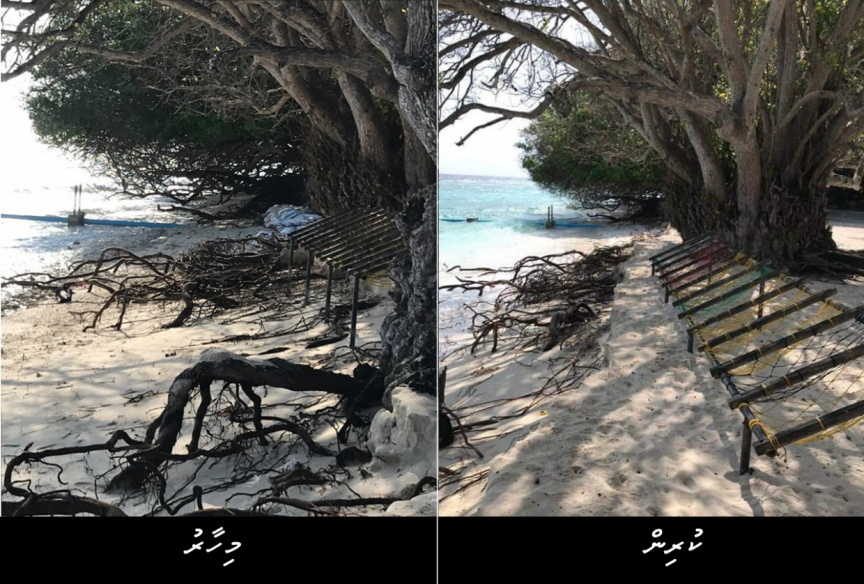 Combined photo shows the beach area of B. Kudarikilu. The photo on the right is of before alarming rates of erosion affected the island while the while on the left is afterward.

B. Kudarikilu council has expressed concern that the island is being eroded at an alarming rate.

Council president Abdul Hannaan Abbaas stated that it was the North East coast of the island that is the worst hit. He said that around 50 feet had been eroded from the area.

The area is home to several old trees and pictures show that nearly half of the roots of these trees exposed to the water. The erosion had reached the areas where sewerage pipes and septic tanks are located, he added,

Abdul Hannaan stated that the matter had been brought to the attention of the government which has not made a response so far.

“We sent a photo file (of the situation) to the Ministry. I personally messaged the Minister with photos,” said Abdul Hannaan.

The islanders are now working to mitigate the situation as much as they can. Sandbags have now bee placed in some areas of the island.

Maldivian islands are constantly affected by erosion. However, previously unseen levels of erosion this year have begun raising alarms. Experts say that climate change is the cause of this. Some other islands affected include B. Dharavandhoo, Kendhoo, and R. Fainu.