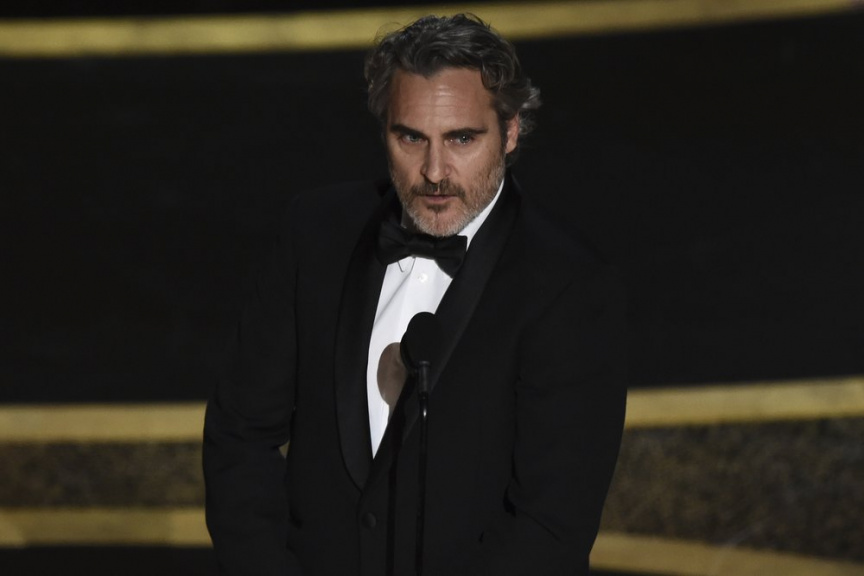 LOS ANGELES (AP) — Joaquin Phoenix’s visceral portrayal of a troubled man’s descent into villainy in “Joker” earned him his first Oscar in a career that has seen personal and professional highs and lows.

“I’ve been a scoundrel in my life. I’ve been selfish, I’ve been cruel at times and hard to work with ... but so many of you in this room have given me a second chance,” Phoenix said in accepting the award Sunday. When people guide each other toward redemption, he said, “that is the best of humanity.”

In sometimes-rambling remarks, Phoenix addressed gender and ethnic inequality and even the treatment of dairy cows. He wrapped it all in hopeful words, both his own and those of his late brother, actor River Phoenix.

“Human beings at our best are so inventive and creative and ingenious. I think when we use love and compassion as our guiding principles we can ... create systems of change beneficial to all sentient beings and the environment,” Phoenix said. “When he was 17, my brother wrote this lyric: ‘Run to the rescue with love, and peace will follow.’”

He was in a bit of a daze with tears in his eyes when he walked offstage. Looking down at his Oscar he asked, “Whose is this?”

“It’s yours,” said the woman escorting him out.

Phoenix was nominated twice before for lead actor, for 2012’s “The Master” and his performance as Johnny Cash in 2005’s “Walk the Line.” He received a supporting bid for 2000’s “Gladiator.”

“Joker” tracks the Batman-universe character from a mentally ill clown-for-hire to his incarnation as the masked crusader’s nemesis. Phoenix’s victory marks a rare instance of a top acting award going to a comic book-based film and a hit that has grossed more than $330 million domestically and is the international record-holder for a R-rated film with $1 billion-plus. Heath Ledger also won an posthumous Oscar in 2009, for supporting actor, for playing the Joker in 2008′s “The Dark Knight.”

The effort Phoenix undertook for the role was obsessive: He shed 50 pounds, broke his longtime rule against watching daily scene clips and studied dance videos to determine how his character, Arthur Fleck, would move. He found his role model in classic Hollywood star Ray Bolger and what Phoenix called the arrogant demeanor in Bolger’s steps to the tune “Old Soft Shoe.”

Phoenix, who began his career as a child actor in TV projects opposite River and sister Summer, moved on to noteworthy roles in 1989’s “Parenthood” and other big-screen projects. When River Phoenix, 23, died of a drug overdose in 1993, Joaquin Phoenix withdrew from public life and acting. He resumed his career to acclaim two years later with “To Die For” and built a solid body of film work.

In his version of an artistic prank, Phoenix’s announced retirement from acting to pursue a rap career, which turned out to be fodder for a 2010 mockumentary film, “I’m Still Here,” which earned mixed reviews and flopped at the box office. It didn’t prevent him from being taken seriously by the industry, with roles in films such as 2004”s “Hotel Rwanda” coming his way.

Also competing in the category were Antonio Banderas for “Pain and Glory”; Leonardo DiCaprio, “Once Upon a Time ... in Hollywood”; Adam Driver, “Marriage Story” and Jonathan Pryce ,“The Two Popes.”