Architect of US peace plan blames Palestinians for violence 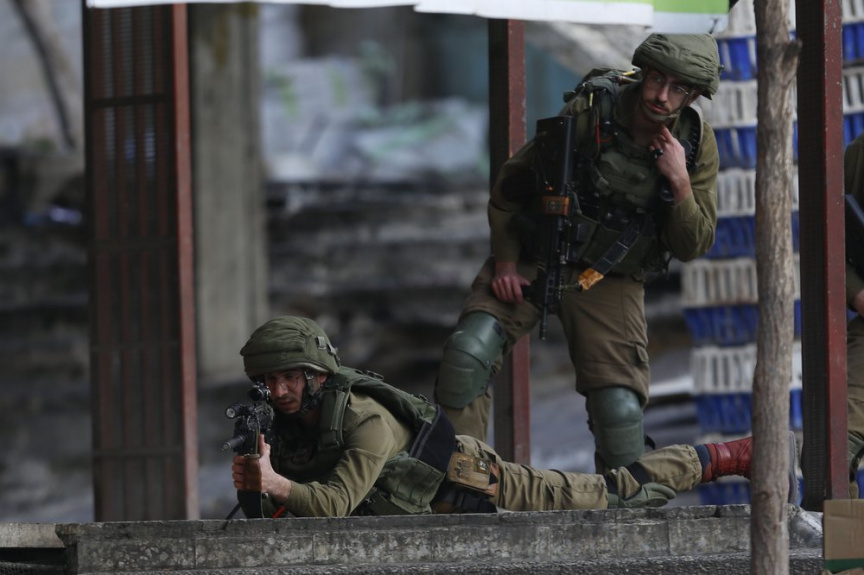 Israeli soldiers take aim at Palestinian protesters during clashes in the West Bank city of Hebron, Thursday, Feb. 6, 2020. Israeli forces have killed two Palestinians in clashes in the occupied West Bank and a third in Jerusalem after he opened fire at a police officer. The killings came hours after a car-ramming attack elsewhere in the city Thursday wounded 12 Israeli soldiers. Tensions have soared following last week's release of President Donald Trump's Mideast initiative, which greatly favors Israel and was rejected by the Palestinians. (AP Photo/Majdi Mohammed)

UNITED NATIONS (AP) — The chief architect of the U.S. blueprint to resolve the decades-old conflict between Israelis and Palestinians on Thursday blamed Palestinian President Mahmoud Abbas for soaring tensions and violence in the occupied West Bank since the plan’s release last week.

Jared Kushner, the son-in-law and adviser to President Donald Trump who spent nearly three years working on the plan, said leaders who are ready for a state “don’t call for days of rage and encourage their people to pursue violence if they’re not getting what they want.”

He said he thinks Abbas “was surprised with how good the plan was for the Palestinian people, but he locked himself into a position” by rejecting it before it came out.

The Palestinian president is going to different forums and putting forward old talking points when the situation on the ground has changed and “this might be the last chance that they have to actually resolve it in a good way,” Kushner said.

Abbas is scheduled to address the U.N. Security Council on Tuesday and then appear at a news conference with former Israeli Prime Minister Ehud Olmert, an opponent of the U.S. plan who was forced to resign a decade ago ahead of a corruption indictment that later sent him to prison for 16 months.

Leaders who had their chances and failed should be encouraging other people’s efforts in trying to make peace, “as opposed to trying to grab a headline when you’re irrelevant and try ... to get involved in a situation to get some attention,” Kushner said.

“It comes from a lot of jealousy that they couldn’t get it done themselves,” he added.

After briefing the U.N. Security Council at a private lunch at the U.S. Mission to the United Nations, Kushner told a small group of journalists that the U.S. proposal may be the last chance because the rate of expansion of Israeli settlements may preclude a contiguous Palestinian state.

Right now, Kushner said, “it’s very, very difficult to have a contiguous state where you can drive from the top to the bottom.”

“If you look at the rate of expansion of Israeli settlements and if you look at the aspirations of the Palestinian people you’re about to get to a crossroad where you almost can’t come back,” he said.

He said the 180-page plan “was what we got Israel to agree to” and the most constructive thing the Palestinians can do is to sit down with the Israelis and go over it “line by line.”

“If they would like to meet, we’re happy to do it, but we’re not going to chase them,” Kushner said.

He called his meeting with the Security Council “very constructive,” with lots of questions. British Ambassador Karen Pierce, reflecting the comments of other members, called it “interesting and productive.”

The U.S. plan, unveiled by President Donald Trump on Jan. 28, envisions a disjointed Palestinian state that turns over key parts of the West Bank to Israel, siding with Israel on key contentious issues including borders and the status of Jerusalem and Jewish settlements.

The Palestinians seek all of the West Bank and east Jerusalem — areas captured by Israel in the 1967 Mideast war — for an independent state and the removal of many of the more than 700,000 Israeli settlers from these areas.

But under terms of the “peace vision” that Kushner oversaw, all Israeli settlers would remain in place, and Israel would retain sovereignty over all of its settlements as well as the strategic Jordan Valley.

The proposed Palestinian state would be demilitarized and give Israel overall security control. In addition, the areas of east Jerusalem offered to the Palestinians for a capital consist of poor, crowded neighborhoods located behind a hulking concrete separation barrier.

Kushner, who will continue to oversee the peace plan, said he and his team will follow up with the announcement shortly that a U.S.-Israeli commission is being established to turn its “conceptual map” into a detailed map with the goal of making sure “you can have contiguous territory” for a Palestinian state.

It can take “a couple of months” for technical teams to come up with a map, Kushner said, and during that time he and his team plan to consult with European and Middle Eastern governments to further explain the plan.

He said that “there’s a ton of cracks” in European unity on the U.S. proposal.

“The European Union was not able to get a consensus statement on this, which shows that there’s a lot of people ... interested in working on a new approach, which is good,” Kushner said.

Arab leaders want to focus on tackling radicalization and extremism and providing economic prosperity for their people, and the international community is “tired of this issue” and wants to see it resolved, Kushner said.

Looking back at the lengthy process of drafting the plan, Kushner said that during four meetings with Abbas, “I never felt like he was willing to get into details, either because he’s not a detail oriented person or because he didn’t know what he wanted to accomplish.”

Calling the Israeli-Palestinian conflict “the hardest problem in the world” to solve, he said the peace plan is “a good first step” to start a discussion “that leads to a better pathway.”

“Not doing anything was not an option,” Kushner said. “I think the noble thing is to pursue peace and to try to figure out how do you take a complicated problem and make badly needed progress.”

US says Chinese military stole masses of US data