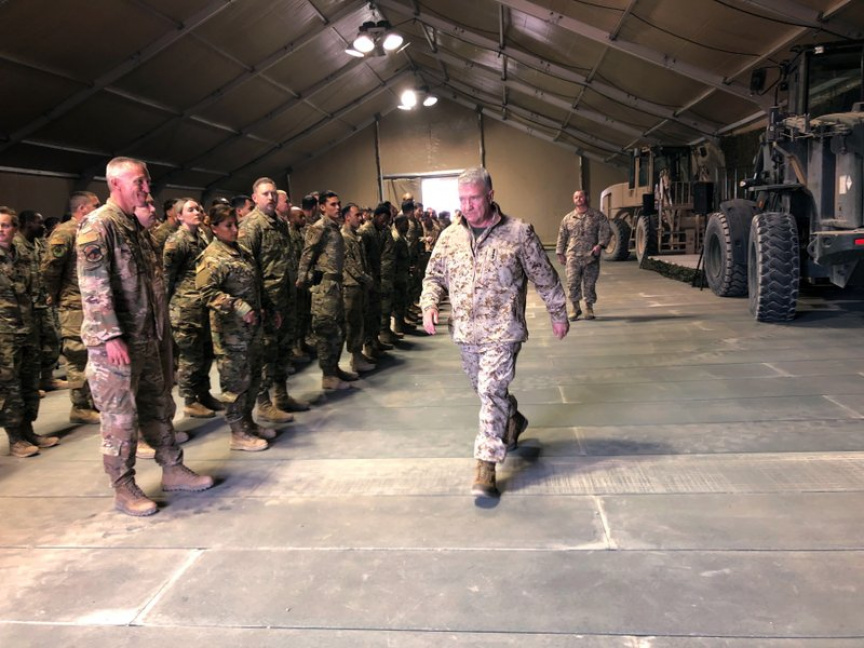 PRINCE SULTAN AIR BASE, Saudi Arabia (AP) — Across the vast expanse of this desert air base, hundreds of tents have popped up and a newly arrived squadron of U.S. Air Force F-15E fighters is lined up on the tarmac, flying daily missions over Iraq and Syria. Off in the distance, two American Patriot missile batteries are scanning the skies, prepared to knock down any Iranian attack against the Saudi kingdom.

The U.S. troop presence here has grown to roughly 2,500 since last summer, when the U.S. announced it had begun deploying forces to what once was a major U.S. military hub. The return of U.S. forces to Prince Sultan Air Base is one of the more dramatic signs of America’s decision to beef up troops in the Middle East in response to threats from Iran.

On Wednesday, the top U,S. commander in the Middle East spent a few hours meeting with his commanders and troops here, assessing what he called a “sweet spot” of U.S. force projection in the region.

Prince Sultan Air Base, said Marine Gen. Frank McKenzie, presents a complicated target for Iran to hit and provides a remote location for U.S. troops, fighter jets and other assets. It also provides greater security for Saudi Arabia, which asked for U.S. help in the wake of an Iranian drone and missile attack on oil facilities in the kingdom last September.

Right now, the large white tents that flap in the stiff winds give a temporary feel to the mission. But according to Air Force Col. Jason King, vice commander of the 378th Air Expeditionary Wing here, there is “prudent planning” underway that could lead to the tents being replaced with trailers and other more permanent structures.

Saudi Arabia is a decades-long American ally, a relationship initially built on America’s dependence on Middle East oil. The military connection has been strong, even during periods of stress in the broader relationship, including in the aftermath of the Sept. 11, 2001, attacks in which most of the hijackers were Saudis. The kingdom also has been harshly criticized in Congress for the 2018 killing of Saudi dissident and Washington Post columnist Jamal Khashoggi and for its role in errant airstrikes in Yemen that have killed or injured many civilians.

McKenzie is careful when asked how long the U.S. will stay.

“I think this is an important part of our architecture right now and we will continue to evaluate that as we go forward,” he said. “It’s a well defended place and we can put a lot of combat power here.”

The base’s future, he told reporters traveling with him, is part of a discussion with Defense Secretary Mark Esper about how many forces are needed in the region. That calculation is being made against the backdrop of President Donald Trump’s push to get U.S. forces out of the Middle East and end what he calls America’s “endless wars.”

Speaking to troops inside one of the large tents, McKenzie acknowledged the less-than-ideal living conditions. But he said their presence sends a signal to Iran that the U.S. is serious, and it also gives him more options for any military action in the region.

The base is a vivid representation of the struggle to balance the escalating threats in the Middle East against the Pentagon’s insistence that the U.S. military shift more of its focus to Asia and the risks from China and Russia.

U.S. tensions with Iran have been roiling for months but spiked after the U.S. carried out a drone strike in Iraq that killed Qassem Soleimani, Iran’s top general. In response, Iran on Jan. 8 fired as many as two dozen ballistic missiles at two Iraqi bases where U.S. troops were stationed. The U.S. had no Patriot defenses at those bases because it judged other locations, in Saudi Arabia and elsewhere in the Gulf, to be more likely Iranian targets.

U.S. officials contend that both sides do not seek war and have moved to de-escalate, but threats from Iranian-backed militias in Iraq and Syria still pose a worrisome threat.

Wednesday’s stop at Prince Sultan Air Base was the second time in a week that McKenzie has visited a military site in the Middle East where the U.S. recently set up Patriot batteries to protect against missiles fired by Iran and Iranian-backed militias in Syria and Iraq. Reporters accompanied McKenzie to the first site on the condition they not disclose its location for security reasons.

It was a little more than a year ago when then-Defense Secretary Jim Mattis pulled four Patriot batteries out of Jordan, Bahrain and Kuwait. It was all part of the Pentagon’s new national defense strategy that pointed to China and Russia as key adversaries and the top priorities for the future.

But the rapidly escalating threat from Iran — which includes attacks against tankers and other commercial ships in the Gulf region as well as the strikes against Saudi facilities and U.S. troops — has forced the U.S. to reverse those moves and send even more of the high-tech systems to the region. In addition to the Patriots, the U.S. has also sent a THAAD anti-ballistic missile defense system, which complements the Patriots by providing a defense against ballistic missiles traveling outside the Earth’s atmosphere.

According to Army Lt. Col. Tom Noble, there are four Patriot batteries in Saudi Arabia, including the two at Prince Sultan Air Base. Noble, the commander of the Air Defense Artillery Battalion, said each battery has from six to nine truck-based missile launchers that routinely scour the air for threats.