Lava gushes from Philippine volcano as ash spreads to Manila 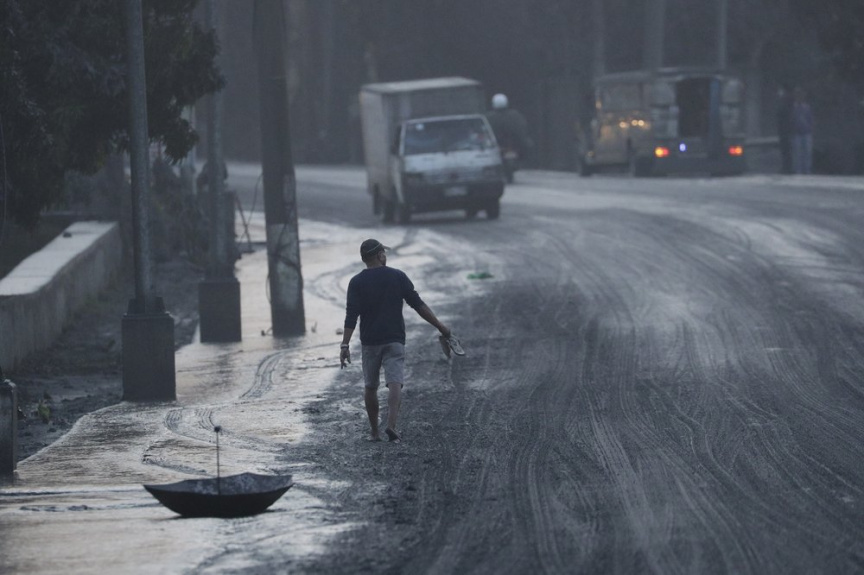 A man walks along ash fall covered road as Taal Volcano continues to spew ash on Monday Jan. 13, 2020, in Tagaytay, Cavite province, south of Manila, Philippines. The small volcano near the Philippine capital that draws tourists for its picturesque setting in a lake erupted with a massive plume of ash and steam Sunday, prompting the evacuation of tens of thousands of people and forcing Manila's international airport to shut down. (AP Photo/Aaron Favila)

TAGAYTAY, Philippines (AP) — Red-hot lava gushed out of a Philippine volcano Monday after a sudden eruption of ash and steam that forced villagers to flee and shut down Manila’s international airport, offices and schools.

There were no immediate reports of casualties or major damage from Taal volcano’s eruption south of the capital that began Sunday. But clouds of ash blew more than 100 kilometers (62 miles) north, reaching the bustling capital, Manila, and forcing the shutdown of the country’s main airport with more than 240 international and domestic flights cancelled so far.

An alternative airport north of Manila at Clark freeport remained open but authorities would shut it down too if ashfall threatens flights, the Civil Aviation Authority of the Philippines said.

The government’s disaster-response agency reported about 8,000 villagers have moved to at least 38 evacuation centers in the hard-hit province of Batangas and nearby Cavite province, but officials expect the number to swell with hundreds of thousands more being brought out of harm’s way. Some residents could not move out of ash-blanketed villages due to a lack of transport and poor visibility. Some refused to leave their homes and farms, officials said.

“We have a problem, our people are panicking due to the volcano because they want to save their livelihood, their pigs and herds of cows,” Mayor Wilson Maralit of Balete town told DZMM radio. “We’re trying to stop them from returning and warning that the volcano can explode again anytime and hit them.”

Maralit, whose town lies along the coastline of Taal Lake surrounding the erupting volcano, appealed for troops and additional police to be deployed to stop distraught residents from sneaking back to their high-risk coastal villages.

After months of restiveness that began last year, Taal suddenly rumbled back to life Sunday, blasting steam, ash and pebbles up to 10 to 15 kilometers (6 to 9 miles) into the sky, according to the Philippine Institute of Volcanology and Seismology.

The government volcano-monitoring agency raised the danger level around Taal three notches to level 4, indicating “an imminent hazardous eruption.” Level 5, the highest, means a hazardous eruption is underway and could affect a larger area with high-risk zones that would need to be cleared of people, said Renato Solidum, who heads the institute.

Ma. Antonio Bornas, the agency’s chief volcanologist, said lava spurted out in fountains out of the volcano early Monday while its ash and steam ejections eased. It’s hard to tell when the eruption would stop, she said, citing Taal’s similar restiveness in the 1970s that lasted for about four months.

With the steam and ashfall easing, some residents began to shovel away the few inches of ash that covered everything from homes to cars and trees in Tagaytay, a popular upland resort city on a ridge that overlooks the picturesque volcano in the middle of a crater lake.

Usually bustling with traffic and tourists, many of Tagaytay’s restaurants and coffee shops were closed, its main road covered in volcanic filth and mud.

The volcanology institute reminded the public that the small island where the volcano lies is a “permanent danger zone,” although fishing villages have existed there for years. It stressed that the “total evacuation” of people on the volcano island and coastal areas “at high risk to pyroclastic density currents and volcanic tsunami within a 14-kilometer (8.7-mile) radius from Taal.”

Aviation officials must advise airplanes to avoid flying at a certain distance from the volcano “as airborne ash and ballistic fragments from the eruption column pose hazards to aircraft,” it said.

Authorities continue to detect swarms of earthquakes, some of them felt with rumbling sounds, and a slight inflation of portions of the 1,020-foot (311-meter) volcano, officials said and advised residents to stay indoors and wear masks and goggles outdoors.

Government work and classes in schools in a wide swath of towns and cities were suspended Monday, including in Manila, to avoid health risks posed by the ashfall.

One of the world’s smallest volcanoes, Taal is among two dozen active volcanoes in the Philippines, which lies along the so-called Pacific “Ring of Fire,” a seismically active region that is prone to earthquakes and volcanic eruptions.

About 20 typhoons and other major storms each year also lash the Philippines, which lies between the Pacific and the South China Sea, making it one of the world’s most disaster-prone countries.

At least 31 dead in floods, landslides in Philippines