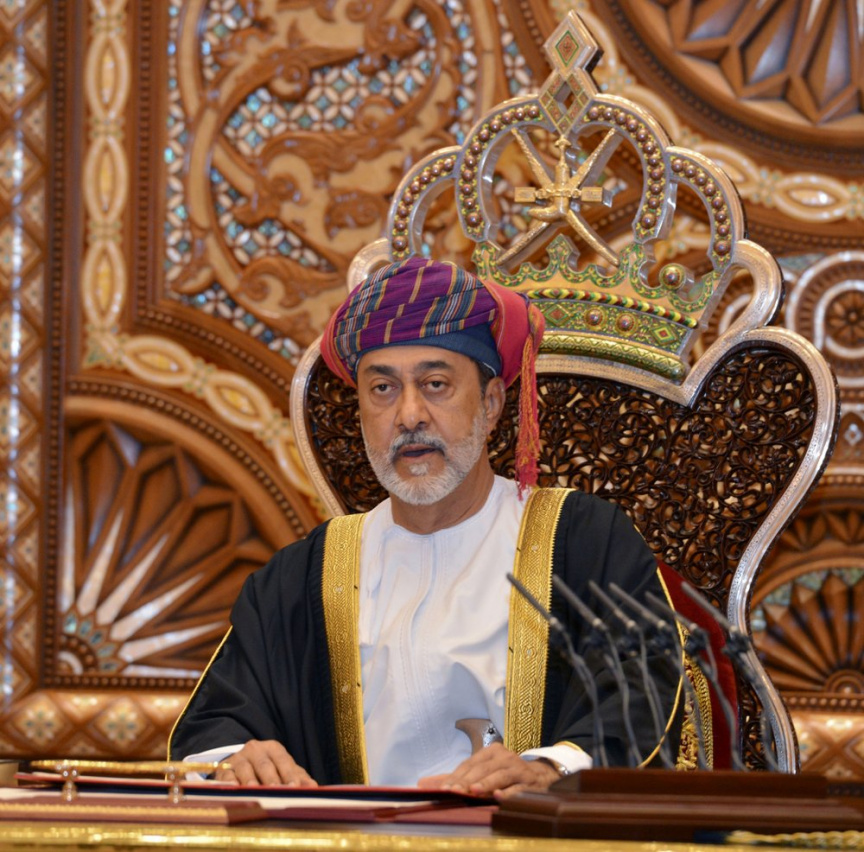 In this photo made available by Oman News Agency, Oman's new sultan Haitham bin Tariq Al Said, makes his first speech after swearing in at the Royal Family Council in Muscat, Oman, Saturday, Jan. 11, 2020. Sultan Qaboos bin Said, the Mideast's longest-ruling monarch who seized power in a 1970 palace coup and pulled his Arabian sultanate into modernity while carefully balancing diplomatic ties between adversaries Iran and the U.S., has died. He was 79. (Oman News Agency via AP)

The new ruler, who was Oman’s culture minister, spoke after being named successor to Sultan Qaboos, the Middle East’s longest-ruling monarch whose death was announced Saturday. He died at the age of 79 after years of an undisclosed illness.

Sultan Haitham’s message to Omanis and the world was clear: Oman would continue down the path laid by Qaboos as a facilitator of peace.

“We will follow the same line as the late sultan, and the principles that he asserted for the foreign policy of our country, of peaceful coexistence among nations and people, and good neighborly behavior of non-interference in the affairs of others,” he said in his first public remarks as sultan.

The 66-year-old shook hands with family members and top security brass before witnessing ceremonial cannon fire. The Al Said family has ruled Oman since the eighteenth century, and once ruled over Zanzibar too, off the coast of Tanzania.

Oman sits on the southeastern tip of the Arabian Peninsula, with Iran to its east. It shares borders with Yemen, Saudi Arabia and the United Arab Emirates.

Sultan Qaboos shaped Oman’s policy of diplomatic balancing. Under his leadership, Oman was a facilitator of talks between adversaries Iran and the United States. Oman is a close ally of Washington and viewed as a valuable regional player.

Qaboos’ choice of successor was a closely guarded secret believed to have been known only to the sultan, who did not have any children.

Qaboos, who came to power nearly 50 years ago when he deposed his father in a 1970 palace coup, refused to join the Saudi-led coalition at war in Yemen and kept the country’s border with Yemen open. Oman has also played a conciliatory role between the Houthis and their Gulf enemies, hosting peace talks and facilitating prisoner exchanges.

Oman did not join a Saudi- and Emirati-led boycott of neighboring Qatar, and has maintained relations with rivals Saudi Arabia and Iran. The sultanate was the only Gulf Arab country that kept its embassy in Damascus open throughout Syria’s now 9-year civil war.

In 2018, the sultan hosted Israeli Prime Minister Benjamin Netanyahu in a surprise visit, further cementing Oman’s strategic ability to be a facilitator and even mediator. In a tweet Saturday, Netanyahu said that the meeting was “unbelievably important and exciting,” and called the late sultan “a great leader who worked tirelessly to promote peace and stability in our region.”

In the capital Muscat, soldiers stood guard and troops stood with machine guns atop SUVs as Omanis gathered along a highway to see the motorcade carrying the sultan’s body for burial.

Thousands also gathered at the Sultan Qaboos Mosque where funeral prayers were held Saturday. The mosque is an architecturally stunning complex of white marble and manicured gardens that reflects how the sultan modernized his country without eschewing its cultural heritage or building towering skyscrapers like other neighboring Gulf capitals.

Following Islamic tradition, Qaboos was buried before nightfall. His successor was announced by afternoon Saturday.

“It is a sad day in Oman, but also represents a new beginning with a new leader,” a presenter on the state TV said soberly.

The speed and manner in which his successor was named suggest the Al Said family wanted to project a sense of unity, continuity and stability as tensions run high in the Persian Gulf, particularly between the U.S. and Iran in the last days of Sultan Qaboos’ life.

“The need for an Omani ‘neutral space’ for dialogue and message passing is more important than ever,” Kristian Coates Ulrichsen, a Gulf expert at Rice University’s Baker Institute for Public Policy, said.

The country’s Defense Council, in the presence of the Royal Family Council, was shown opening a sealed letter in which Qaboos names his choice for successor. The Defense Council then read the contents of the letter aloud before all those present in the meeting, announcing Haitham bin Tariq Al Said as the dynasty’s heir.

The Royal Family Council had called on the Defense Council to unseal the letter, according to Oman’s state news agency. According to Omani succession laws, the royal council could have met and selected an heir from among them, only consulting the letter if they could not agree within three days. Instead, they chose to defer to the letter and air its reading on Omani state TV — a move underscoring how beloved Qaboos was and which helps lend more legitimacy to his successor.

Sultan Haitham is a career diplomat who’d long been tapped as one of the front-runners for succession. His role as minister of national heritage and culture helped project Omani influence. Haitham is a cousin of Qaboos, according to Gulf media reports.

The Oxford graduate spent 16 years in various roles with the foreign ministry, starting in 1986. He was the ministry’s undersecretary for political affairs and its secretary general. He has sometimes also chaired Cabinet meetings.

Unlike other Gulf Arab rulers and their heirs, he has not overseen important defense and security portfolios. He has been described as quieter and less assertive than other members of the royal family.

Ulrichsen, the Gulf expert, said Sultan Haitham’s background in culture and heritage is another sign of continuity with Sultan Qaboos, whose love of culture and music was well known.

The new sultan is known in international policy circles because of his interactions with world leaders and relations with other royal families, like Britain’s Prince Charles and his wife Camilla.

This experience provided him with “the necessary political gravitas and foreign policy expertise to help steer Oman into a post-Qaboos era,” said Sigurd Neubauer, a Middle East expert, in an analysis for The Arab Gulf States Institute in Washington.

The new ruler of Oman faces monumental challenges in steering his country domestically, as well.

There is discontent among youth in Oman over unemployment and the cost of living. Omanis protested the government as part of the wider Arab Spring unrest in 2011.

Oman has struggled to diversify its economy amid lower oil prices. Sultan Haitham, in addition to being culture minister, was in charge of the country’s Vision 2040 program that lays out strategies to make the country less reliant on oil and gas exports for revenue. It states that 93% of economic activity should be fueled by non-oil sectors and calls for 42% of Omanis to be employed by private businesses rather than the public sector.

Saudi Arabia described Qaboos as the man who modernized Oman. The United Arab Emirates and Egypt described him as a “wise leader.” The UAE, which has had tense relations with Qaboos in the past, announced three days of mourning.

In Yemen, the Houthis, who are at war with Saudi Arabia and the UAE, described him as a leader who worked to end the country’s 5-year-old conflict.

India described him as a beacon of peace, while rival Pakistan called Qaboos a beloved leader and trusted friend.

A statement from U.N. Secretary-General Antonio Guterres said Qaboos “spearheaded the transformation of Oman into a prosperous and stable country. ... earning the respect of his people and those in the region and beyond.”

British Prime Minister Boris Johnson said in a statement that the sultan was “an exceptionally wise and respected leader who will be missed enormously.”

“He leaves a profound legacy, not only in Oman but across the region too,” Johnson said in a statement.

In the United States, former President George W. Bush issued a statement saying Qaboos was “a stable force in the Middle East and a strong U.S. ally.”

“His Majesty had a vision for a modern, prosperous, and peaceful Oman, and he willed that vision into reality,” Bush said, adding that he and his wife visited him in Muscat last fall.