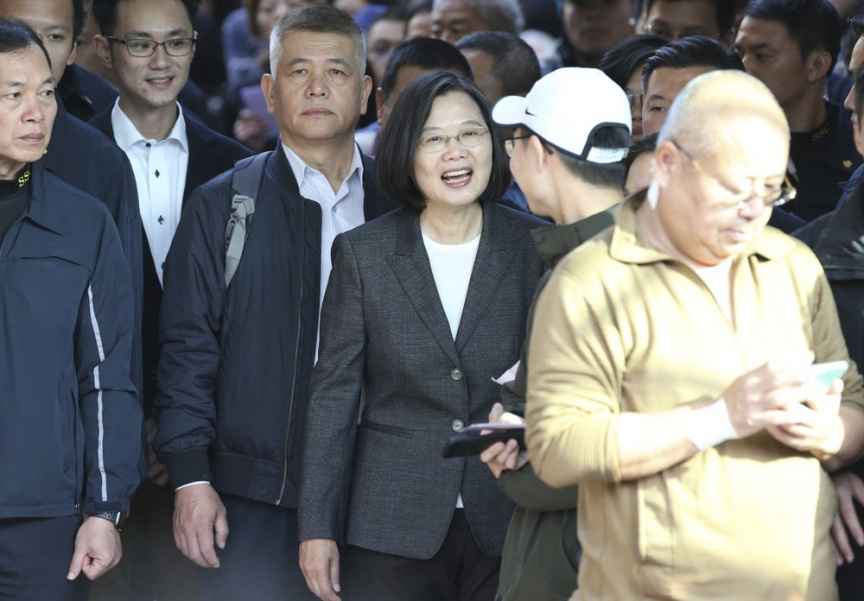 TAIPEI, Taiwan (AP) — The future of Taiwan’s democracy is on the line as the self-ruled island’s voters decide Saturday on whether to give independence-leaning President Tsai Ing-wen a second term.

Taiwan has developed its own identity since separating from China during civil war in 1949 but has never declared formal independence. Beijing still claims sovereignty over the island of 23 million people and threatens to use force to seize control if necessary.

Leo Chang, a 22-year-old first-time voter in the southern city of Kaohsiung, said he cares more about China policy than pocketbook issues.

“This is what the younger generation cares about,” he said. “Honestly, I don’t know much about economy, because I am not yet working. But I do care about the Taiwan consciousness.”

Polls close at 4 p.m. with results expected in the evening.

Tsai and her main challenger, Han Kuo-yu of the Nationalist Party, both voted shortly after polls opened at 8 a.m. Han voted in Kaohsiung, where he is mayor. A third-party candidate, James Soong, is also running but has virtually no chance of winning.

“I hope every citizen can come out and vote,” Tsai said after casting her vote in Taipei, the capital. “You should exercise your rights to make democracy stronger in Taiwan.”

For many in Taiwan, months of protests in Hong Kong have cast in stark relief the contrast between their democratically governed island and authoritarian, communist-ruled mainland China.

Tsai said at a final campaign rally Friday night that the election was a chance to protect Taiwan’s democracy.

The Nationalist Party’s Han has said Taiwan should be more open to negotiations with China, in contrast to Tsai, who has dismissed Beijing’s overtures. At his last rally, attended by hundreds of thousands of people in the southern port city of Kaohsiung, he focused on practical issues such as improving education and the economy.

“I want to attract massive investments. I want products to be exported non-stop,” he said.

The Hong Kong protests have undermined Taiwan support for the “one-country, two-systems” approach Beijing has championed for governing both that former British colony and Taiwan.

Fears of Chinese interference in Taiwan’s politics and an uptick in the economy have helped Tsai regain an edge after a dire electoral setback for her Democratic Progressive Party 14 months ago.

“The reason why I vote for her is for upholding the value of Taiwan’s freedom and democracy and that should not be affected by the other side of the strait (China),” Lucy Ting, a college student, said at Tsai’s rally on Friday.

One 48-year-old Kaohsiung voter said that education policy is on her mind.

“As a parent, I feel that education policies are constantly changing,” said Mary Huang, who works in construction. “I don’t know how to deal with this situation. ... The trends of exams are changing every year, so I am wondering if this could be more stable.”

The Nationalists have struggled to find candidates who can fire up their pro-China supporters and win over young Taiwanese who increasingly favor the DPP.

Still, the election of former lawmaker Han as Kaohsiung’s mayor in December 2018 helped to re-energize the Nationalists, who lost their hold on power four years ago.

Shortly after taking office, Han traveled to China to sign deals to sell 5.2 billion New Taiwan dollars ($165 million) worth of Taiwanese agricultural products. He also met with leading officials for relations with Taiwan, including the head of the Cabinet’s Taiwan Affairs Office, Liu Jieyi, and ranking Communist Party officials in Hong Kong.

That reinforced his image as a candidate backed by and friendly to Beijing. While Han is not expected to win, his party is fighting hard to overturn the DPP’s’majority in the 113-seat parliament, officially known as the Legislative Yuan.

A win by Tsai is anticipated to draw more diplomatic, economic and military pressure from Beijing on the island, in a continuation of President Xi Jinping’s campaign to compel her administration to endorse its insistence that Taiwan is a part of China.

Tsai has refused to do so, maintaining that Beijing has no claim over Taiwan, although her government has repeatedly called for the reopening of talks between the sides without preconditions.

Since its transition to full democracy beginning in the 1980s, Taiwan has increasingly asserted its independent identity from China even though it is not recognized by the United Nations or any major nation.

The island of more than 23 million people exercises all the roles of a sovereign nation, issuing its own passports, maintaining its own military and legal system and serving as a crucial hub in the global high-tech supply chain.

If reelected, Tsai will face challenges in trying to reform the government and economy and push through unpopular cuts in generous civil service pensions.