US strike on Iran could have consequences in North Korea 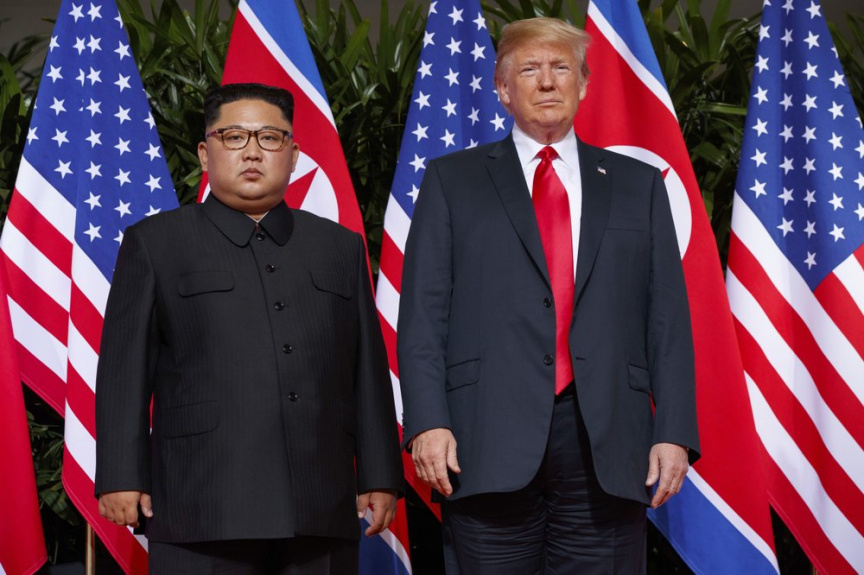 FILE - In this June 12, 2018, file photo, U.S. President Donald Trump, right, meets with North Korean leader Kim Jong Un on Sentosa Island, in Singapore. The U.S. strike that killed Iran’s top military commander may have had an indirect casualty: a diplomatic solution to denuclearizing North Korea. Experts say the escalation of tensions between Washington and Tehran will diminish already fading hopes for such an outcome and inspire North Korea’s decision-makers to tighten their hold on the weapons they see, perhaps correctly, as their strongest guarantee of survival. (AP Photo/Evan Vucci, File)

SEOUL, South Korea (AP) — The U.S. strike that killed Iran’s top military commander may have had an indirect casualty: a diplomatic solution to denuclearizing North Korea.

Experts say the escalation of tensions between Washington and Tehran will diminish already fading hopes for such an outcome and inspire North Korea’s decision-makers to tighten their hold on the weapons they see, perhaps correctly, as their strongest guarantee of survival.

North Korea’s initial reaction to the killing of Gen. Qassem Soleimani has been cautious. The country’s state media was silent for several days before finally on Monday issuing a brief report on the attack that didn’t even mention Soleimani’s name.

The Korean Central News Agency report didn’t publish any direct criticism by Pyongyang toward Washington, instead simply saying that China and Russia had denounced the United States over last week’s airstrike at the airport in Baghdad.

The North’s negotiations with the U.S. have been at a stalemate since last February, when a summit between leader Kim Jong Un and President Donald Trump collapsed over disagreements about exchanging sanctions relief for nuclear disarmament. The North has recently pointed to that lack of progress and hinted it may resume tests of nuclear bombs and intercontinental ballistic missiles.

While the killing of Soleimani may give Pyongyang pause about provoking the Trump administration in such a way, the North ultimately is likely to use the strike to further legitimize its stance that it needs to bolster its nuclear arsenal as a deterrent against American aggression.

The North has often pointed to the demises of Iraqi leader Saddam Hussein and Libyan leader Moammar Gadhafi while justifying its nuclear development, saying they would still be alive and in power had they successfully obtained nuclear weapons and didn’t surrender them to the U.S.

Solemani’s name will soon be mentioned with them too, said Koh Yu-hwan, a North Korea expert at Dongguk University.

“North Korea would say that the ‘imperialist’ nature of the United States would never change, and that there is no other option for them other than to strengthen its nuclear deterrent while bracing for long-term confrontation,” said Koh, an adviser to current South Korean President Moon Jae-in.

It’s clear Pyongyang has been closely watching the developments between Washington and Tehran since the Trump administration in May 2018 abandoned a nuclear agreement Iran reached with world powers in 2015.

Kim and Trump exchanged insults and threats of war during a highly provocative run in North Korean weapons tests in 2017. But then in 2018, Kim initiated diplomatic talks with Washington and suspended nuclear and long-range missile tests. The opening came after months of concerns that the Trump administration could consider preventive military action against the North.

There are views that North Korea’s measured brinkmanship of 2019, highlighted by tests of shorter-range weapons and defiant statements on overcoming U.S.-led sanctions, were influenced by Tehran’s calibrated provocations against Washington, which coincided with efforts to retain European countries participating in the 2015 deal.

Washington’s decision not to retaliate against Iran’s interception of a U.S. surveillance drone last June could have emboldened Pyongyang, which possibly concluded it wouldn’t have to fear U.S. military action as long as it avoids directly threatening American lives or more crucial assets, some experts say.

The U.S. airstrike that took out Soleimani came after Iranian proxies fired rockets onto an Iraqi base, killing an American contractor, and those proxies then helped generate a mob that attacked the U.S. Embassy in Baghdad.

In comments published New Year’s Day, Kim said there were no longer grounds for the North to be “unilaterally bound” to its self-imposed moratorium on nuclear and ICBM tests, which Trump has repeatedly boasted as a major foreign policy accomplishment.

But Kim gave no explicit indication that he was abandoning negotiations entirely or restarting the suspended tests. He seemed to leave the door open to diplomacy, saying North Korea’s efforts to bolster its deterrent will be “properly coordinated” depending on future U.S. attitudes.

The U.S. killing of Soleimani will make the North more hesitant about crossing a metaphorical “red line” with the Trump administration by restarting such tests, said Du Hyeogn Cha, a North Korea expert at Seoul’s Kyung Hee University.

“The airstrike does serve as a warning to North Korea about taking extreme actions as the presumption that the Trump administration refrains from using military force when concerned about consequences has been shattered,” said said Cha, an ex-intelligence secretary to former South Korean President Lee Myung-bak.