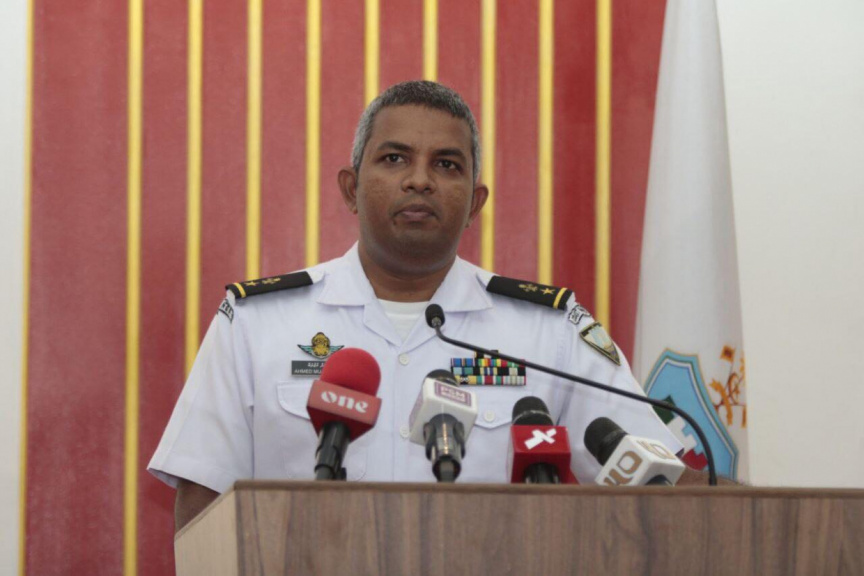 An MNDF official speaking at the news conference held to inform of the search efforts for a man missing at sea from an accident in B. Atoll. The accident occurred between a speedboat and dinghy at sea on January 2, 2020. (Photo/MNDF)

MNDF has stated that the search area for the man lost at sea after a collision between a speedboat and a dinghy has been widened, after no signs of the man were found in initial efforts.

At a news conference held in Bandaarakoshi today, MNDF Coastguard’s principal director Lieutenant Colonel Ahmed Mujuthaba Mohamed stated that additional personnel had been deployed to the area of the accident to search for Nasrullah Abdulla (41 years) from Mushthareege, B. Eydhafushi. Nasrullah was lost at sea after the dinghy he was traveling in collided with a speedboat near B. Dhonfanu last night around 19:00.

MNDF coastguard divers and vessels are still searching for him and have now widened the search area.

Today we began efforts to find the man lost at sea, with two underwater dives. Work was also commenced in the morning to search the surface of the sea for signs with Coastguard patrol vessel “Shaheed Ali” deployed from Hulhumale’ last night and a Remotely Operated Vehicle (ROV).” said Mujuthaba.

Three vessels were involved in the search over water including the patrol vessel “Shaheed Ali”, a fast interceptor craft and a harbor craft. Mujuthaba noted that the search was being carried out three-dimensionally and a helicopter was also being utilized in the efforts.

“The helicopter will search for around two hours. Around two-thirds of the natural atoll will be searched by air. This is because of the chance that man may be floating on the surface or that he may be underwater in a ridge or shelf close to the surface. 120 sq. miles are to be searched by air today.” said Mujuthaba.

Lt. Mujuthaba also said that the speedboat and dinghy were traveling towards each other and that the authorities had not been able to pinpoint the exact location of the collision.

Fishing reels found from the area were also not confirmed by the authorities as items from the dinghy, according to Lt. Mujuthaba. MNDF also shared some pictures of area and rescue efforts.

Two others on the dinghy suffered injuries from the collision. Other than MNDF, dive boats and sea ambulances in the atoll are also taking part in the efforts to find Nasrullah.