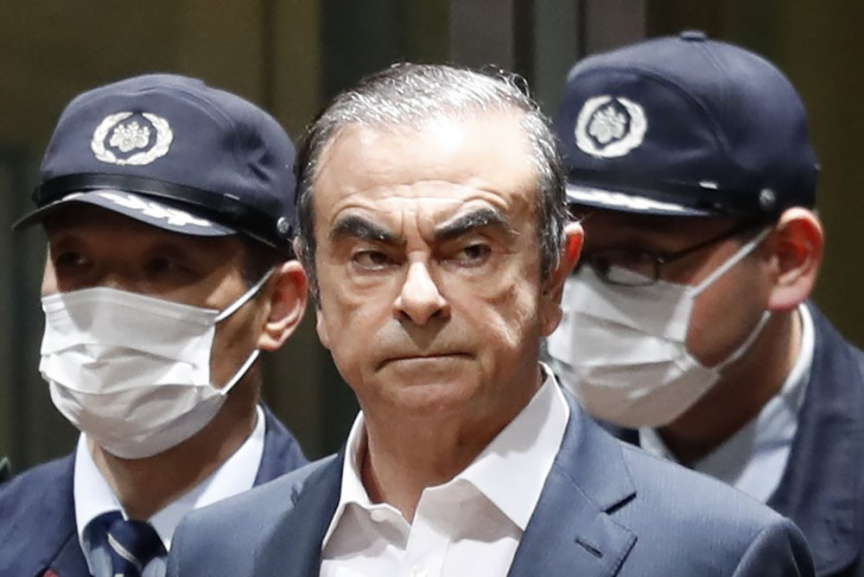 FILE - In this April 25, 2019, file photo, former Nissan Chairman Carlos Ghosn leaves Tokyo's Detention Center for bail in Tokyo. By jumping bail, Ghosn, who had long insisted on his innocence, has now committed a clear crime and can never return to Japan without going to jail. (Kyodo News via AP, File)

BEIRUT (AP) — Interpol issued a wanted notice Thursday for former Nissan chairman Carlos Ghosn, who jumped bail in Japan and fled to Lebanon rather than face trial on financial misconduct charges in a dramatic escape that has confounded and embarrassed authorities.

Lebanese Justice Minister Albert Serhan told The Associated Press in an interview that Lebanon “will carry out its duties,” suggesting for the first time that the automotive titan may be brought in for questioning. But he said Ghosn entered the country on a legal passport, and he appeared to cast doubt on the possibility Lebanon would hand Ghosn over to Japan.

The Interpol notice is the latest twist in Ghosn’s daring escape, which spanned three continents and involved private planes, multiple passports and international intrigue. Turkey made several arrests Thursday as part of an investigation into how he passed through the country.

Ghosn’s arrival in Lebanon jolted the nation, already in the midst of a crippling political impasse and its worst economic crisis in decades.

Lebanon must now decide how to deal with the Interpol-issued Red Notice, which is a non-binding request to law enforcement agencies worldwide that they locate and provisionally arrest a fugitive. A Red Notice is not an arrest warrant and does not require Lebanon to arrest Ghosn.

Shortly afterward, Ghosn issued a statement — his second this week — seeking to distance his Lebanese wife and family from any role in his escape.

Ghosn, who is Lebanese and also holds French and Brazilian passports, was set to go on trial in Japan in April. He arrived in Lebanon on Monday via Turkey and hasn’t been seen in public since. In a statement Tuesday, he said he fled to avoid “political persecution” by a “rigged Japanese justice system.”

How he was able to flee Japan, avoiding the tight surveillance he was under while free on 1.5 billion yen ($14 million) bail, is still a mystery, though Lebanese authorities have said he entered the country legally on a French passport.

His lawyer in France, Francois Zimeray, told Japanese public broadcaster NHK TV that he was in frequent contact with Ghosn since he arrived in Lebanon, and Ghosn appeared to be filled with “a fighting spirit.” Ghosn was eager to start clearing his name at the news conference next week, Zimeray said.

Ghosn, who grew up in Beirut and frequently visited, is a national hero to many in this Mediterranean country with close ties to senior politicians and business stakes in a number of companies. People take special pride in the auto industry executive, who is credited with leading a spectacular turnaround at Nissan beginning in the late 1990s and rescuing the automaker from near-bankruptcy.

Even as he fell from grace internationally, politicians across the board mobilized in his defense after his arrest in Japan in November 2018, with some suggesting his detention may be part of a political or business-motivated conspiracy. Lebanon’s foreign minister repeatedly called for his release.

Serhan said prosecutors will summon Ghosn and listen to him, and “at a later stage if there are any measures to be taken, then the precautionary measures will be taken.”

“We are a country of law and respect the law and ... I can confirm that the Lebanese state will implement the law,” the justice minister said.

At the same time, Serhan said that Lebanon has not received an official extradition request from Japan, and he noted that the two countries do not have an extradition treaty.

“Mr. Ghosn arrived to Lebanon as any ordinary citizen. ... Lebanese authorities have no security or judiciary charges against him. He entered the border like any other Lebanese using a legal passport,” he added.

There were mixed reactions in Lebanon to Ghosn’s return, with some cheering his freedom and others lamenting his arrival as yet another ’’corrupt″ Lebanese to contend with.

“I like this man. He has a brain and he developed Nissan and Renault from the ground up. He came back to his mother country which embraced him,” said Ghassan al-Baba, a 52-year-old taxi driver and former employee of General Motors in Kuwait.

“He is a part of the corrupt, but the corrupt from the outside. Here, he didn’t do anything wrong. On the contrary, he is going to bring money to Lebanon,” he said, reflecting a longstanding Lebanese hope that Ghosn would one day help rescue Lebanon’s failing economy.

Sadiq Taher, a 42-year-old contractor among anti-government protesters who have been demonstrating against corrupt Lebanese politicians for weeks, said Ghosn is crooked on a global level and Lebanon does not need more “financial whales.”

In Turkey, the state-run Anadolu Agency said Turkish authorities detained seven people as part of an investigation into how Ghosn fled to Lebanon via Istanbul. The private DHA news agency reported that those detained are four pilots, a cargo company manager and two airport workers.

Japanese news reports said that there were no official records in Japan of Ghosn’s departure but that a private jet had left from a regional airport to Turkey. The Hurriyet newspaper said the plane carrying Ghosn landed at Istanbul’s Ataturk Airport at 5:30 a.m. on Dec. 29. Ghosn was not registered upon landing and was smuggled onto another plane that left for Lebanon, the paper reported.

Ghosn, who is charged in Japan with under-reporting his future compensation and breach of trust, has repeatedly asserted his innocence, saying authorities trumped up charges to prevent a possible fuller merger between Nissan Motor Co. and Renault.

In another twist, two Lebanese lawyers submitted a report to the Public Prosecutor’s Office against Ghosn Thursday, saying he violated Lebanese law by visiting Israel. ’The two countries are in a state of war. Ghosn visited Israel in 2008 and met officials including the prime minister and the president. At the time he announced the launch of electric cars in Israel.

In Beirut’s affluent residential neighborhood of Ashrafieh, several security guards stood outside Ghosn’s rose-colored mansion Thursday along with about two dozen journalists. Since news of his arrival, journalists, including many from the Japanese media, have flocked outside the building, trying to capture any proof of his presence.

At one point, a Lebanese lawyer who said he worked for Nissan appeared, claiming the building belonged to the auto company, not to Ghosn.

One of Ghosn’s neighbors, who spoke on condition of anonymity, said they are “split as to whether they are with or against his return.”

“It sounds like his escape could be the new Netflix show,” his wife joked.

3rd night of clashes in Lebanon over new PM