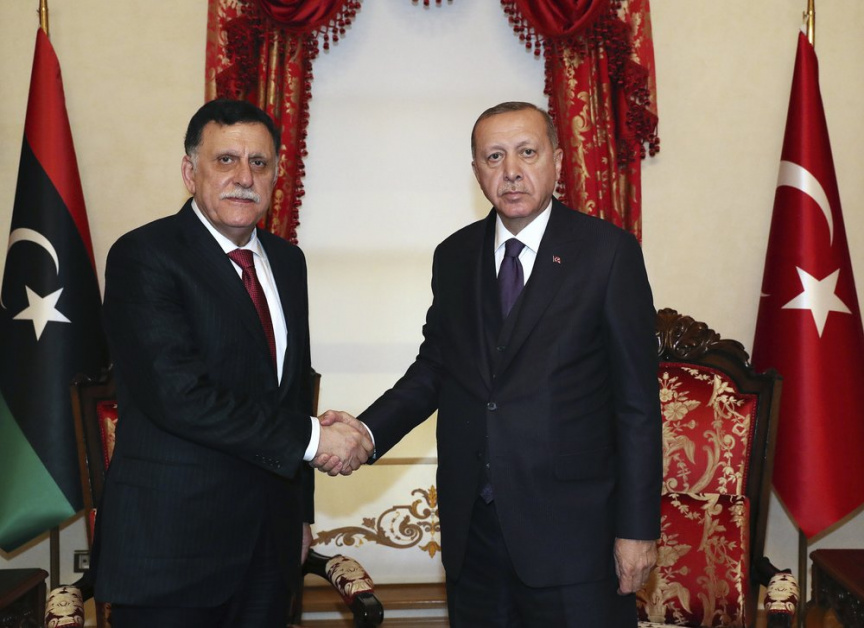 Turkey's President Recep Tayyip Erdogan, right, shakes hands with Fayez al Sarraj, the head of Libya's internationally recognised government, prior to their talks in Istanbul, Sunday, Dec. 15, 2019. Turkey and Libya had reached an agreement on the delineation of maritime boundaries in the Mediterranean, in November. (Turkish Presidency via AP, Pool)

MOSCOW (AP) — The leaders of Russia and Turkey discussed the fighting in Libya in a phone call Tuesday, the Kremlin said.

It said in a statement that Russian President Vladimir Putin and Turkish President Recep Tayyip Erdogan voiced their readiness to help establish contacts between the warring parties and expressed support for mediation efforts by the United Nations and Germany.

Libya plunged into turmoil after the 2011 civil war that ousted and killed long-time dictator Moammar Gadhafi. The country has been split into two parts, with a weak U.N.-supported government led by Prime Minister Fayez Sarraj and a rival administration in the east led by the self-styled Libyan National Army chief, Gen. Khalifa Hifter.

Hifter on Thursday declared a final push to take Tripoli from Sarraj’s government, unleashing heavy clashes on the southern edges of the city.

Sarraj’s government has been backed by Italy, Turkey and Qatar, while Hifter’s army has been supported by France and some key Arab countries, including Egypt, the United Arab Emirates and Saudi Arabia.

Russia has maintained contacts with both conflicting parties in Libya, but the government in Tripoli has recently charged that Russian military contractors were fighting alongside Hifter — which Moscow has denied.

Video of child refugee in Libya sheds light on abuse