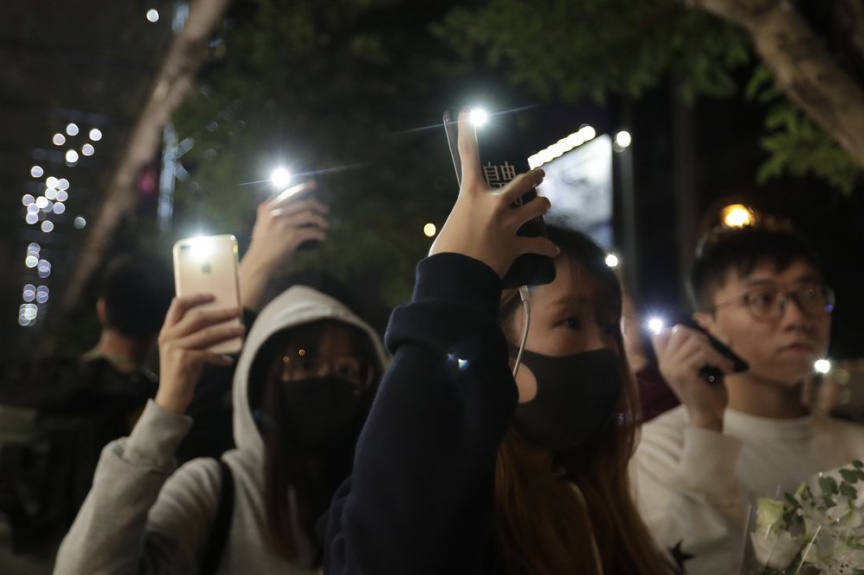 Attendees hold up their lit mobile phones to mark the six months anniversary memorial for a man who fell to his death while hanging a protest banner against an extradition bill, in Hong Kong Sunday, Dec. 15, 2019 in Hong Kong. (AP Photo/Mark Schiefelbein)

HONG KONG (AP) — Police fired tear gas against protesters in Hong Kong before meetings Monday between the territory’s leader and Communist Party officials in Beijing, ending a lull in what have become regular clashes between riot squads and demonstrators.

Police said they fired the choking gas after unrest erupted Sunday night in the Mongkok district of Kowloon.

The violence and scattered confrontations in shopping malls earlier Sunday, where police also squirted pepper spray and made several arrests, ended what had been a lull of a couple of weeks in clashes between police and protesters.

The uptick in tension came as Hong Kong leader Carrie Lam was in Beijing on Monday to brief President Xi Jinping on the situation in the semi-autonomous Chinese territory.

Hong Kong’s protest movement erupted in June against now-scrapped legislation that would have allowed criminal suspects to be extradited for trial in Communist Party-controlled courts in mainland China.

It has snowballed into a full-blow challenge to the government and Communist leaders in Beijing, with an array of demands, including that Hong Kong’s leader and legislators all be fully elected.