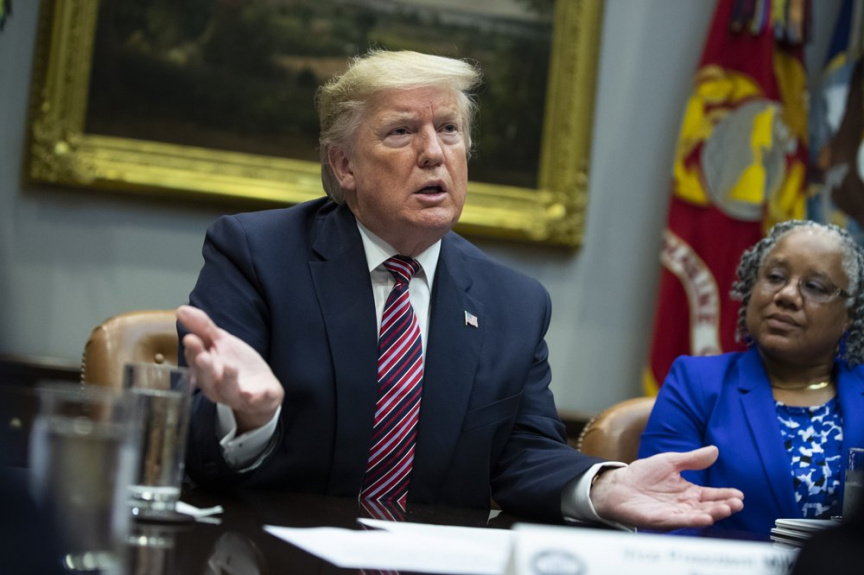 WASHINGTON (AP) — House Democrats are bringing the impeachment focus back to Russia as they draft formal charges against President Donald Trump.

Speaker Nancy Pelosi is connecting the dots — “all roads lead to Putin,” she says — and making the argument that Trump’s pressure campaign on Ukraine was not an isolated incident but part of a troubling bond with the Russian president reaching back to special counsel Robert Mueller’s findings on the 2016 election.

“This isn’t about Ukraine,” she explained a day earlier. ”’It’s about Russia. Who benefited by our withholding of that military assistance? Russia.”

The framing is taking on greater urgency and importance, both as a practical matter and a political one, as Democrats move seriously into writing the articles of impeachment.

It’s an attempt to explain why Americans should care that Trump pushed Ukraine to investigate rival Joe Biden while withholding $400 million in military aid that Congress had approved for the struggling Eastern European ally fighting a border war with Russia.

“Sometimes people say, ‘Well I don’t know about Ukraine. I don’t know that much about Ukraine,’” Pelosi said Thursday after announcing the decision to draft formal charges. “Well, our adversary in this is Russia. All roads lead to Putin. Understand that.”

At the same time, tracing the arc of Trump’s behavior from the 2016 campaign to the present, stitches it all together. And that helps the speaker balance her left-flank liberals, who want more charges brought against Trump, including from Mueller’s report, and centrist Democrats who prefer to keep the argument more narrowly focused on Ukraine.

Pelosi and her team are trying to convey a message that impeachment is indeed about Ukraine — Trump’s asking-for-a-favor phone call that sparked the probe — but also about a pattern of behavior that could stoke renewed concern about his attitude toward Russia ahead of the 2020 election.

“It shows that a leopard doesn’t change his spots,” said Rep. Eric Swalwell, D-Calif., a member of the Intelligence Committee, which drafted the 300-page report on the Ukraine inquiry that serves as the foundation for the impeachment proceedings.

With articles of impeachment coming in a matter of days and votes in the House expected by Christmas, Trump’s team is hardening its argument that the president did nothing wrong. They say voters will stick with him at the Democrats’ expense next November.

Late Friday, White House Counsel Pat Cipollone informed the Judiciary Committee that the administration would not be participating in upcoming hearings, decrying the proceedings as “completely baseless.”

And Trump’s campaign announced new rallies taking the case directly to voters — as well as a new email fundraising pitch that claims the Democrats have “gone absolutely insane.”′

“The Democrats have NO impeachment case and are demeaning our great Country at YOUR expense,” Trump wrote in the email to supporters. “It’s US against THEM.”

Democratic lawmakers and aides are working behind closed doors over the weekend as the articles are being drafted and Judiciary Committee members are preparing for hearings and votes expected next week.

The articles are likely to encompass two major themes — abuse of office and obstruction — as the drafters strive to reach the Constitution’s bar of “treason, bribery or other high crimes and misdemeanors.″ But they could be divided up into multiple articles.

Democrats argue that Trump abused his office when he asked Ukraine President Volodymyr Zelenskiy for a “favor” during a July 25 phone call congratulating the newly-elected comedian-turned-president. Trump wanted Ukraine to announce it was investigating Democrats including Biden, according to a rough transcript released under pressure by the White House.

They might also include a charge of “bribery,” based on Trump’s decision to withhold the military aid and stall on granting Zelenskiy a coveted White House visit the new president was seeking as a show of support from the U.S., its most important ally. The money was eventually released once Congress began investigating in September. The meeting never happened.

There is still robust internal debate among House Democrats over how many articles to write and how much to include — and particularly whether there should be specific mention of Mueller’s findings from his two-year investigation into Trump’s possible role in Russia’s 2016 election interference.

The special counsel could not determine that Trump’s campaign conspired or coordinated with Russia. However, Mueller said he could not exonerate Trump of obstructing justice in the probe and left it for Congress to determine.

Pelosi is particularly protective of the views of the new class of freshman lawmakers, who won elections in 2018 to give Democrats the House majority and will be up for re-election in 2020.

Many of those Democrats who supported launching the impeachment probe have yet to say whether they will vote to impeach.

“I can’t say if I’d vote for or against something until I see it,” said freshman Rep. Joe Cunningham, D-S.C. “Some of it seems connected. Some of it doesn’t.”

Democrats expect there will be two to four articles of impeachment against the president. Merging the Mueller findings into the overall charges by making the direct link to Ukraine might be one way to reach all sides.

Said Rep. Jamie Raskin, D-Md., a member of the Judiciary Committee, “You know we have to explore the possibility that the Ukraine episode is not some kind of aberrational outburst but rather reflective of a continuing course of misconduct.”