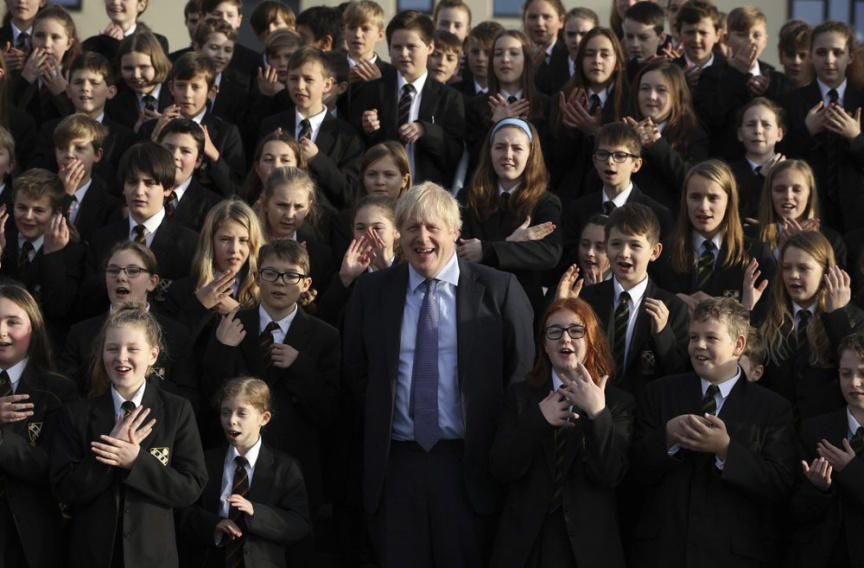 Johnson was accused of running scared of scrutiny after he declined to take part in a debate alongside his main opponent, Jeremy Corbyn of the Labour Party, and other party leaders, and refused to commit to a one-on-one TV interview.

With most polls showing a double-digit lead for Johnson’s Conservatives, the party is keen to limit the prime minister’s opportunities for gaffes and slip-ups.

As well as skipping the climate debate, Johnson is the only main leader not to have agreed — so far — to a one-on-one interview with BBC journalist Andrew Neil. Corbyn was subjected to an intense grilling by Neil earlier this week about allegations of anti-Semitism within the Labour Party.

The Conservatives complained to Britain’s broadcast regulator after Channel 4 refused to let another government minister appear instead of Johnson at the climate debate. The channel said it was a leaders-only event.

Those taking part promised to slash Britain’s carbon emissions to zero, though the parties have set different target dates: 2030 in the case of the Green Party, “within the 2030s” for Labour and 2045 for the Liberal Democrats and Scottish National Party. The Conservatives say they will do it by 2050.

Johnson insisted Thursday that he would do “many, many interviews over the course of the next few days and I’m sure that people are having all sorts of conversations right now about who I’m going to be talking to, when and where, and I look forward to it very much.”

Jo Swinson, leader of the centrist Liberal Democrats, earlier accused Johnson of spewing serial falsehoods and dragging the office of prime minister “through the mud.”

She said Johnson can’t be trusted because he vowed to lead Britain out of the European Union by Oct. 31 - and didn’t - and said he would never ask the EU to delay Brexit - but did.

Johnson has faced questions about his character throughout the campaign. The prime minister has a history of making offensive remarks, including a newspaper column last year in which he compared women who wear face-covering veils to “letter boxes.”

The Labour Party unearthed an article Johnson wrote in the conservative weekly magazine, The Spectator, in 1995 in which he called the children of single mothers “ill-raised, ignorant, aggressive and illegitimate.”

Johnson accused his opponents of trying to “disinter and distort pieces that are almost 25 years old.”

He also said he had “never tried to deceive the public and I’ve always tried to be absolutely frank.”

Labour, meanwhile, is struggling to satisfy supporters who oppose Brexit, as well as those who want to leave the EU.

The party says that if it wins the election it will negotiate a new divorce deal with the EU, then give voters a choice in a new referendum between leaving the bloc on those new terms or remaining.

A respected economic think-tank cast doubt Thursday on the spending pledges of both main parties, Conservatives and Labour, concluding that neither was being honest with voters.

The Institute for Fiscal Studies warned it was “highly likely” that a Conservative government would end up spending more than the party’s platform implied, while Labour would not be able to deliver on a promise to raise investment and revenue without taxing middle-income earners, rather than just the rich and on big business.

Parties court the approval of the IFS, seeking its imprimatur on their spending plans. But the think-tank concluded the promises didn’t match the math.

The IFS analysis outlined the scope of the main parties’ drastically different views of the future, arguing the choice between the Conservatives and Labour could “hardly be starker.’’ With the exception of health, the IFS concluded that if the Conservatives formed the next government, public spending would be 14% lower in 2023-24 than it was when the party took office in 2010.

“No more austerity perhaps, but an awful lot baked in,” the IFS’s Johnson said of the Tories.

Labour on the other hand, would raise both taxes and spending to peacetime highs. The party has pledged a sweeping expansion of the state, including the nationalization of the railways and key utilities.

“Labour would not be able to deliver investment spending increases on the scale they promise,’’ the IFS director said. “The public sector doesn’t have the capacity to ramp up that much, that fast.’’

Britons will vote Dec. 12 to fill all 650 seats in the House of Commons. Johnson wants to secure a majority in the election so he can push through the Brexit divorce deal he negotiated last month with the EU. Under the terms of that deal, the U.K. would leave the EU on Jan. 31 but remain part of the EU’s single market, and bound by the bloc’s rules, until the end of 2020.

UK: Bridge attacker had been jailed for terror crimes