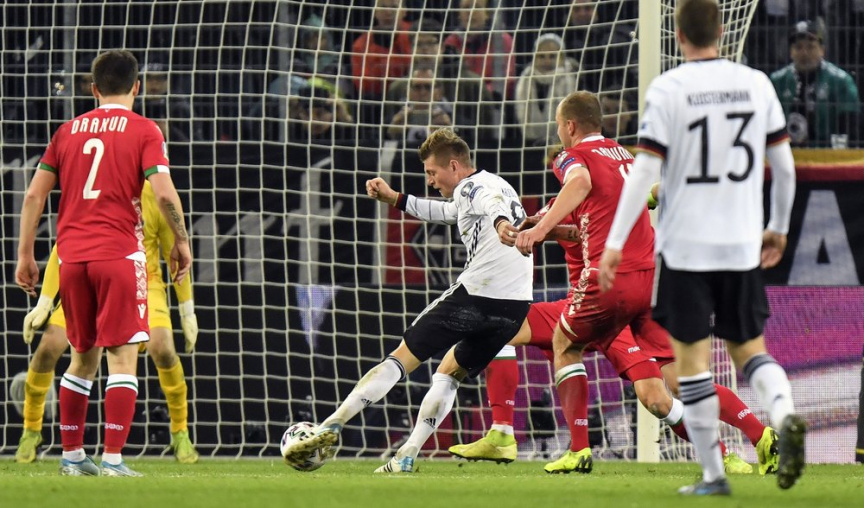 BERLIN (AP) — Germany, the Netherlands, Austria and Croatia qualified for the 2020 European Championship on Saturday.

For the Germans, it’s a record 13th straight time that they will appear at the tournament, continuing a run going back to 1972.

The three-time champion advanced with a 4-0 win over Belarus on Saturday, with Toni Kroos scoring twice and steering his team top of Group C. Second-place Netherlands also qualified despite a 0-0 draw with Northern Ireland in Belfast. Northern Ireland captain Steven Davis missed a penalty in the first half.

For the Dutch, a former soccer powerhouse, it will be their first major tournament since the 2014 World Cup.

Austria joined already qualified Poland from Group G with a 2-1 win over visiting North Macedonia. Poland won 2-1 for its first win in Israel since 1988.

Croatia booked its place as Group E winner with a 3-1 win at home over Slovakia.

Injury-hit Germany started with an unfamiliar central defensive pair of Borussia Mönchengladbach’s Matthias Ginter and Freiburg’s Robin Koch, the latter making only his second appearance and his first in a competitive game for Germany.

There was little sign of inexperience against defensively minded Belarus, however, with Joachim Löw’s team dominating with good chances early on for Timo Werner, Serge Gnabry and Kroos.

Manuel Neuer pulled off a brilliant flying save to deny Igor Stasevich with the visitors’ first chance, just before Matthias Ginter made the breakthrough in the 41st minute.

Leon Goretzka scored four minutes after the break, and Ginter set up Kroos to mark his 95th game for Germany with the third goal in the 55th. That set off fans’ celebrations with Mexican waves going around the stadium.

Stasevich had a chance to pull one back from the penalty spot after a clumsy challenge from Koch, but Neuer guessed the right way.

Kroos wrapped up the scoring with a fine second goal in the 83rd, turning with a left-right combination to elude two defenders before shooting with his left boot inside the post.

“We’ll see how far we’ve come shortly before the tournament. I wouldn’t count us among the top favorites at the moment. But that doesn’t mean anything,” Kroos said.

Gareth Bale returned from injury and helped Wales keep its automatic qualification hopes alive with a 2-0 win at Azerbaijan in Group E.

Kieffer Moore and Harry Wilson scored in the first half to give Wales its first away win in more than a year.

Third in Group E with 11 points, Wales can secure automatic qualification for Euro 2020 with a win in its final game on Tuesday over second-place Hungary on 12 points.

Bale hadn’t played for a month due to a calf injury, but the Real Madrid winger played just under an hour in Baku before being taken off by coach Ryan Giggs to safeguard his availability for the Hungary showdown in Cardiff. Bale was a booking away from suspension.

The Belgians’ ninth win from nine qualifying games ensure they top Group I and join Italy as one of the seeded teams in the finals’ draw on Nov. 30.

Spain routs Romania 5-0 in its last qualifier for Euros