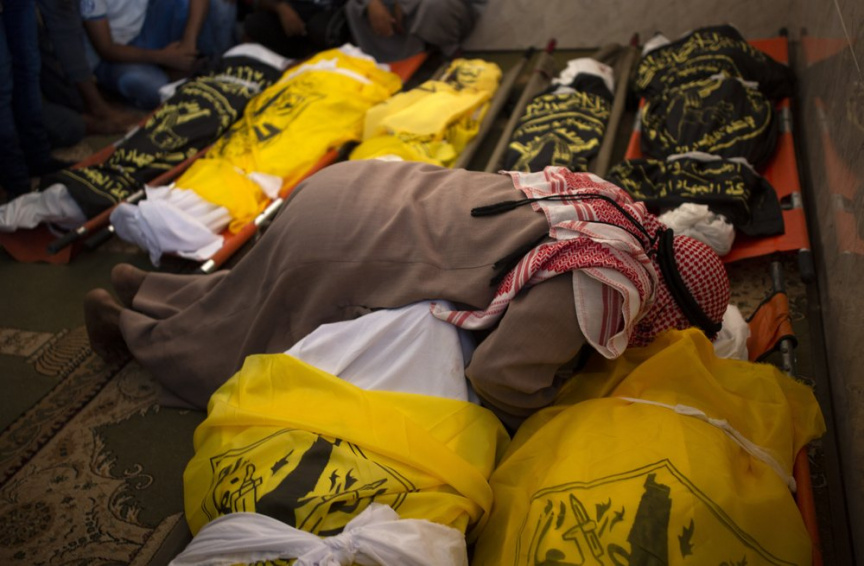 Palestinians mourn over the bodies of Rasmi Abu Malhous and seven of his family members who were killed in overnight Israeli missile strikes that targeted their house, in a mosque during their funeral in town of Deir al-Balah, central Gaza Strip, Thursday, Nov. 14, 2019. (AP Photo/Khalil Hamra)

The firings early Saturday raise more doubts about the fate of a fragile cease-fire that was announced Thursday.

The Egyptian-brokered lull ended two days of escalation between Israel and the Islamic Jihad.

A rare Israeli targeted killing of a senior commander from the Iranian-backed group triggered the worst bout of cross-border fighting in years.

Hamas, the larger Islamic group controlling Gaza, stayed on the sideline, fearing its participation could cause an all-out war.

The Islamic Jihad said it launched hundreds of rockets toward Israel in retaliation for the killing of the commander Bahaa Abu el-Atta.

Subsequent Israeli airstrikes killed 34 Palestinians, including eight children and three women. There were no Israeli deaths.