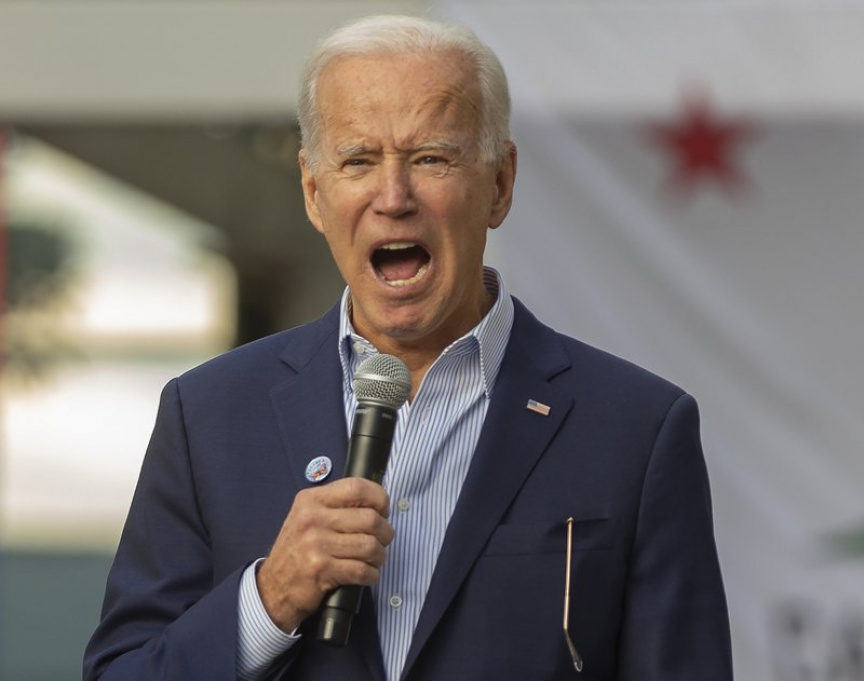 FILE - In this Nov. 14, 2019, file photo, Democratic presidential candidate former Vice President Joe Biden addresses the Santa Clarita, Calif., shooting at Saugus High School, during a campaign rally at Los Angeles Trade Technical College in Los Angeles. North Korea called Biden a “rabid dog” that “must be beaten to death with a stick” in its latest swipe against foreign and political leaders it sees as hostile to the North’s leadership. The commentary published by Pyongyang’s official Korean Central News Agency said the U.S. presidential hopeful “reeled off a string of rubbish against the dignity” of the North’s supreme leadership and deserves “merciless punishment.” (AP Photo/Damian Dovar

SEOUL, South Korea (AP) — North Korea called former U.S. Vice President Joe Biden a “rabid dog” that “must be beaten to death with a stick” in its latest swipe against foreign and political leaders it sees as hostile to the North’s leadership.

The commentary by Pyongyang’s official Korean Central News Agency said the U.S. presidential hopeful “reeled off a string of rubbish against the dignity” of the North’s supreme leadership, an act it said deserves “merciless punishment.”

It referred to him only with his surname and as vice president under Barack Obama, and in some versions spelled his name as “Baiden.”

The North correctly spelled Biden’s name in May when it labeled him a “fool of low IQ” after he called North Korean leader Kim Jong Un a tyrant during a speech.

North Korea often insults foreign leaders and politicians over what it sees as slanderous remarks toward its leadership or hostile policies against its government. It has made racist or sexist diatribes against Obama and former South Korean President Park Geun-hye, the country’s first female leader.

Its frequent insults against Trump, including famously calling him a “dotard,” turned to praise after he in 2018 made diplomatic overtures to North Korean leader Kim Jong Un that resulted in their three summits, including one brief handshake at the Korean Demilitarized Zone.

“Anyone who dare slanders the dignity of the supreme leadership of the D.P.R.K, can never spare the D.P.R.K’s merciless punishment whoever and wherever,” said the North Korean statement, referring to the country by its formal name, the Democratic People’s Republic of Korea.

“Rabid dogs like Baiden can hurt lots of people if they are allowed to run about. They must be beaten to death with a stick, before it is too late,” it said.

It wasn’t immediately clear which of Biden’s comments provoked North Korea’s anger. The Democrat has accused Trump of cozying up to “dictators and tyrants” and has been highly critical of his summitry with Kim, calling the meetings “three made-for-TV summits.”

South Korea’s Yonhap News Agency speculated that North Korea by insulting Biden was trying to appeal to Trump, who has continued to describe his personal relationship with Kim as good despite a stalemate in nuclear negotiations over disagreements in exchanging sanctions relief and disarmament steps.

“It’s becoming more and more obvious that repugnant dictators, as well as those who admire and ‘love’ them, find Joe Biden threatening,” said Andrew Bates, a Biden campaign spokesman. “That’s because he’d restore American leadership in the world on day one by putting our security, interests and values at the heart of our foreign policy.”

Even while North Korea has praised Trump, it criticized members of his administration seen as holding a hard line against North Korea, such as former national security adviser John Bolton. Last week, it called Japanese Prime Minister Shinzo Abe an “idiot and villain” after he criticized a North Korean weapons test.

Kim vows to fight US sanctions